Some Y chromosomes mysteriously DISAPPEAR in 44% of men by the time they reach 70 and it could increase their risk of cancer, study finds

Men’s Y chromosomes are disappearing as they get older and could be putting them at a greater risk of cancer, a study has found.

The Y chromosome is considered the male chromosome and women don’t have it – they famously have XX chromosomes while men have XY.

But researchers have found many men are lacking Y chromosomes in some of their white blood cells, as well.

The team who made the discovery said this bizarre change may be a sign the men’s DNA was unstable and the body was allowing random genetic mutations to add up. 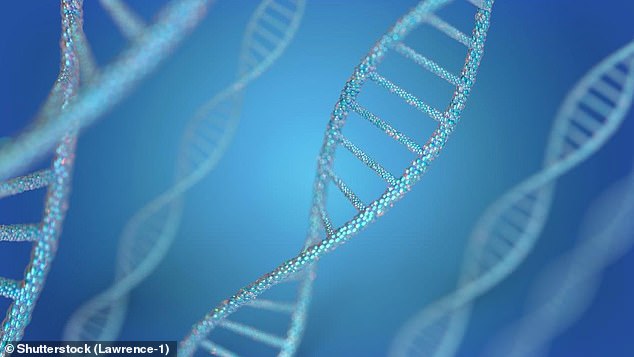 Researchers found that one in five men in a sample of more than 200,000 had started to lose the Y chromosomes from the DNA in some of their blood cells (stock image)

Scientists led by the University of Cambridge did the study on data from the UK Biobank, which contains the DNA of 500,000 volunteers, The Atlantic reported.

They found that 20 per cent of men of all ages had lost some of the Y chromosomes in their blood.

And this proportion had doubled by the time the men were in their 70s.

It was not clear why the chromosomes were disappearing but the researchers said it could be a sign of another problem inside the body which was allowing mutations to accumulate.

Random mutations are normal and people end up with more mutated cells as they age, and this could simply be an example of that – it’s one of the most commonly observed ones.

Dr John Perry, a Cambridge geneticist told the Atlantic: ‘The more you age, the more errors have taken place in cell division.’

Scientists have in the past seen that women have lost X chromosomes from their blood because of mutations.

Some men were more susceptible to losing their chromosomes than others, the researchers said, and these same men also appeared to have a higher risk of glioma brain cancers and kidney cancer.

As well as the genetic difference, the fact that the body was allowing the mutations which phased out the Y chromosome, suggested cancer risk could be increased.

Both chromosome loss and cancr are rooted in DNA errors and could be linked, the scientists suggested.

And another researcher from the Dana-Farber Cancer Institute in Boston, David Steensma, suggested losing the Y chromosomes could give cells some kind of unseen advantage.

This would allow them to keep multiplying in a microscopic version of evolution, and could explain why the mutation was so common.

The study was published in the scientific journal Nature.

The Y chromosome is one of two sex chromosomes found in humans – the other is the X chromosome.

It is the only chromosome in an organism that isn’t essential for life – women survive just fine without one, after all.

In humans, the 22 other pairs of chromosomes – the autosomes – are identical.

The Y chromosome spans more than 59 million building blocks of DNA and represents almost 2 percent of the total DNA in cells.

But the human Y-chromosome is still one of the smallest in the genome.

It is carried by roughly half of a man’s sperm, and dictates whether a child will be male or female.

Despite this, it carries very little other important information, and researchers think it is quickly disappearing.

If the same rate of degeneration continues, the Y chromosome has just 4.6 million years left before it disappears completely.

But the Y chromosome hasn’t always been so small.

It was once the size of the X chromosome and contained all the same genes.

The problem, however, is that  Y chromosomes are only ever found as a single copy, passed from fathers to their sons, rather than a pair

This means that genes on the Y chromosome cannot undergo something known as ‘genetic recombination’.

This is switch of genes that takes place in each generation which helps to eliminate damaging gene mutations.

Related posts:
Tags: 44%, 70, by, chromosomes, DISAPPEAR, in, Men, mysteriously, of, to, Up, Y
Medications
Health Problems