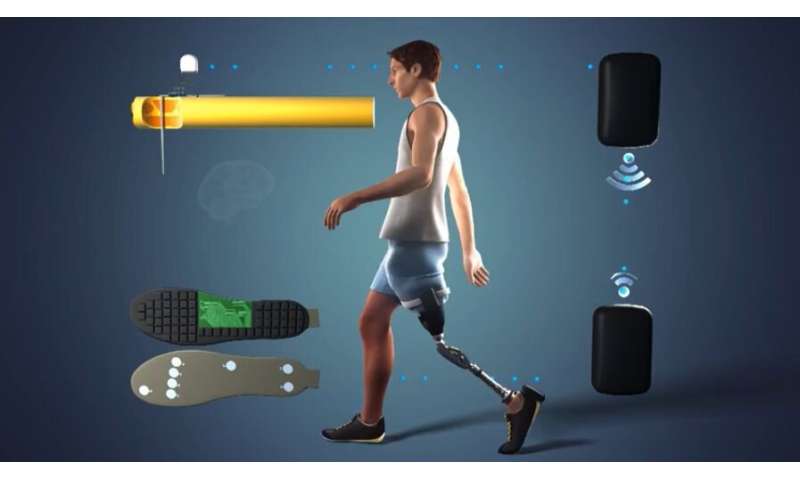 While walking, people with intact legs can feel when they move their knee or when their feet touch the ground. The nervous system constantly draws on sensory feedback of this sort to control muscles precisely. People using a leg prosthesis, however, do not know precisely where the prosthesis is located, how it is moving, or what type of terrain it is standing on. They often cannot trust their prosthesis completely when walking, leading them to rely too often on their intact leg, which in turn reduces their mobility and causes them to tire quickly.

A simple walk on pebbles or sand, for example, can prove very exhausting for people using a prosthesis. Furthermore, people with amputations can experience phantom limb pain, a condition that existing medications often cannot treat. Savo Panic, who experiences this phenomenon, says he wakes up at night due to the phantom pain: “The toe that I don’t have hurts. My big toe, foot, heel, ankle, calf—they all hurt, and I don’t even have them.”

An international team of researchers led by ETH Zurich and Lausanne-based start-up company Sen-sArs has now developed an interface to connect a leg prosthesis with the residual nerves present in the user’s thigh, thus providing sensory feedback. In a study conducted in collaboration with the University of Belgrade, the scientists tested this neurofeedback system with two volunteers who have an above-knee leg amputation and use a leg prosthesis, Panic among them.

The solution benefited the amputees in a variety of ways, as the researchers reported in the latest issue of the journal Nature Medicine. “This proof-of-concept study shows how beneficial it is to the health of leg amputees to have a prosthesis that works with neural implants to restore sensory feed-back,” says Stanisa Raspopovic, a Professor at the Institute of Robotics and Intelligent Systems at ETH Zurich.

Transforming artificial signals into natural ones

To provide the nervous system with sensory information, the scientists began with a commercially available high-tech prosthesis. They attached tactile sensors to the sole of the prosthetic foot, and collected the data on knee movement provided by the prosthesis’s electronic knee joint.

For the three months that the experiment lasted, surgeons placed tiny electrodes in each volunteer’s thigh and connected them to the residual leg nerves. “The goal of the surgery was to introduce electrodes in the right places inside the nerve to allow the restoration of lifelike sensory feedback, and to allow the stability of the electrodes,” said Marko Bumbasirevic, professor and orthopaedic microsurgeon at the Clinical Centre of Serbia in Belgrade, who was the clinician responsible for the electrode implant. The electrodes were developed by scientists from the University of Freiburg, and the prosthesis came from the prosthetic company Össur; both were actively involved in the project.

The research team developed algorithms to translate the information from the tactile and motion sensors into impulses of current—the language of the nervous system—which were delivered to the residual nerve. Then, nature does the rest: The signals from the residual nerves are conveyed to the person’s brain, which is thus able to sense the prosthesis and helps the user to adjust their gait accordingly. The machine and the body are finally connected.

As part of the study, the volunteers underwent a series of tests—alternating trials with and without neurofeedback. The results made it clear just how advantageous the feedback was: Walking with neurofeedback was physically much less demanding, as shown by the significant reduction in the volunteers’ oxygen consumption while walking.

Ambulation with neurofeedback was less strenuous mentally, as well, as the researchers showed with brain activity measurements during the trials. The volunteers didn’t have to concentrate as hard on their gait, which meant that they were able to devote more of their attention to other tasks.

In one difficult test, the volunteers had to walk over sand, and again, the feedback enabled them to walk considerably faster. In surveys, the volunteers stated that the neurofeedback greatly increased their confidence in the prosthesis.

The interface with the nervous system can also be used to stimulate the nerves independently of the prosthesis. Before they started the trial, both volunteers complained of phantom limb pain. Over the course of a one-month therapy programme with neurostimulation, one volunteer reported considerably reduced pain; in the other, Panic, the pain disappeared completely. “Since I have started this treatment programme, after having received electrical stimulations, I don’t feel any phantom pain,” he says.