One of the most interesting parts of deepening your relationship with your partner is when you start to let them into the unfiltered, everyday drudgery of your life. And if you’re a person who gets a period, your partner is bound to eventually learn a few things about how you manage it (your favorite products, must-have snacks and comfort items, etc.). And if they are a person who doesn’t get periods (or wasn’t raised closely or previously involved with someone who does) there might be a learning curve for them to become well-versed in the whole process.

That said, some people never get on that level or drag their feet — or, there might be some weird stigma in the room to contend with. One Redditor opened up about this process sharing that her “EXTREMELY hygienic” (more on that later) partner was horrified by the period underwear she keeps on deck for when she’s bleeding each month and insisted she throw them out.

“He came across one of my pairs of panties that I specifically only wear during that time of the month. I’m certain ladies will understand that we keep panties separate for periods than we do for when we aren’t. AKA I have my ugly or maybe blood stained pairs for my period, and my cute and well kempt ones for when I’m not on my period,” she wrote. “Anyways, upon seeing these, he told me that I need to throw that pair away and that it’s disgusting and unhygienic. He made quite a few comments about how gross they are despite them being CLEAN but just blood stained from a previous period/spotting situation.”

She went on to say that when she tried to explain that these are cleaned (if a little stained) pairs that exist for the express reason of getting stained (think: a T-shirt you wear for painting the house or doing yard work) he responded poorly and made her feel terrible. He also tried to claim that he was pretty sure other girls/people with periods don’t do that.

“It made me feel really… I don’t know gross? Ugly? Alienated? I’m not really sure but it definitely made me upset and feel some type of way about something I felt was natural, I guess,” OP added.

So there’s a lot to unpack here, including the “extremely hygienic” behaviors the poster describes that, to be fair, do sound a little obsessive (e.g. “he will scrub his body 3 separate times in one shower cycle just to make sure he doesn’t miss any dirt. His showers are easily an hour most days if not more.”) 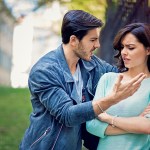 That said, the way he at 27 years old isn’t able to cope with someone having clean (if slightly stained) clothes existing in their possession for comfort, is a lot. Like, period underwear literally is sold for the express purpose of absorbing and keeping folks dry and comfortable. So that’s a good way to self-own about not having particularly trusting or intimate relationships with many people who menstruate.

And Reddit’s AITA commenters agreed, raising the alarm that her boyfriend’s behavior seemed a little extreme (though we do draw the line at diagnosing anonymous strangers over the Internet) and that she is entitled to have whatever ratty clothes she needs to feel comfortable during her period.

“Scrubbing his body 3x twice a day is not healthy—physically or mentally.Keep in mind, if he stays like this you can never have kids with this guy. Kids are disgusting, barfing, puking, crapping stain machines,” one commenter wrote. “BTW: Many women wear their period stained underwear any time they’re clean.”

And others were there to just reiterate the obvious: Stains and mess are part of being a human in a human body.

“I use cloth pads and we used cloth diapers for our babies…I imagine it would cause this poor guy’s head to explode,” as one sage commenter wrote. “Babies are messy, being a mother is messy, periods are messy. Welcome to being human.”

Before you go, check out our favorite period products (including period underwear) for optimal menstrual comfort: