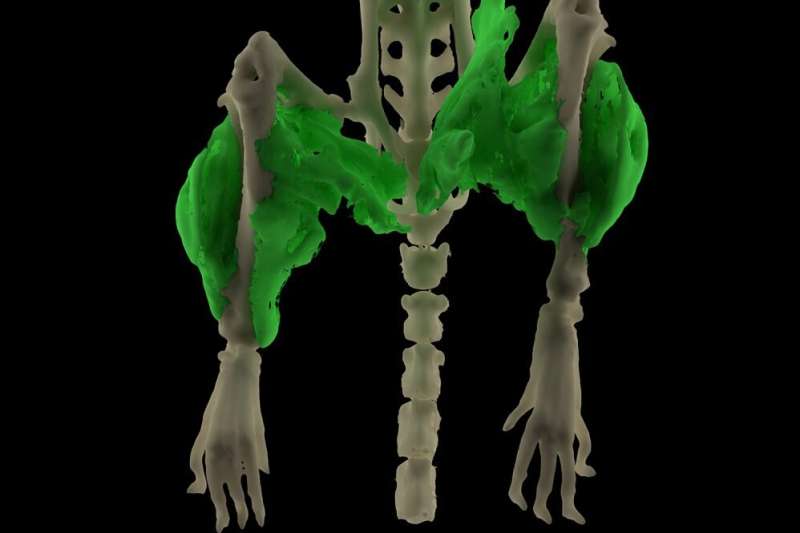 Blocking the mutant protein with an antibody didn’t stop the strange, abnormal bone growths in mice. But the knowledge gained could steer scientists toward more promising approaches, report researchers from UConn and Alexion Pharmaceuticals in the 15 June issue of the Journal of Clinical Investigation.

Fewer than 4,000 people worldwide are afflicted with fibrodysplasia ossificans progressiva (FOP), an inherited disease in which small injuries or bruises to skeletal muscle provoke the growth of massive, abnormal bone and cartilage. Gradually much of the body’s soft tissue turns to bone. Now, researchers at UConn and Alexion Pharmaceuticals who were investigating a potential cure instead found a concerning surprise—blocking the protein responsible for the disease with a monoclonal antibody made the abnormal bone growth worse in mice.

Normally, stem cells help repair muscle damaged by injury or disease. But in people with FOP, certain stem cells get the wrong message from a mutant receptor on their surface. Instead of promoting muscle regeneration, the stem cells develop into bone.

UConn Professor of Molecular and Cell Biology David Goldhamer, Alexion Pharmaceuticals researcher Jeffrey Hunter, and colleagues worked for years to discover a potential antibody therapy for FOP using accurate genetic mouse models of the disease developed by the two groups. The idea was that the antibody would block the mutant receptor and prevent the responsible stem cells from making new bone. But the results were exactly the opposite.

“The unexpected result: injecting the antibody into FOP mice caused a dramatic increase in inappropriate bone formation,” instead of protecting them as we’d hoped, Goldhamer says.

Goldhamer, Hunter and their teams worked with an antibody discovered by Alexion that interferes with the specific cell-surface receptor involved in FOP called Activin A receptor type 1, or ACVR1. The researchers thought that if they blocked ACVR1, the abnormal bone growth would stop. But instead, it was exacerbated.

Another team working on antibody-based therapies for FOP ran into the same effect. Regeneron Pharmaceuticals used different antibodies they derived independently, as well as a different strain of FOP mice, but got the same adverse result. Their paper also appears in the JCI this week.