A baby girl who was born weighing less than one pound is finally going home after spending nearly 150 days in the NICU.

Kallie Bender was born in May 2019 prematurely at just 25 weeks and weighing only 13.1 ounces – about the same as heavy as a can of soup.

After being stabilized by the life support team at Dignity Health St. Joseph’s Hospital and Medical Center in Phoenix, Arizona, she was immediately transferred to the neonatal intensive care unit.

Five months later, Kallie was discharged on Monday and currently weighs a healthy seven pounds, about as heavy as a bag of potatoes. 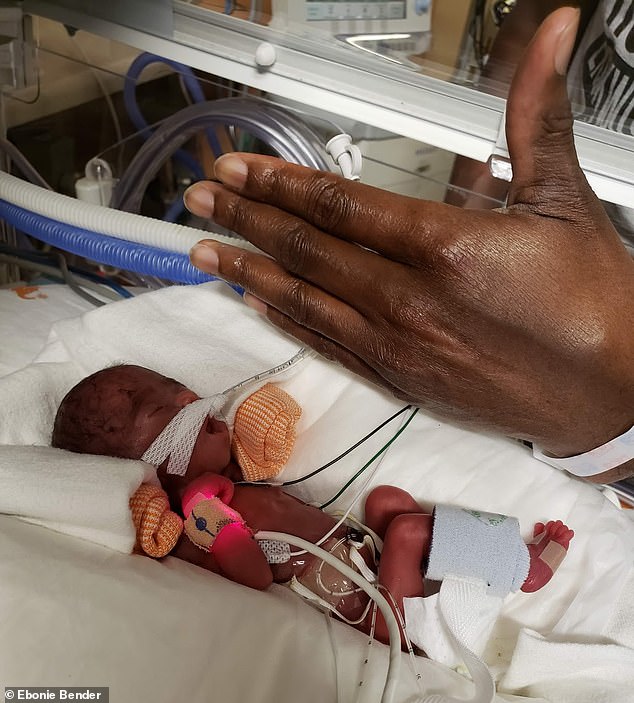 Kallie Bender, who was born at 25 weeks and spent five months in the NICU, is finally going home. Pictured: Kallie not long after she was born 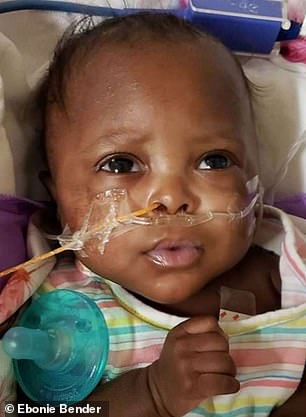 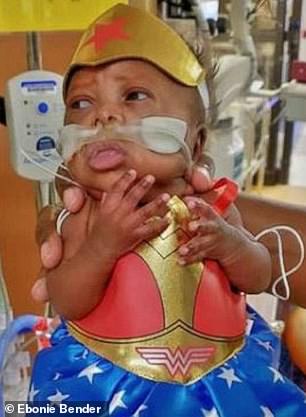 Kallie’s mother, Ebonie, from Gilbert, Arizona, was told when she was 24 weeks and four days pregnant that Kallie was not growing quickly enough. Pictured: Kallie in the present day

Kallie’s mother, Ebonie Bender, told DailyMail.com that she and her husband, Dameon, were trying for a girl after having three sons, ages 18, 15 and 12.

They were ecstatic when they found out she was pregnant, but nervous because, from the beginning, her pregnancy was classified as high-risk due to high blood pressure.

Bender was visiting her regular OBGYN every other week and a doctor specializing in high risk pregnancies in between those weeks.

During one appointment, when Bender was 24 weeks and four days pregnant, she was told Kallie wasn’t growing at a normal pace.

There was also very little fluid surrounding Kallie in her mother’s womb, due to a condition called absent end diastolic flow.

This occurs when blood flow is reduced from the placenta to the unborn baby, which prevents them from getting the nutrients they need.

Bender was admitted to the hospital and, after four days of best rest and a series of tests, doctors told her that Kallie’s best chance of survival was to be delivered prematurely, about 15 weeks early.

When Kallie was born in May, she weighed just 13.1 ounces and measured 10.5 inches long. Pictured: Kallie at two months old

‘I was really scared,’ Bender said. ‘I was scared of the unknown, what was going to happen, where her life would be after this.’

Almost one out of every 10 infants in the US is born prematurely.

A birth is premature if the baby arrives at least three weeks early – or prior to 37 weeks of pregnancy.

According to the March of Dimes, a nonprofit that works to improve the health of mothers and babies, preterm birth is the largest contributor to the infant death rate in the US.

Kallie spent the next several months on a machine called an oscillator to help her breath as she continued to grow and her lungs slowly became stronger.

She also had one operation in June to repair a hole between the two major blood vessels that carry blood from her heart to her body, a condition called patent ductus arteriosus.

Luckily, Kallie did not suffer from any brain bleeds or infections that are common in baby born as early as she was.

‘I’m grateful that, in spite of the health challenges that she did have, it could have been a lot worse,’ Bender said. 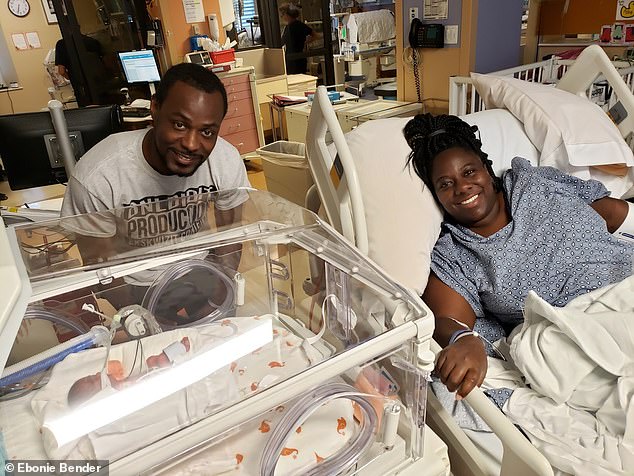 She spent five months in the NICU at a hospital at Dignity Health St Joseph’s Hospital and Medical Center in Phoenix. Pictured: Kallie after she was born with her father, Daemon (left), and her mother, Ebonie (right) 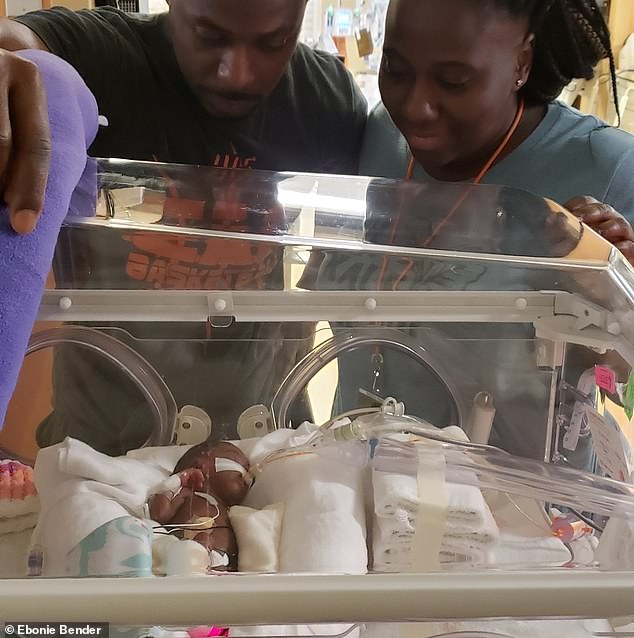 On Monday, Kallie was discharged, weighing seven pounds, about as heavy as a bag of potatoes. Pictured: Kallie being visited in the NICU not long after she was born by her mother and father

A 2015 study published in The Journal of the American Medical Association found that survival rates of preemies have increased between five and nine percent in the last three decades due to improvements in neonatal care.

But Dr Vinit Manuel, the medical director of the NICU at Dignity Health St Joseph’s Hospital and Medical Center, told DailyMail.com that that’s not the only reason.

Kallie’s mother and father drove 40 minutes from their home in Gilbert to visit her just about every single day.

‘They have been involved from day one, being at the bedside, doing skin-to-skin contact, reading to the baby, playing music,’ Dr Manuel said..

‘It’s not easy to quantify, but research has shown the more families get involved, the benefits [for the baby] are huge.’

Kallie will still need an oxygen tank and a feeding tube for a short while. Bender says it’s bittersweet to be leaving the NICU but she’s excited to bring her daughter home.

‘We’ve some such a long way and, coming here every day, I see faces every day and I’m going to miss seeing those,’ she said.

‘But it’s sweet because I don’t have to make this commute anymore.’