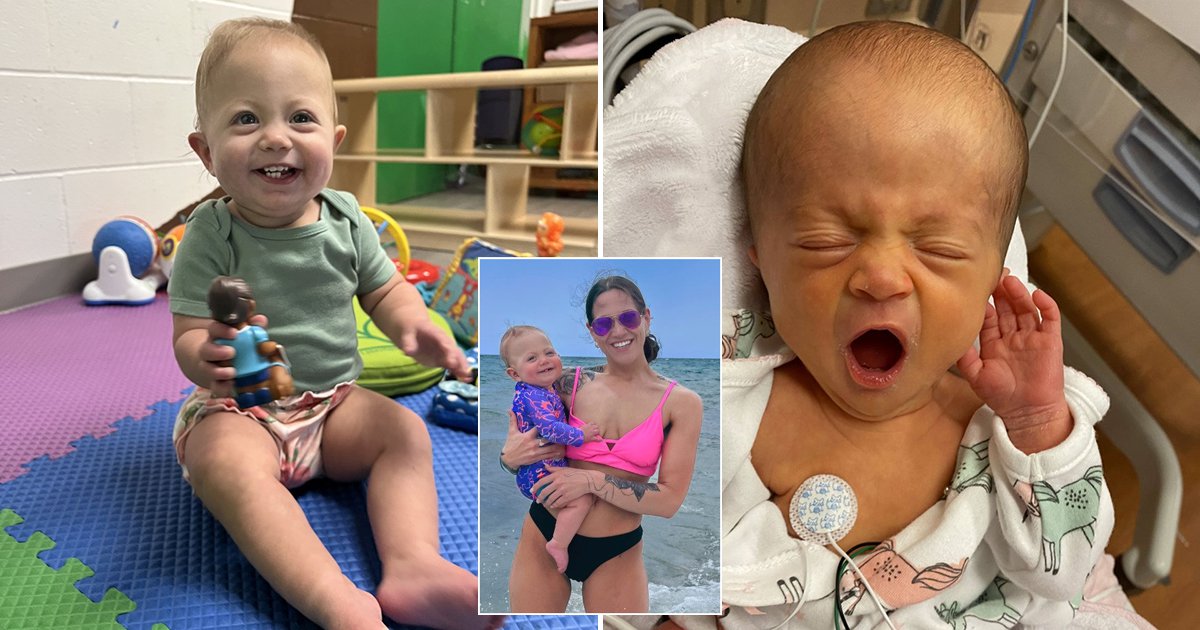 A young mum refused to follow repeated medical advice and gave birth ‘to a baby girl who defied all odds’.

Katie White, 24, had a completely normal pregnancy up until she reached 20 weeks.

She went in for a standard ultrasound check-up at Mercy Hospital, St Louis, Missouri, USA, but as soon as the scan appeared on screen it was clear something was wrong.

A specialist doctor analysed the ultrasound, and her unborn baby girl was diagnosed with hydrocephalus – a build-up of fluid on the brain.

The specialist predicted the worst and said baby Kensley would likely never be able to walk, talk or eat.

But Katie ignored advice and continued with the pregnancy, and despite having hydrocephalus, Kensley, 14 months old, is a happy little baby reaching all her milestones.

Kensely is a ‘perfect happy little girl’, she’s ‘sassy and smart’ and surprises her mum every day with new things she can do – her latest is making animal noises.

But she has faced some hurdles along the way.

Speaking of the moment she learnt about her daughter’s shock diagnosis, Katie, a nursery assistant, from St Louis, Missouri, USA, said: ‘I was distraught and bawling my eyes out.

‘They immediately tried to get me in contact with family planning to terminate the pregnancy.

‘I needed to go home and think. I couldn’t make such a huge decision off the back of one doctor’s advice and I thank my lucky stars that I did.

‘My daughter would not be here today if I had taken that advice.’

Katie’s aunt, Michelle, quickly got to work researching specialists in the area and came across Dr Michael Paul.

Three days later, Katie had an MRI scan and Dr Paul reassured Katie that everything would be OK, despite three other doctors predicting the worst.

‘Dr Paul knew where I was coming from,’ she said.

‘He has a child with special needs and knew I couldn’t just give up on my daughter.

‘From then on, I had to go to the hospital every other week to make sure that me and baby were okay.’

At 30 weeks, Katie was given the same advice to terminate the pregnancy, she said.

‘It was overwhelming,’ Katie said.

‘I was scanned again in a room full of unfamiliar faces – it was awful.’

But Dr Paul’s advice was she should give birth as soon as possible, after 37 weeks.

On Saturday 22nd May 2021 Katie was relaxing by the pool and started to bleed.

‘I rushed to Missouri Baptiste Hospital and all I could think was it was Dr Paul’s day off,’ she said.

‘I knew my baby was coming that day. I just really wanted Dr Paul there.

‘As soon as I arrived, I pleaded with them to call him.

‘I was beside myself thinking he wouldn’t be there for the birth and that I might have to go to a different hospital.

‘I lay in the bed and looked up, to my delight there he was.

‘I was overwhelmed and so grateful.’

Katie had emergency c-section at 5.30pm the same day.

Katie was only able to hold her newborn for five minutes until she was whisked away.

‘I was overjoyed seeing my baby for the first time, but it was bittersweet knowing she would have to be taken away,’ said Katie.

Kensley was doing well despite her hydrocephalus, and doctors drained the fluid in her brain, but Katie decided not to have a shunt fitted.

A shunt is a device put into the brain which controls the excess liquid.

‘I was petrified it could go wrong and wanted to explore other options first such as ECT, electroconvulsive therapy and ETV, Endoscopic Third Ventriculostomy,’ she said.

Kensley was allowed to go home after seven days, but at two weeks old she had her first surgery, to drain some of the liquid.

Later Kensley was struck with rhinovirus, and she discovered there was also fluid leaking out of her brain onto her body.

An MRI revealed the only option was to have a shunt fitted.

‘It felt like the end of the world to me, I was petrified,’ she said.

‘I was scared to see her after the surgery for the first time and I completely lost it.

‘She was wrapped up in blankets and looked so sweet, comfortable, and happy.

‘She was a completely different child and I felt so bad that she could have had the shunt fitted sooner but I just did what I thought was best at the time.’

Four months after the shunt was fitted, Kensley had an MRI scan and her brain growth had succeeded all expectations.

‘She hasn’t ever had a seizure, she eats by mouth and can see,’ she said.

‘She absolutely loves food and eats like a horse.’

Now at 14 months old, baby Kensley appears to be a healthy and happy baby.

Only time will tell if she develops further symptoms.

Some children with hydrocephalus can suffer with their mobility and can have behavioural problems.

‘She is so full of character and is my little angel I wouldn’t change her for the world,’ she said.

Katie is now expecting her second child with her boyfriend, Ty, 26, a police officer.