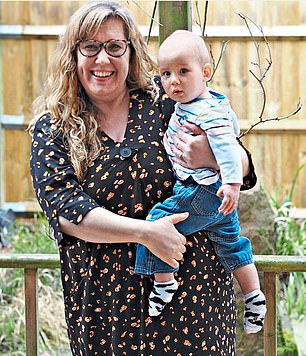 Laura Summers, 38, from Bracknell, in Berkshire was fitted with the £120 PICO dressing following the birth of her third child Bodhi, right and recovered from her caesarean more quickly than with a traditional bandages

Now the NHS spending watchdog, the National Institute for Health and Care Excellence (NICE), has issued new guidance recommending the routine use of the bandage on thousands of patients who have higher chances of complications, such as the obese, smokers and diabetics.

Surgical infections affect more than 200,000 patients a year and cost the NHS about £700 million. They delay the healing of wounds, increase the use of antibiotics, and can result in more surgery to remove infected tissue.

Traditional dressings stop bacteria getting in from the outside but have little or no effect if bugs have already penetrated wounds.

Deep wounds – like those left in the abdomen after a caesarean section – contain exudate, a mass of cells and fluid that has seeped out of blood vessels damaged during the procedure.

Exudate provides the perfect warm, moist breeding conditions that bacteria thrive on and needs to be removed regularly.

With conventional dressings, this means changing them and cleaning the wound every few days. But a radical new approach, called negative pressure wound therapy, works by first sealing the cut with an airtight dressing and attaching it to a pump to suck air out of the wound, creating a vacuum inside it.

This forces the exudate out, taking harmful bacteria with it.

Most forms of this treatment rely on the fluid being drained into a bulky canister, about the size of a small saucepan, which the patient must carry everywhere. 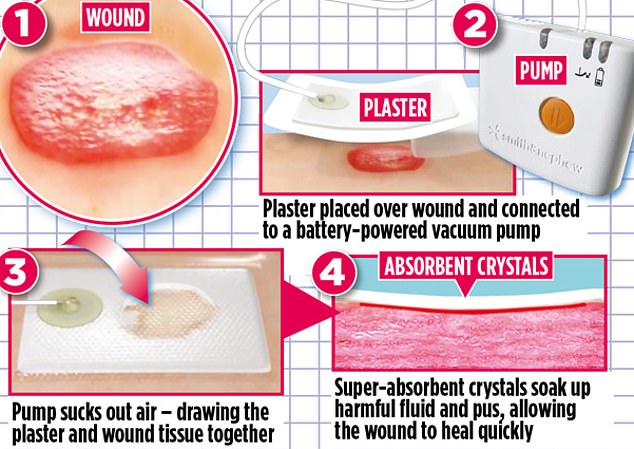 In contrast, PICO, which lasts seven days before it needs to be replaced, has no canister. Instead, super-absorbent crystals in the silicone dressing mop up the fluid and allow it to simply evaporate through the top and into the air – keeping the bandage dry. The battery-powered pump, meanwhile, is no bigger than a matchbox and can slip easily into a patient’s pocket.

John Murphy, a breast cancer surgeon at Manchester University NHS Foundation Trust, says: ‘We have used PICO on more than 500 breast reconstructions and not had a single infection.

‘It is saving money because if we had to redo a reconstruction, it would cost £15,000.’

And Darly Mathew, a consultant obstetrician and gynaecologist at the Chesterfield Royal Hospital, says PICO has slashed infection rates in caesarean patients.

‘Surgical site infections are a major problem,’ she says.

‘Patients are often overweight these days, and having more fat cells under the skin can cause more infections as bacteria are more likely to become trapped in the wound. It’s important to remove the exudate and ordinary dressings do not do that very effectively.’

An audit by Dr Mathew and colleagues of C-section patients treated with the PICO bandage found it reduced infections by 30 per cent compared to standard dressings. She says: ‘It’s so effective I now use it for hysterectomies and ovary removals as well.’

Laura Summers, 38, from Bracknell in Berkshire, made a rapid recovery with a PICO dressing after her third child, Bodhi, was delivered by caesarean section last year. The blogger and social media consultant was judged to be at risk because of previous wound infections.

‘When my second child, Aria, was born four years ago, I developed a severe wound infection that took months to clear up,’ says Laura.

‘I was taking antibiotics and having to see my GP two or three times a week to check the wound.’

After a friend mentioned the PICO dressing, Laura asked her doctors at Frimley Park Hospital in Surrey, if it could be used to aid her recovery following Bodhi’s birth. ‘The pump was so small I was able to tuck it into my underwear in hospital,’ she says. ‘And seven days later when the bandage came off, even the midwife was amazed at how well my wound had healed.

‘In fact, I didn’t need another bandage after that. It made things so much easier.’