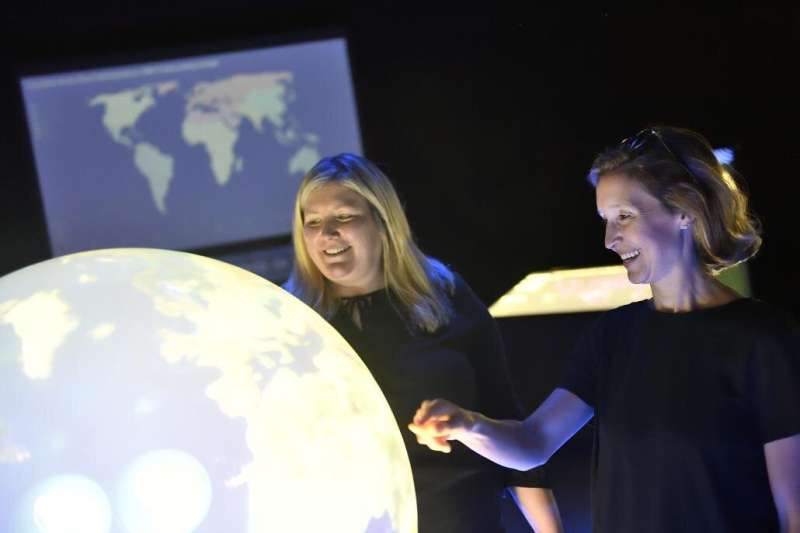 Lauren Gardner, co-creator of the global COVID-19 map, and Beth Blauer, the center’s data lead, have spent nearly the entire lifespan of SARS-CoV-2 collecting, mapping, and studying the data detailing its deadly march around the world since 2020.

Their efforts building global, national, and local maps tracking the pandemic positioned them and Johns Hopkins University atop an international public health data ecosystem, which policy makers, journalists, researchers, and citizens around the world have relied on to make decisions about quarantining, masking, testing, and more.

The pandemic has forced a reckoning with how government agencies and the scientific community collect, manage, and share critical public health data in near real time—a topic both Gardner and Blauer addressed during their appearances at the SNF Nostos Conference last month in Athens, Greece. The international gathering of health and technology experts is sponsored annually by the Stavros Niarchos Foundation, which also supports the Coronavirus Resource Center, also known as the CRC.

“We know that data was probably our smartest ally when it came to navigating the pandemic,” said Blauer, associate vice provost for Public Sector Innovation. “What we learned during the pandemic was that there was a tremendous demand for data. People were craving it.”

Demand was as strong from average citizens as it was from researchers, scientists, journalists, and government officials.

“We were all looking for the best quality data to navigate the tough decisions we were all facing,” Blauer said during her talk, “The Geography of Health Outcomes.” “We need to continuously invest in health data infrastructure.”

Otherwise, she said, “in the absence of that data we are a bit misguided.”

Blauer worked with mayors from various U.S. cities, including Baltimore, to help them prepare to help communities that were set to absorb the disproportionate impact of COVID-19—the same under-resourced, mostly minority neighborhoods where health outcomes are already worse than in wealthier areas.

Mayors at the start of the pandemic wanted to know what data to use when targeting limited resources. “The reality was they didn’t need to know where the worst outcomes were going to happen,” Blauer said. “They already knew. It was very predictable where COVID would hit hardest.”

What they needed to know was how to use data to efficiently deploy resources to the neediest communities as well as to combat misinformation that questioned effective strategies such as vaccinations, masking, and social distancing.

“The harms posed by misinformation” were another critical lesson from the pandemic, Gardner said during her “Science & Journalism” discussion at the conference. Misinformation about vaccines was especially harmful.

“There was a lot of misinformation circulating,” said Gardner, director of the Center for Systems Science and Engineering in the Whiting School of Engineering. “In the U.S. alone we had hundreds of thousands of deaths that we could have avoided if more people got vaccinated.”

Gardner’s panel explored the ability of media outlets to explain complex scientific issues and the responsibility scientists must accurately relay findings—especially those that may not be peer reviewed but that were widely circulated through preprint services popular during the pandemic when the latest information was desperately sought.

When scientists were still learning about SARS-CoV-2 in 2020 while it was wreaking fatal havoc worldwide, people followed expert advice by limiting social gathering, wearing masks, and quarantining. “People [in the U.S.] were moving around less and staying home more even before policies were in place in their communities and they were told to do so,” Gardner said. “In early 2020 this really spoke to the value of public information being communicated.”

But in 2021, even as scientists and the public learned more about COVID-19, the political polarization that had been threatening to neuter the influence of scientific experts fully took hold. Today, distrust in public health officials and the scientific community is lower than it was at the start of the pandemic, especially among members of the Republican Party, according to a recent Pew Charitable Trust poll.

“We looked at all sorts of driving factors and one that always stands out is political party affiliation,” Gardner said of her research. “This is something we just cannot avoid. It’s just clear that this polarization and the role of politics in public health decision making and policy is … such an important factor that it needs to be addressed.”

The public needs to be better informed about how science evolves as new information is gathered and studied through the most rigorous standards of peer review, she said.

“Some of [the pre-print research] was great, but some of it was just wrong and wouldn’t get through peer review,” she said. “But the media and the public often do not know the difference. And a lot of times these works were absorbed and communicated as if they were peer reviewed new science. That was hugely problematic.”

The scientific and journalistic communities need to improve how they communicate peer reviewed studies, especially during a public health emergency.