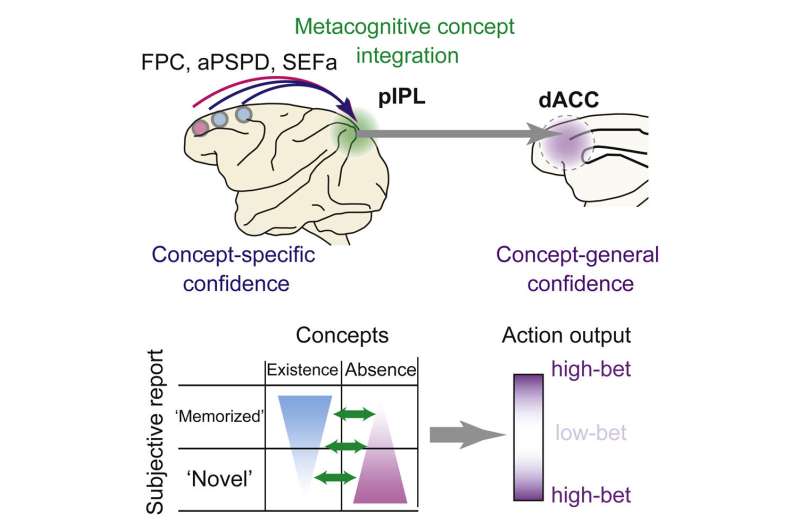 Three RIKEN neuroscientists have found a region of the brain in macaques that is responsible for integrating information from different sources during decision making. This finding, published in Cell Reports, will help inform research into psychiatric disorders that interfere with introspection.

Sometimes when making decisions, we have to draw on both our memories and the current facts in front of us. One example is attempting to decipher a hastily scribbled note while simultaneously trying to recall what we were writing about. To arrive at a decision, our brains assign levels of confidence to the two sources of information and then combine them.

Known as metacognition, this ability to self-evaluate thoughts and memories underpins many behaviors. But it hasn’t been clear where the brain integrates this information when making decisions.

Now, by conducting experiments on macaque monkeys, Kentaro Miyamoto, Rieko Setsuie and Yasushi Miyashita, all at the RIKEN Center for Brain Science, have shown that a brain region known as the posterior inferior parietal lobe (pIPL) performs this integration.

Monkeys were shown an image, and had to decide whether they had seen it before or not. To assess their confidence in their decision, the monkeys then had to bet on it by selecting between high-risk/high-reward or low-risk/low-reward options.

Functional magnetic resonance imaging during these experiments revealed that the pIPL was active while the monkeys were weighing their betting options based on the memory test.

Miyamoto was surprised by this. “The prefrontal cortex is thought to be the key region for overseeing behavior and making decisions based on rules; some believe it’s where ‘the intelligence of the soul’ resides,” he explains. “So I was very surprised that the whole-brain mapping indicated that a region at the back of the brain was active during metacognition.”

The pIPL then sent a signal to another region, the dorsal anterior cingulate cortex, to implement the betting decision.