British woman, 25, is left with Star Trek–style scarring on her forehead after falling asleep in 70F sun in Bulgaria

A woman who fell asleep in the sun for half an hour was left horrified when her burnt forehead left her with Klingon-style blistering.

Sirin Murad, 25, was on holiday in Sunny Beach, Bulgaria, in June when she fell asleep in the 21C (70F) heat with no sun cream on.

The beautician from London woke up from her nap by the pool with a slightly sore, red face, but didn’t think much of it and continued relaxing during her time off.

But the following day the skin on her forehead had turned so bubbly it resembled the famous Star Trek species.

Her skin was so tight that when she furrowed her eyebrows it looked like it was made out of plastic.

After discussing the burn with her family, she decided to not to go to the doctor because she didn’t think it would get any worse.

But as the days went on, Ms Murad’s entire face began peeling, leaving her covered in different patches of tanned and pink skin.

She has now fully recovered but has warned Brits to always use sunscreen when enjoying the warm weather.

The NHS warns everyone to use at least factor 30 protection. Suffering just five blistering sunburns in adulthood may double the risk of skin cancer, studies have shown. 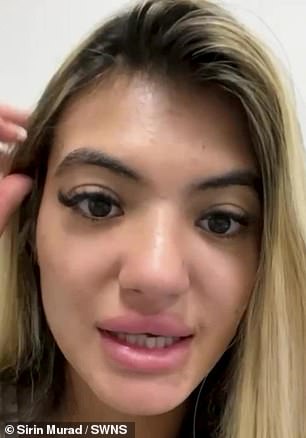 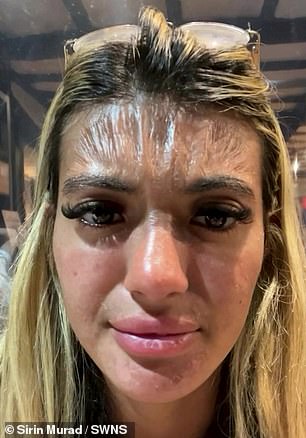 Sirin Murad, 25, from London, fell asleep in the sun for half an hour in Sunny Beach, Bulgaria. She was left with severe sunburn that left her looking like a Klingon 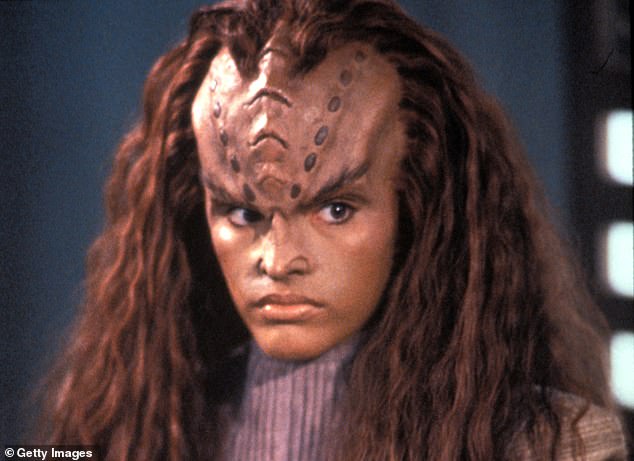 Her skin was so tight that when she furrowed her eyebrows it looked like it was made out of plastic, with deep ridges in the middle like the famous Star Trek characters (pictured) 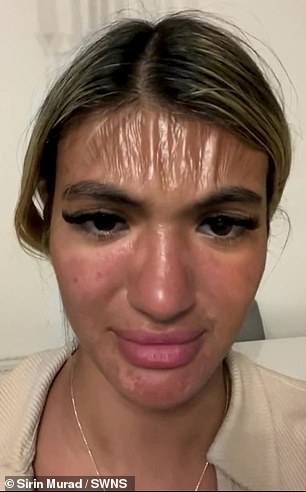 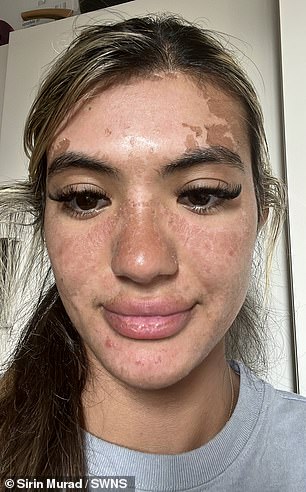 It can happen abroad or in the UK.

Ms Murad said: ‘At first it really didn’t feel like anything, it just felt a bit sore when I put pressure on it.

‘It really hurt the next day but I actually got some relief when it started peeling. It didn’t hurt and I felt much better.

‘Weirdly, my skin is great now. It even feels better than before, almost like it’s renewed.’

Ms Murad is now keen to raise awareness of the importance of wearing sun cream.

She said: ‘No matter how much you think your that you’ll be fine or that your skin will not burn, always apply sunscreen. It’s definitely worth it.

‘In my case, I genuinely forgot. I usually would do, but it just slipped my mind.’

It has now been seven week since the burn and her skin has cleared with only a few patches of discolouration on her cheeks.

But her case could have been worse, with severe sunburns significantly increasing the risk of melanoma — a skin cancer that kills 2,300 people in Britain every year.

Suffering just one blistering sunburn in childhood or adolescence can up to double a person’s chance of developing the disease, research suggests.

People are advised to wear sun cream with SPF 15 or higher.

SPF is a measure of how much a product protects against harmful ultraviolet B (UVB) rays, which play the biggest role in causing skin cancers.

UVB is a type of UV light associated with skin burning.

The SPF number on sun cream tells you how long the sun’s radiation would take to burn your skin when using the product, compared to the time without sun cream.

If it takes 300 seconds for skin to burn with sunscreen, and 10 seconds to burn without it, then you divide the bigger number by the smaller one. In this case, it would be an SPF of 30.

This means sun creams with a lower SPF will need to be reapplied more frequently.