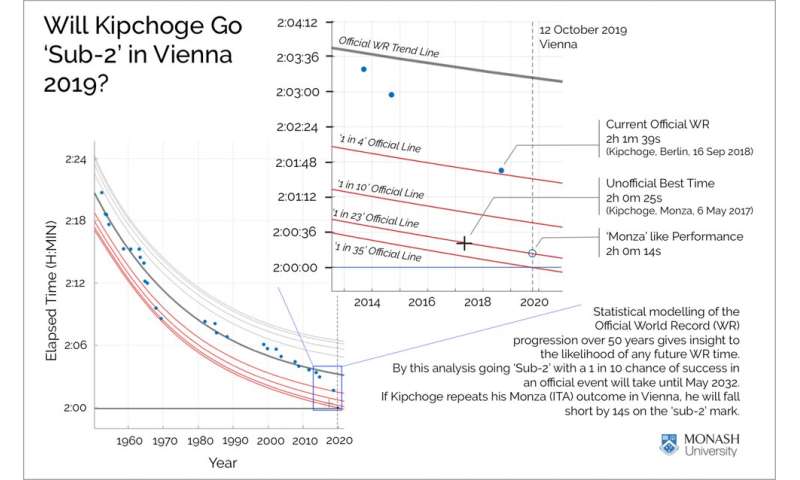 Could this be the question we are all asking ourselves in 50 years’ time as we remember the moment a male runner finally broke the 2-hour marathon barrier—the “four-minute mile” of our time?

This weekend marks the beginning of a week-long window of opportunity for the greatest marathon runner of all time, Eliud Kipchoge of Kenya, to break the fabled barrier.

Kipchoge will run an exacting 9.6km, pinball-straight course along Vienna’s Prater Hauptallee, 4.4 times, with only the clock for competition.

This isn’t an official marathon race—far from it. Kipchoge is running as part of the dedicated, privately funded 1:59 Challenge sponsored by UK chemicals firm Ineos.

So will he do it?

Probably. But let me explain.

Earlier this year, I ran the ruler over more than 50 years of world record marathon times for men and women, applying statistical tools to answer this very question for official marathon attempts.

My research, published in Medicine and Science of Sports and Exercise, found that, with 10% chance of breaking the 2-hour barrier on a given day, we would have to wait until May 2032 for the glorious moment.

However, my analysis was confined to official International Association of Athletics Federations (IAAF) times. Here, runners must compete in a sanctioned IAAF competition in which the course, the competitors, the timing, and myriad other factors must all fall within strict rules.

Kipchoge’s attempt this weekend is thoroughly unofficial, and he knows it. Indeed, Kipchoge has form at this kind of singular attempt, having previously attempted breaking the sub-2 barrier with a different major sponsor back in May 2017 at the Monza Formula 1 circuit in Italy.

There, as in Vienna, he ran with dozens of dedicated pacers, whose deliberate efforts to shield Kipchoge from wind resistance rendered the attempt unofficial.

Neverthless, even the closed track, slick tarmac, high-tech shoes, and army of pacers couldn’t give Kipchoge the performance gain he needed. He fell agonisingly short, just 25 seconds outside the 2-hour mark.

Despite the unofficial nature of the attempt this weekend, the official analysis proves very helpful at answering our question.

The graph on the left below shows the progression of the official men’s marathon world record over more than 50 years.

The progression does not follow a straight line; rather, it is steep in the early years, and shallow towards the present. This means the faster elite marathoners get, the longer we have to wait for them to improve that little bit more.

Using statistical tools, I also fit prediction curves (in red) to the progression. These curves tell us the likelihood that a given time will be run, taking into account both the average performance improvement over time, and the inherent randomness of other factors.

Zooming in on recent years (the graph on the right), we can see that Kipchoge’s current official world record of 2h 1m 39s, set in Berlin on September 16, 2018, sits on the “1 in 4” line. This means we would have expected to see a time like this, on that day in history, with around a 1 in 4 chance.

In other words, without taking anything away from Kipchoge’s amazing effort, his Berlin world record was not a huge deviation from the expected historical progression.

His Monza run in May 2017, on the other hand, was entirely different.

If Kipchoge’s time of 2h 0m 25s had been run in an official event, it would have been expected with just a 1 in 23 chance, or around 4%. This gives a strong clue to the huge performance gains available in these privately sponsored “moonshot” attempts.

So, will he do it in Vienna?

With this analysis in hand, we can have a good go at working out the chances for this weekend’s Vienna moment.

Suppose Kipchoge and his team produce an equivalent performance to Monza in 2017. Given the official progression, we would expect a marginal improvement in the time.

Simply by waiting around 2.5 years, Kipchoge effectively gains 11s “for free”. Of course, it’s not actually free—it comes at the usual cost of intensive research, hard-fought training adaptations, equipment upgrades, and so on. But theoretically, we naturally expect these improvements to happen in time as long as everyone involved in the sport is doing their job and pursuing their goals.

So where will the extraordinary come from?

First, the team of elite pacers seem to have significantly refined their approach. Video footage of a training session a month ago showed groups of pacers running in exact arrow-like positions, with precisely rehearsed transitions.

Second, all this exquisite coordination will only be possible on the day because of a custom-built electric pacing car driving ahead of the runners, beaming precision laser patterns onto the road to define the exact location of each pacer. The car apparently provides pacing accuracy to within 1 metre over the marathon distance.

Of course, this being an attempt funded by Britain’s wealthiest individual, an identical car will follow in the wings should anything happen to the first.

Third, and perhaps crucially, whereas Kipchoge ran his Monza attempt at a near-deserted motor racing circuit, the Vienna course will host a crowd hoping to witness history.

Kipchoge clearly thrives on crowd energy. He has invited the world to come to Vienna or watch online—in effect, to help shoulder the mental burden of expectation. This time he will not run alone.

Taken together, are all these extraordinary factors enough to push Kipchoge into uncharted territory?

By Monday we’ll know. But I’m willing to say that he’ll probably do it.

Related posts:
Tags: 15, a, All, Can, comes, down, Eliud, extraordinary, It, Kipchoge, marathon, run, seconds, sub-two-hour, to
Medications
Health Problems