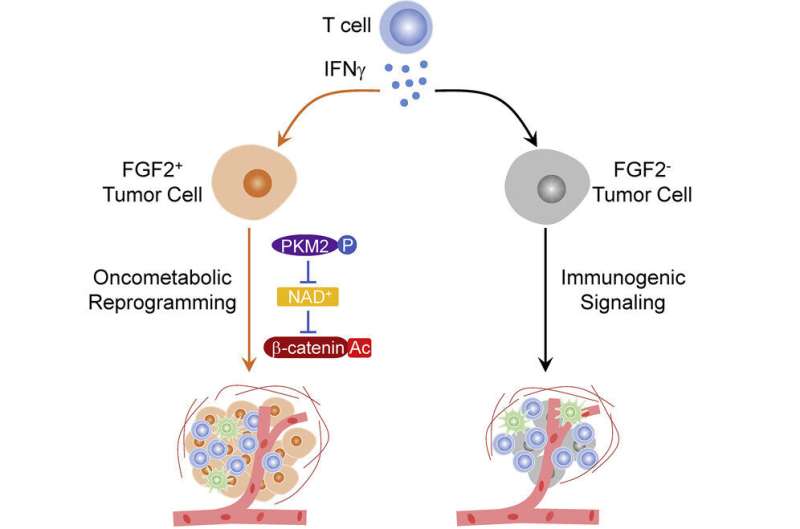 Researchers from the University of Michigan Rogel Cancer Center have found a mechanism for why a subset of patients’ tumors grow, rather than shrink, when faced with immunotherapy.

Immunotherapy has been a major advancement in cancer therapy, but it is not effective for all patients. In some instances, it can even cause tumors to “hyperprogress.”

Rogel researchers Weiping Zou, M.D., Ph.D., and Michael D. Green M.D., Ph.D., used tumor samples from patients as well as mouse models to investigate the molecular pathways involved when immunotherapy worsens, instead of slows, the progress of disease. The study was published in Cancer Cell.

The researchers expected patients with hyperprogression disease to have fewer immune cells, like CD8+T cells and the interferon γ gene signature. “But the patients who weren’t deriving any benefit from immunotherapy had a similar CD8+T cell infiltration as those patients who benefited tremendously,” said Green, assistant professor of radiation oncology and co-lead author of the study.

The team hypothesized that the patients’ hyperprogression disease was a consequence of the immunotherapy itself but needed to further investigate this controversial observation in experimental mouse models.

“We really wanted to understand if there are biomarkers that can predict, before the patient receives immunotherapy, if they will develop hyperprogression disease from the treatment,” said Zou, director of the Center of Excellence for Cancer Immunology and Immunotherapy and co-lead author of the study. The answer lay in the intersection of immunogenic, metabolic and oncogenic pathways. The team found that targeting the gene signaling axis of interferon γ, FGF2, and beta-catenin prevents hyperprogression in preclinical models.

“These findings are provocative,” said Zou. “We usually think that immunotherapy is beneficial, but now we have evidence that for a subset of patients, it’s not only not beneficial but potentially harmful for patients. If we can get to the stage of being able to identify those patients who shouldn’t receive treatment beforehand, that will be very important.”

The research was highly collaborative and involved partners from across Rogel, including Arul Chinnaiyan, M.D., Ph.D., S.P. Hicks Endowed Professor of Pathology and director of the Michigan Center for Translational Pathology, who gave input from a molecular pathology and cancer genomics perspective.

“This is an impressive study beginning in the clinic, with hypotheses generated from cancer patients treated with immunotherapy, and goes to the bench by mechanistically investigating these hypotheses in pre-clinical models. This is a stellar example of how basic research can teach us about how cancer patients have varied responses to immunotherapy,” said Chinnaiyan.

More research needs to be done in the clinic on targeting this gene signaling axis in patients.