You get used to the stares. And the cheers. And people filming on their phones. A hundred runners in gym gear tearing down the night-time city streets to a thumping pop soundtrack? It was always going to attract some attention.

This is Sydney's Midnight Runners, a fitness fad that originated in London and has spread to Berlin, Paris, Hong Kong, New York and now all the way to the Antipodes. Some call it a cult, which seems unfair, although there's no doubt this is more than just a casual running club. 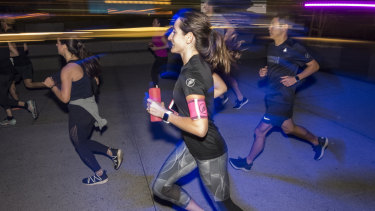 Sydney’s Midnight Runners whirl around the CBD and harbour every Wednesday evening to a pop soundtrack.Credit:Wolter Peeters

"We're definitely not a cult," says Matt Henshaw, 29, a team captain who has been involved since Midnight Runners started here earlier this year. "Bare bones, it's people who like exercise and being social."

That was always going to be a hit in Sydney, where running is a quasi-religion – although Henshaw says the popularity of morning exercise here means not everyone wants to hit the footpaths after dark.

The group meets every Wednesday outside the Royal George pub in the CBD at 6.30pm for what is usually a 10 kilometre run interspersed with workouts. Tonight's contingent is extra large, with nearly 100 starters, on account of some alleged "influencers" to help spread the word ahead of Midnight Runners' official launch next month.

The course is also shorter than usual, heading from Circular Quay under the Bridge, along Hickson Road, around Barangaroo and back to Wynyard. The pace is moderate but the three workout stops make a serviceable level of fitness desirable, as this reporter discovered after a particularly bruising routine of group squats (holding hands in a chain). 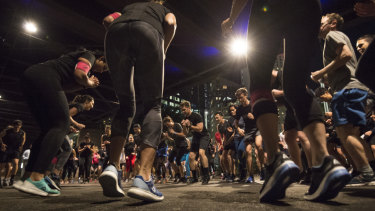 The 10-kilometre run starts with a warm-up and is interspersed with workout sessions led by team captains.Credit:Wolter Peeters

Henshaw and the other captains run with eight-kilogram boomboxes strapped to their backs, blasting a dance-pop soundtrack into the quiet night. Other pedestrians tend to gawk, film or cheer as the parade passes by; occasionally a flustered businessman or tourist gets caught in the throng.

There's a certain smug satisfaction jogging past punters stuffing their gills at Barangaroo's waterfront eateries. An unlucky police car has to wait at two separate pedestrian crossings for the entire group to run past. On return to the Royal George, the first finishers form a tunnel to welcome the stragglers with an endless series of high-fives.

Leroy Vaguez, 26, says he joined Midnight Runners for the atmosphere and to meet people. "I don't live near the city so it's easier for me to go [running] after work," he says. "I've made a lot of new friends here and everyone's been consistent in coming."

In Sydney the club is run by volunteers with some support from sponsor Reebok. So far they have avoided a run-in with city authorities, but organisers know that as the crew expands, so grows the potential for logistical issues.

After a cool-down session on the tram tracks, the runners flock inside the pub for snacks and a drink. Several regulars, including Henshaw, are preparing for Sunday's marathon or half-marathon in the Blackmores Sydney Running Festival.

First-timers Ingrid Shi and Elizabeth Blake, both 32-year-old architects, were roped into the group by a colleague. They enjoyed their debut on Wednesday and want to come back, but aren't sure they're ready to run the full 10 kilometre course.

"We have an in-joke about [training studio] F45 being a cult," says Blake. "And I said: this is only slightly more cultish than F45. But in a fun way."