E-cigs ARE dangerous: Vaping raises risks of stroke, heart disease and attacks by up to 70%, study finds

Vaping e-cigarettes raises the risks of having a heart attack, stroke, or heart disease, a new study finds.

About one in 20 US adults use e-cigarettes and many of them claim to do so because they are ‘healthier’ than combustible cigarettes.

But the devices are still relatively new and poorly understood.

As more and more research on them comes out, it becomes increasingly clear that ‘safer’ doesn’t mean safe.

The latest study, conducted by the American Heart Association, found that heart attacks are nearly 60 percent more common among vapers, who are at a 71 percent higher risk of stroke. 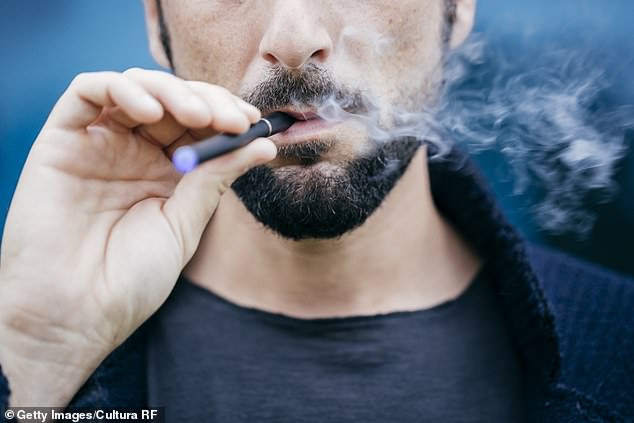 When e-cigarettes started appearing on the shelves of smoke shops and convenience stores, they were often advertised as a cessation aid for smokers.

But now, it’s become clear they are more likely to be an addition to, rather than substitute for, combustible cigarettes.

The American Heart Association (AHA) study found that people who vape are twice as likely to also smoke traditional cigarettes as are those who don’t vape.

In all likelihood, the high rates of dual usage contribute to a number of poorer health effects seen in e-cig users.

Smoking is the number one cause of lung cancer because inhaling smoke from burned plant matter is highly carcinogenic, so vapor from e-liquids so far seems somewhat safer for the longs.

But a growing body of research suggests that e-cigarettes are just as bad for the heart and cardiovascular system as traditional cigarettes.

Last year, the American Heart Association found that both combustible and e-cigarettes corrupt the lining of the blood vessels, preventing them from dilating and inhibiting the flow of blood.

This narrowing of blood’s passageways makes the heart have to work harder and damages it over time.

The same group was at a 59 percent higher risk of having a heart attack or angina.

And they were at 40 percent greater risk of developing heart disease.

Although the rate of stroke among e-cig users was notable – 4.2 percent had suffered one – the researchers could not conclude that vaping kills.

Worryingly, rates of e-cig use are highest among the young people. Just 4.2 percent of adults vape, as compared to 11.3 percent of high school students.

That may mean that that generation will face more heart disease, stroke and heart attack than those that came before them.

‘It’s obviously quite concerning,’ said Dr Larry Goldstein, chairman of the department of neurology and co-director of the Kentucky Neuroscience Institute.

‘This is a potential chip of the spear, of a wave of cardio-vascular disease, that may be coming in the future, especially since this has been so attractive to young users.’

He advised the public health officials must continue to push for a ban on sweet flavored e-liquids that are so enticing to younger users.

‘This is the first real data that we’re seeing associating e-cigarette use with hard cardiovascular events,’ he added.

‘But it’s quite a concern, especially since nationwide now we’ve seen a leveling off in, and in many instances an increase in the risk of stroke-related mortality in the country. It’s hard to know what contribution this has to that, but it doesn’t appear to be safer, or safe right now from the data that’s available.’