Chocolate lovers have new reason to celebrate as scientists have discovered the indulgent treat is good for us.

Eating just a few squares of dark chocolate every day lowers blood pressure in just one month, a study suggests.

While milk chocolate has its benefits, 90 per cent cocoa was found to have the strongest effect.

Researchers in Portugal believe this is due to dark chocolate being richer in the powerful antioxidant flavanols. 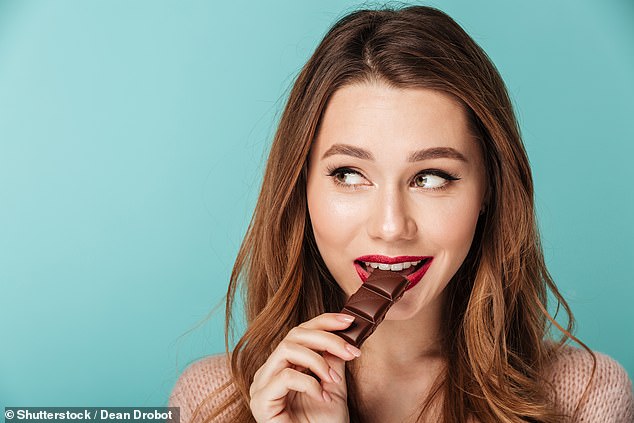 The research was carried out by the Polytechnic Institute of Coimbra, and led by Dr Telmo Pereira.

The benefits of chocolate have been extensively studied, particularly when it comes to our heart health.

Flavanols have been linked to everything from reduced insulin resistance to weight regulation and even faster wound healing.

There is therefore a huge amount of scientific interest in how eating flavanol-rich foods many influence our wellbeing.

To determine how chocolate affects our heart, the researchers had 30 healthy adults – aged 18-to-27 – eat 20g of the sweet treat every day for 30 days.

Half of the participants had 55 per cent cocoa chocolate, while the remainder had  90 per cent.

The participants’ heart rates, artery stiffness and pulses were measured 30 days before the experiment and two days after it finished.

They were told not to eat other flavanol-rich foods, such as berries, tea and wine, to avoid clouding the findings.

Results – published in the journal Nutrition – revealed all the participants saw significant improvement to their blood pressure but the effects were more dramatic in the high-cocoa group.

Blood pressure is measured as millimetres of mercury (mmHg) and is given as two figures.

The popular milkshake allows athletes to intensely exercise for around six minutes longer than sports drink without tiring, a study found.

‘The take-home message is chocolate milk is a low-cost, delicious and palatable option for recovery and provides either similar or superior effects compared with commercial drinks.’

A normal systolic reading is between 90 and 120 mmHg, and diastolic between 60 and 80 mmHg, according to the NHS.

Those eating the high-cocoa chocolate saw their systolic blood pressure go down by 3.5 mmHg, compared to 2.4 mmHg in the lower-cocoa group.

And diastolic blood pressure was reduced by 2.3 mmHg and 1.7 mmHg, respectively.

Ventricular-arterial coupling describes the interaction between the left ventricle and the arteries, which together pump blood around the body.

This improved interaction is thought to occur due to reduced pressure in the arteries, as well as ‘vascular relaxation’.

The researchers note, however, there was no change to the structure of the participants’ hearts. This may be due to the study only lasting 30 days.

The inclusion of only healthy, young people also meant the ‘improvement with the cocoa ingestion was necessarily limited’.

A strength of the study is that it is one of the first to be carried out in young people, the researchers add.

The scientists therefore hope their findings will support chocolate consumption as a preventative measure for heart health.

Future studies should look at how chocolate interacts with the rest of our diet to influence our wellbeing, they claim.

They should also uncover exactly how cocoa benefits our heart and the optimal amount to eat.