Has this doctor found the cure for sepsis? Emergency care physician says vitamin C can prevent patients from going into organ failure 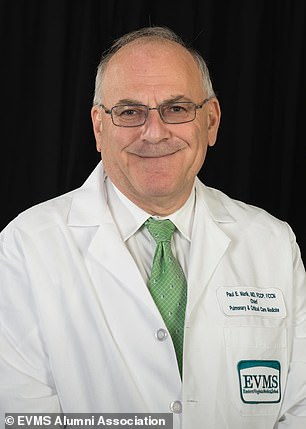 Dr Paul Marik, chief of pulmonary and critical care at Eastern Virginia Medical School, says infusions of vitamin C and steroids could be a cure for sepsis

A critical-care physician in Virginia believes he may have found a cure for sepsis.

He says it’s faster, cheaper and better than the current care of antibiotics and IV fluids.

But several doctors are skeptical and say that no randomized clinical trials have been performed – and that Dr Marik’s claims might lead patients to erroneously believe that even the vitamin C supplements in their medical cabinet could save them from death.

Sepsis is a life-threatening condition in which chemicals that the immune system releases into the bloodstream to fight an infection cause inflammation throughout the entire body instead.

Many doctors view sepsis in three stages progressing from sepsis to severe sepsis and finally septic shock, which can result in death.

According to the Centers of Disease Control and Prevention (CDC), around 1.7 million Americans develop sepsis every year, killing at least 270,000.

In fact, one in three people who die in a US hospital have sepsis.

Dr Marik told DailyMail.com he came across his concoction ‘purely by chance and the planets being aligned’ while he was treating a patient for sepsis in January 2016.

At the time, 53-year-old Valerie Hobbs was in the intensive care unit at Sentara Norfolk General Hospital after she contracted the infection.

‘Any prudent physician would think: “What else can I try that will be different, noble and unique?”,’ Dr Marik said.

He said he knew that patients in the throes of sepsis have low to undetectable levels of vitamin C, a nutrient the body needs to form bone collagen, cartilage, muscle and blood vessels.

About three weeks earlier, he said he had been reading research papers that showed patients, when given the vitamin via an IV, did not suffer organ damage or failure.

Hobbs was on a breathing tube and in kidney and renal failure, when Dr Marik decided to try the IV infusion.

‘She was dying and I thought: “Gee whiz, I’ve got nothing to lose”,’ he said.

But Dr Marik added the steroid hydrocortisone to reduce inflammation and the vitamin thiamine which helps with absorption.

The next day, not only was Hobbs still alive but her kidney function had increased and she was taken off a ventilator. She went home to Norfolk three days later.

Dr Malik, unsure if it was a fluke, said he and his team decided they would try it again if any more patients arrived in septic shock.

Sepsis, known as the ‘silent killer’, strikes when an infection such as blood poisoning sparks a violent immune response in which the body attacks its own organs.

Around 1.7 million Americans develop sepsis every year, killing at least 270,000.

If caught early, the infection can be controlled by antibiotics before the body goes into overdrive – ultimately leading to death within a matter of minutes.

But the early symptoms of sepsis can be easily confused with more mild conditions, meaning it can be difficult to diagnose.

Sepsis has similar symptoms to flu, gastroenteritis and a chest infection.

Symptoms in children are:

Shortly after, two more patient arrived with sepsis. Both improved after they were given the same infusion.

‘At that point I realized: “Hey I think we’re onto something”,’ said Dr Marik.

He said when he first told the nurses at the hospital, they thought he was ‘insane’ but – after they saw patients’ conditions improve – they decided to track their results.

In June 2017, a small-scale observational study was published in the journal Chest comparing the outcomes of patients with sepsis at Norfolk General’s ICU with the previous year.

The authors (including Dr Marik) said that in 2015, 19 of 47 septic patients died, a mortality rate of about 40 percent.

But in 2016, just four of 47 septic patients died, all from underlying diseases rather than sepsis, a mortality rate of just eight percent.

Dr Marik said he’s treated 900 patients with sepsis since he started in 2016, with just two to three percent dying.

‘I thought we had an obligation to publish [the study] with the idea that this would be a stepping stone,’ he said.

‘We said it was a preliminary, observational study, and never claimed it was anything else.’

He adds the treatment, which costs just $40, is cheap, reduces a patient’s stay at the hospital and responds better than the current standard of care.

However it is not without its critics.

‘It is research, but it is a very small study,’ Dr Jim O’Brien, an intensive care unit physician and board member of Sepsis Alliance told Health News Review.

‘It’s an observational study, not a blinded and randomized clinical trial. So we need more rigorous, larger, and well-designed studies to see if the results hold up.’

Dr Robert Califf, former commissioner of the US Food and Drug Administration, wants to see a clinical trial with patients either assigned Dr Marik’s treatment or the current standard run at multiple hospitals.

‘Nothing has worked despite all the great ideas people have had, often ballyhooed with observational data like this, claiming that it’s a big effect,’ he told NPR.

‘It would take a very small study, done by people independent of him, to prove it. And then the whole world would benefit.’

Dr Marik says there are currently at least 15 randomized controlled trials being done around the world. He suspects some early data may be available by June of this year.

He says he knows it will take time before his method is potentially adopted – and he is far from the only doctor whose cures have been criticized.

Dr Marik often tells the story of Ignaz Semmelweis, who noticed while he was director of the maternity clinic at the Vienna General Hospital in Austria in the 1840s that women were dying after childbirth at high rates.

The hospital had two wards, one run by doctors and one run by midwives. He realized doctors were doing autopsies and not washing their hands before they delivered babies.

The midwives, who didn’t perform autopsies, had much lower mortality rates.

Semmelweiss told his staff to wash their hands and tools in a chlorine solution. Despite infection rates dropping dramatically, doctors were angry at the implication that they were causing the patients’ deaths.

He was eventually fired and, at age 47, he was committed to an insane asylum when he started to show signs of possibly early onset Alzheimer’s disease.

Semmelweiss died two weeks later after he was beaten by guards and a wound developed an infection – likely sepsis.

‘He was the pioneer of something we take for granted, the importance of hand-washing in a hospital and people didn’t believe him,’ Dr Marik said.

‘That was the analogy. It reflects how close-minded people can be and don’t want to think outside of the box.’