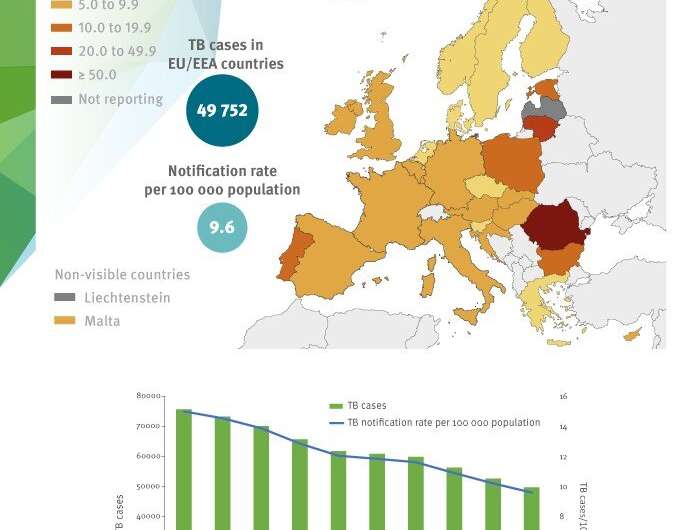 The tuberculosis (TB) burden in the WHO European Region as a whole is decreasing, and is down 19% overall for 2015-2019, according to the latest WHO/European Center for Disease Prevention and Control (ECDC) report Tuberculosis surveillance and monitoring in Europe 2021 (2019 data).

Regional TB mortality has gone down, declining by 9.4% between 2018 and 2019. This is notably higher than the average global decline in TB mortality (3.7%) and enough to have reached the End TB Strategy milestone of a 35% reduction by 2020 compared to 2015.

However, TB is second only to COVID-19 as an infectious disease that kills, and drug resistance is a major concern. There are also worrying indications that the COVID-19 pandemic may stall progress or cause significant setbacks in the fight against TB.

The uneven burden of TB

Twenty-nine countries in the EU/EEA reported a total of 47 504 TB cases, which equates to a rate of 9.2 cases per 100,000. Across the EU/EEA, most country-specific rates continue to decline; however, the EU/EEA as a whole is currently not on track to reach the goal of ending TB by 2030.

TB is far from being evenly distributed in the European Region. Around 83% of estimated cases occur in 18 countries, where incidence is five times higher than the EU/EEA average. Five of the 18 high priority countries are within the EU/EEA, and 13 are in eastern Europe and central Asia.

The decrease in TB burden put the Region on course to reach the End TB Strategy milestone for 2020 and the regional action plan target for reduction of the TB incidence rate. However, there are grave concerns that the COVID-19 pandemic may jeopardize recent progress.

Negative impacts have already been observed in TB service delivery and notifications in high-burden countries, this is believed to indicate that fewer people have been tested, meaning that people with undiagnosed TB are not getting the treatment they need and run the risk of infecting others.

The findings of an ongoing assessment of the impact of COVID-19 on TB services and spread in the European Region, will be ready in Spring 2021.

Despite universal access to quality-assured anti-TB drugs, treatment outcomes in the region remain sub-optimal. Only 77% of patients successfully completed treatment in 2019, well below the global rate of 85%. Treatment success in the EU/EEA was lower still, with only 64% of all TB cases notified in 2018 being reported as having completed their treatment successfully.

Strains of TB that do not respond to commonly used treatment regimens are known as either multidrug-resistant tuberculosis (MDR-TB) or extensively drug-resistant tuberculosis (XDR-TB). Just 59% of MDR-TB cases notified in the region in 2017 were successfully treated, far short of the 75% target. As for XDR-TB cases in 2016, treatment success was only 43%.

Across the region, treatment outcomes for MDR-TB remain suboptimal. Unsuccessful treatment is one of the factors that drives resistance, often due to lack of effective TB medicines in treatment regimens for drug-resistant TB, and low adherence to therapy.

TB at center of health agendas

Stella Kyriakides, European Commissioner for Health and Food Safety stated: “The decline of tuberculosis in recent years is positive news. But TB continues to be a threat to some regions in the EU and continues to affect the most vulnerable in our society. We know that there is still more work to do. Together with our agencies, the Commission is committed to playing its part to eliminate TB through, in part, funding, research and the fight against antimicrobial resistance. Prevention, early diagnosis and access to treatment and care will also play key roles in this regard.”

ECDC Director Dr. Andrea Ammon commented: “In the EU/EEA, the overall TB notification rate continued to fall in 2019, highlighting some progress towards the United Nations Sustainable Development Goals (SDGs). However, despite this progress, the EU/EEA is not currently on track to reach the goal of ending the TB epidemic by 2030. Further to this, across all cohorts, treatment success in the EU/EEA remains well below the WHO targets. The wide-scale disruption to TB services due to the COVID-19 pandemic will make it even more difficult for Member States to reach the SDGs and treatment targets, but now is the time for countries to accelerate their progress towards eliminating TB.”