England rugby stars lead heart-warming campaign to raise £500,000 for a drug that could save a 10-year-old boy’s life by stopping his cancer coming back for the THIRD time

A group of England rugby stars have teamed up to help try and raise half a million pounds for a boy at risk of his deadly cancer returning.

Harry Banks, 10, has had rare neuroblastoma twice since 2012 and his doctors have warned it will be incurable if it comes back again – which is likely.

Harry’s family have found a drug in the US which could save their son’s life but it will cost them £500,000, money they are desperately trying to raise online.

Hearing about the sports-mad schoolboy’s plight, big-name English rugby players have put their names to the campaign to raise money for Harry.

Danny Cipriani, Marcus Smith, Harry Mallinder and Dylan Hartley all featured in a photoshoot to help the junior rugby player. 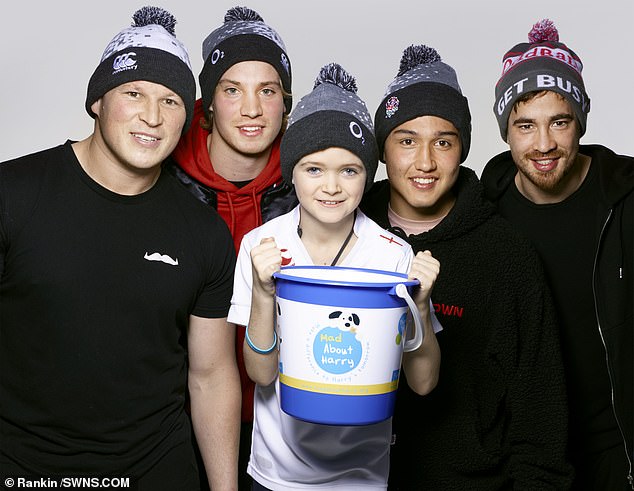 Harry Banks, from Woburn Sands in Bedfordshire, is being helped by England rugby stars (from left) Dylan Hartley, Harry Mallinder, Marcus Smith and Danny Cipriani, in a £500,000 fundraiser to pay for cancer treatment which could save his life

Harry was diagnosed with neuroblastoma, a rare cancer which develops from nerve cells left behind from a baby’s development in the womb, when he was just a toddler.

He went through two years of gruelling chemotherapy and surgeries and was given the all-clear in 2014.

But in November last year, the boy from Woburn Sands, Bedforshire, was told the cancer had returned in his brain.

Surgeons managed to remove the two-inch (5cm) tumour but have warned the cancer will come back if he doesn’t get extra treatment.

The Banks family must raise £500,000 before mid-March to send Harry to New York for pioneering drug treatment which could save his life – they have raised more than £210,000 so far.

Now the rugby stars and celebrity fashion photographer, Rankin, have done a photoshoot with Harry and his family to help raise awareness of the campaign.

Will Greenwood, 46, who was on England’s 2003 Rugby World Cup winning team and played for Leicester Tigers and Harlequins, said the story struck a personal chord.

Neuroblastoma is a rare cancer that affects children and usually starts in the abdomen.

Around 100 children, who are typically under five, are diagnosed every year in the UK.

The disease affects approximately 700 new children annually in the US.

In around half of cases, neuroblastoma spreads to other parts of the body, particularly the liver and skin.

Neuroblastoma’s cause is unclear. There may be a family-history link.

The main symptom is usually a lump in the abdomen, which may cause swelling, discomfort or pain.

If the disease affects the spinal cord, it can lead to numbness, weakness and loss of movement in the lower part of the body.

Treatment depends on how advanced the cancer is and the risk it will return after therapy.

Surgery, and chemo and radiotherapy, are commonly used.

He said: ‘I’m involved in a charity called Borne [which raises money for research into premature birth] and lost my little boy Freddie in 2002 and the brutal fact is that no parent should have to bury their child.

‘So if there is any chance I can help then of course I will.’

Gloucester player Danny Cipriani, 31, added: ‘When I heard about Harry and that he was a big rugby fan and big Saints fan, I made sure I was available to help.’

And England captain Dylan Hartley, 32, echoed their sentiments, saying: ‘This is a great cause.

Harry could barely contain his joy as he was hoisted up by a handful of the country’s biggest rugby stars during the photo shoot with his brother Oscar, 12, and his mother.

The rugby fan, who plays for his local rugby club in Ampthill, Bedfordshire, said: ‘It was good. It was exciting.

‘I liked it when they picked me up. It makes me feel happy because they are here to help me and I just want to say thank you to everyone.’

Mrs Banks said the support from England’s top rugby players and Rankin has been phenomenal and has been a big boost to the family’s morale. 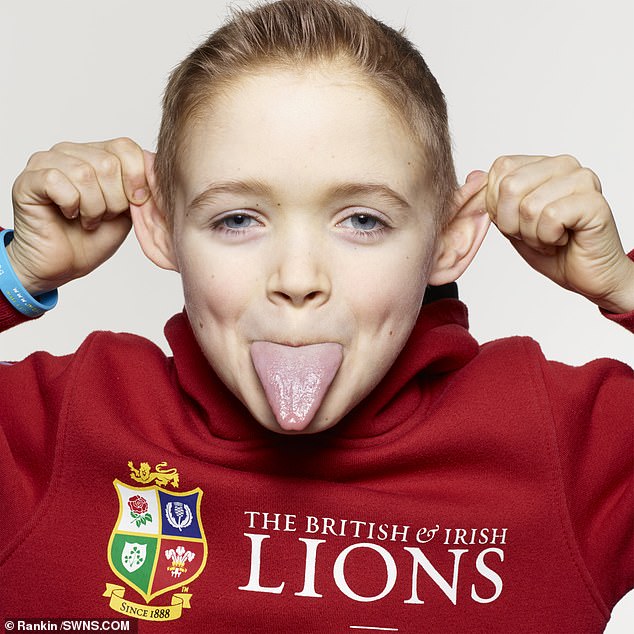 Harry, 10, plays for his local rugby club in Bedfordshire but had to have two years of chemotherapy and surgery to get rid of his neuroblastoma, a deadly cancer 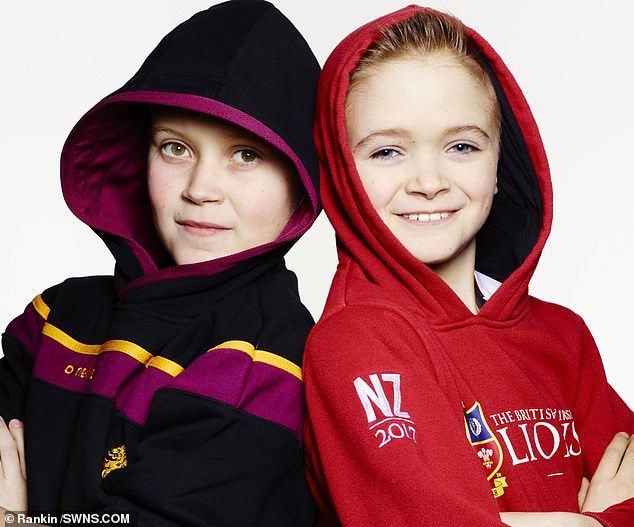 Harry (right) and his brother Oscar, 12, (left) enjoyed a photoshoot with players from the England rugby squad to try and promote a campaign to raise money for cancer treatment 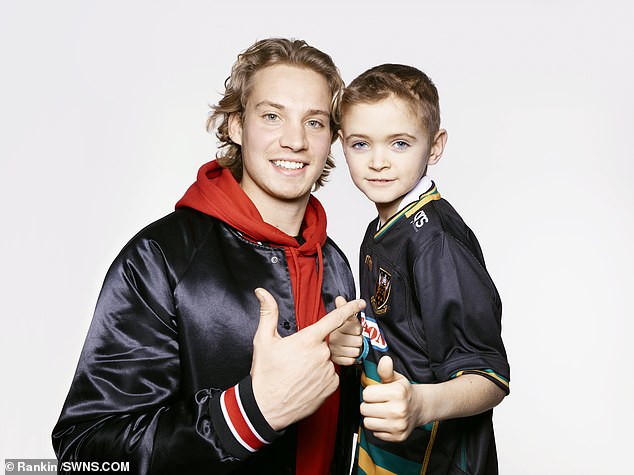 Harry, pictured with Harry Mallinder, a fly-half for Northampton Saints, said of the photoshoot: ‘It makes me feel happy because they are here to help me and I just want to say thank you to everyone’

‘Harry had reached the two year mark for remission and we took a breath and thought he was going to be OK,’ she said.

‘And then this happens out of nowhere and it was a huge shock. I was heartbroken.

‘We were initially told there was no cure if Harry relapsed but he now has a chance if he goes to New York or Barcelona and this is why we are carrying out this fundraising campaign.

‘Our consultant has recommended this treatment and has said if it was his child he would do the same which is good enough for me.’

The pioneering trial abroad is for 8H9, known as omburtamab, and is taking place at the Memorial Sloane Kettering Cancer Centre in New York.

The new drug carries radioactive iodine directly to the cancer to kill it and doctors have recommended Harry starts treatment in around eight weeks’ time.

Harlequins fly-half Marcus Smith, 19, read about Harry’s story on his Instagram feed and was so moved he pledged to help immediately.

He said: ‘I saw that Harry has always got a smile on his face and he’s going through these difficult times.

‘Seeing him here at this photo shoot looking so lively and having fun, I look at Harry and I realise I have nothing to complain about.’ 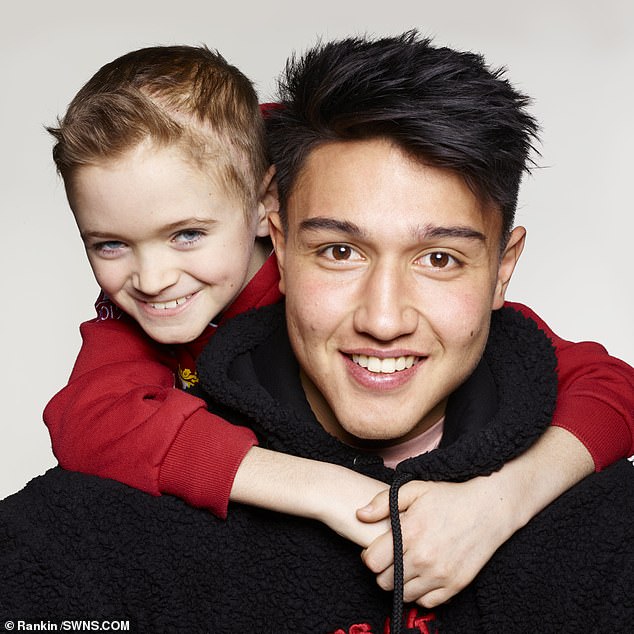 Marcus Smith, a 19-year-old fly-half for Harlequins (pictured with Harry) pledged to help with the campaign after seeing Harry’s story on Instagram. He said: ‘I look at Harry and I realise I have nothing to complain about’ 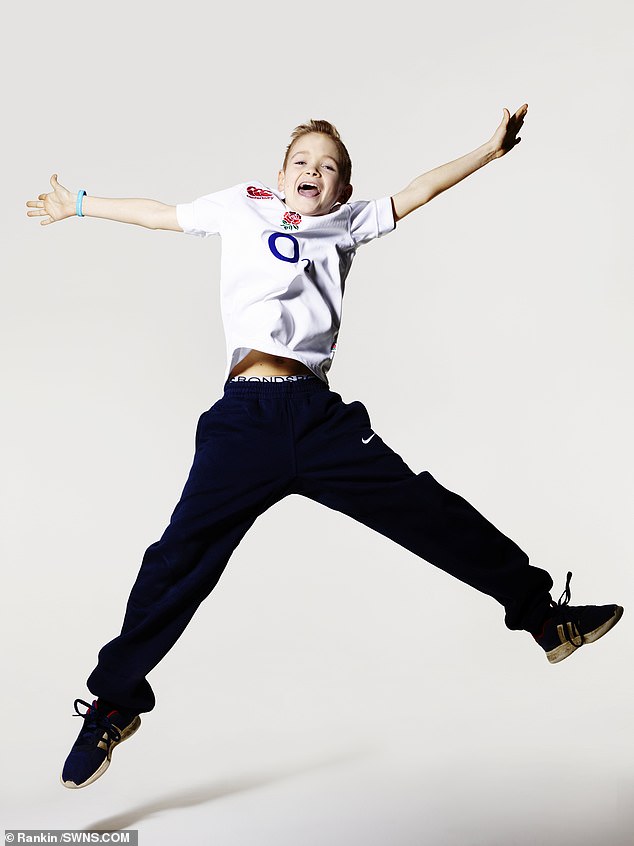 Harry’s family are trying to raise money to pay to get him onto a trial of a drug called 8H9, known as omburtamab, which carries radioactive iodine directly to the cancer to kill it 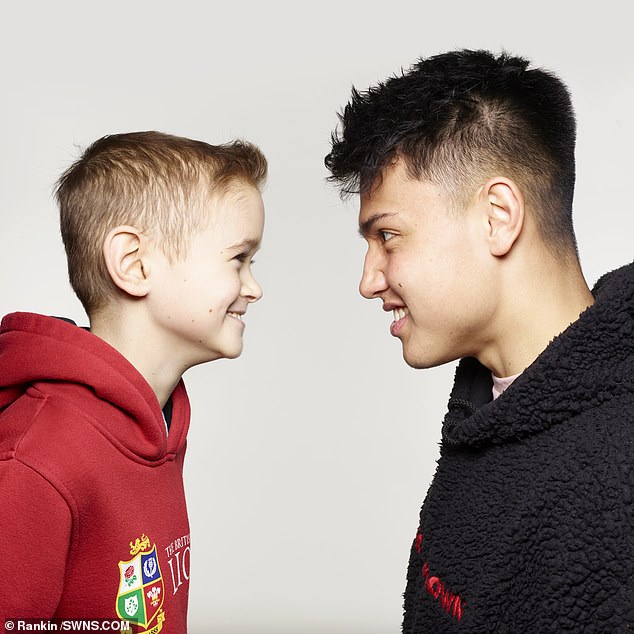 Harry’s mother said: ‘I will never allow myself to lose hope. Harry is a strong, very stubborn little boy, and he/we will fight this’ (Pictured: Harry with Marcus Smith)

For Northampton Saints player Harry Mallinder, 22, there was never any doubt he would be willing to help.

The England star said: ‘My club reached out to me and asked me if I would support Harry and I said of course I would.

‘My knee injury is irrelevant compared to what he is going through.’

Mrs Banks added: ‘We are very lucky to have such supportive family, friends and help from the rugby community and Rankin, but to achieve this target we need everyone to get behind the fundraising and make a difference.

‘I will never allow myself to lose hope. Harry is a strong, very stubborn little boy, and he/we will fight this.’

If you would like to donate head to the Mad About Harry Go Fund Me page.