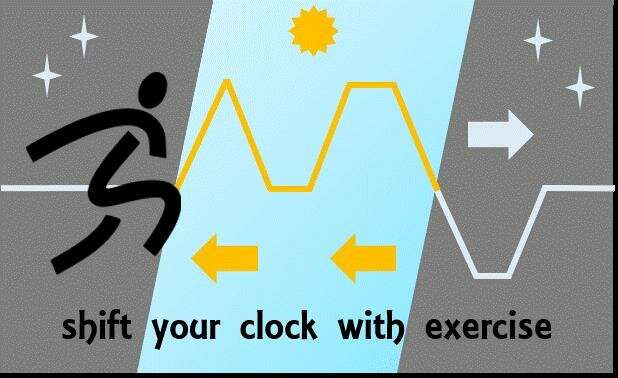 Exercise can shift the human body clock, with the direction and amount of this effect depending on the time of day or night in which people exercise. That’s according to new research in published in The Journal of Physiology. These findings suggest exercise could counter the effects of jet lag, shift work, and other disruptions to the body’s internal clock (e.g. military deployments) helping individuals adjust to shifted schedules.

The circadian “body”‘ clock is the 24 hour cycle that regulates many physiological processes including sleeping and eating. Many factors affect this internal body clock including light and time cues. Exercise has been known to cause shifts in the circadian clock however very little is known about this effect.

The researchers at University of California, San Diego and Arizona State University examined body clocks following exercise in 101 participants for up to five and a half days. The baseline timing of each participant’s body clock was determined from urine samples collected every 90 minutes to measure the time of the evening rise in melatonin and the peak of melatonin several hours later. Participants then walked or ran on a treadmill at a moderate intensity for one hour per day for three consecutive days. They exercised at one of eight different times of day or night, but each individual exercised at the same time on all three days or nights. The timing of the body clock was re-assessed following the third exercise session.

Given that the subjects tested were more physically active than average, the results might not translate to the average person. Further research will look at combining exercise with bright lights and melatonin to see what impact this has on body clocks, as well as examining the effect of changes in exercise duration and intensity on the body clock.