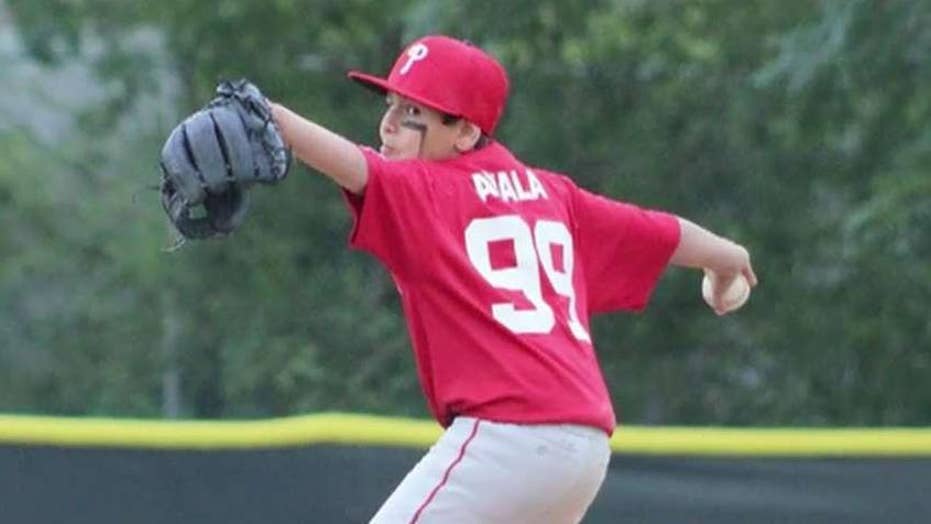 Examining the dangers of pushing youth sports to the extreme

More and more little league players are getting injuries that were once only seen in the professional ranks. Dr. Tommy John explains the alarming trend on ‘FOX &amp; Friends.’

SAN DIEGO – David Ayala was 11 years old when he began complaining about a sharp pain in his right arm.

Two years later, at age 13, the formidable Little League pitcher from San Diego underwent an operation that was once only seen in the Major League – Tommy John surgery – to repair a tear in the ulnar collateral ligament of his elbow.

“I was shocked that he needed surgery,” Tony Alaya, the boy's father, told Fox News. “He was so young. We worried that maybe he wouldn’t be able to play sports again or use that arm again."

David represents a rapid rise in the number of child athletes receiving the operation named after the legendary pitcher Tommy John, a four-time Major League all-star who in 1974 was the first person to undergo the surgery.

The biggest age group needing Tommy John surgery in the U.S. is between 15 and 19 years old, with nearly 60 percent of all surgeries falling within that age group, according to a 2016 study by Rush University Medical Center.

Doctors say over-usage of the body in competitive, year-round sports programs is to blame for an increase in major injuries among youth athletes nationwide.

“This most absolutely is a national problem, and it’s something that’s bigger than one sport,” John said. “In the past, we were dealing with common youth injuries, like broken bones and bruises, but now we’re seeing pediatric ACL reconstructions, concussions, Tommy John surgeries and stress fractures in spines. Quite simply, kids are being pushed beyond their limit."

There are many factors affecting the pressure for children to perform on the playing field. Parents are investing thousands of dollars on year-round sports leagues and programs on their children. Families spend up to 10 percent of their income on youth sports – with some spending up to $20,000 a year – according to a 2017 report by Time Magazine. U.S. youth sports is now a $17 billion market compared to a $15 billion NFL market, Massachusetts-based WinterGreen Research reports.

Many children are also being pushed to specialize in only one sport at an early age – a mistake that can lead to injury and burnout, experts say.

“If a coach tells you that you need to play just one sport, you need to find another coach,” said Jay Paris, a San Diego-area coach of 25 years who has worked with athletes aged 7 to 14.

“This is an age where you need to be opening up all athletic doors,” Paris said.  “There are of course over-use injuries but I see more of a burnout factor in kids who specialize in only one sport.”

“It ceases becoming fun and turns into a chore. They say, ‘Play baseball.’ They don’t say, ‘Work baseball,’” he said.

For David Ayala, now 17, a successful recovery from Tommy John surgery in 2015 allowed him to return to his beloved sport. But his father cautions other parents about the dangers of competitive youth sports.

“Let your child rest,” Ayala said. “In hindsight, I shouldn’t have pushed him to play year-round – non-stop – because eventually, it takes its toll. He was still growing.”

“No one is going to scout your kid at 8, 9, 10 years old,” he said, noting that few child athletes will go on to play on the collegiate level. “Your child’s health must come first.”