Fetuses exposed to pesticides often used on citrus and apple trees are up to 87% more likely to develop rare eye cancer that may leave them with vision problems or blindness, study finds

Fetuses exposed to pesticides often used on citrus and apple trees are up to 87 percent more likely to develop a rare type of eye cancer, a study suggests.

Scientists at the University of California, Los Angeles compared the use levels of nearly five dozen farmyard chemicals near the homes of 335 children under five years old who developed retinoblastomas to healthy children from the same state.

They found four chemicals where exposed children were more likely to have the cancer, which can permanently alter children’s vision leading to problems reading and writing or lead to blindness.

One of them — acephate — is already banned in Europe. The others were bromacil — which should not be used near homes —, Pymetrozine and kresoxim-methyl.

Scientists behind the study warned pesticides are particularly dangerous for children because their organs are still forming, raising the risk they are able to disrupt DNA or inflame cells causing the cancer.

They called on farmers to be more aware of what chemicals they were spraying on their fields, and urged the Environmental Protection Administration (EPA) to beef up its regulations on pesticide use. 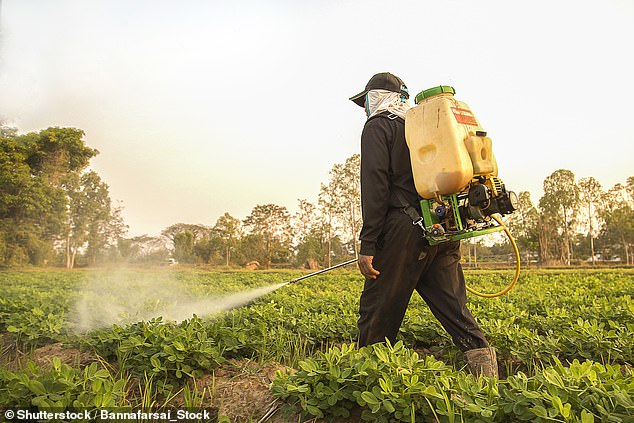 The study found that exposure to four chemicals used as pesticides can raise their risk of retinoblastomas, or a rare type of eye cancer (stock image)

Retinoblastomas — a type of eye cancer — can affect either one or both eyes and start when cells begin to grow out of control due to a genetic mutation, says the American Cancer Association (ACS).

Most likely in children under three years old, symptoms include a white or pink pupil, lazy eye or early signs of vision problems.

Sufferers are offered radiation therapy or laser therapy to kill cancer cells as well as chemotherapy in certain cases.

But this can leave youngsters with life-long vision problems, blindness and raise their risk of suffering a second cancer later in life.

Retinoblastoma is a rare type of eye cancer that can affect young children, usually under the age of 5.

Its symptoms include an unusual white reflection in the pupil, a squint, a red or inflamed eye and poor vision.

Retinoblastoma happens when retina eye cells — which are supposed to grow very quickly and then stop growing during a baby’s early development — continue to grow and form a cancer.

Depending on the size of the tumour. If it is small, laser and freezing treatments that aim to destroy the tumour will be carried out.

If it is larger, youngsters may undergo surgery, chemotherapy and radiotherapy.

Some children may suffer sight loss or need to have their eye removed.

Between 40 and 50 cases of retinoblastoma are diagnosed in the UK every year.

Around four in 10 cases are diagnosed in the first year of life and incidence rates drop to a very low rate after five years of age.

Around two-thirds of retinoblastomas are diagnosed in one eye only.

More than nine in 10 cases are detected early and cured before the cancer spreads outside the eyeball.

In their study — published last month in the International Journal of Hygiene and Environmental Health — scientists trawled through California’s cancer registry.

They extracted all cases of retinoblastomas in under-5s diagnosed from 1998, about a decade after the registry began, until 2013.

They then collected the addresses of these cases and those of 120,000 healthy children born in the state over the same period. The latter were collected randomly.

Next, the scientists collected Pesticide Use Reports on which pesticides were used around the children’s homes in the months before they were born.

California has required since 1990 that all pesticide uses in agriculture are reported centrally.

Results showed that children with the cancers were more likely to have been exposed to four specific pesticides compared to healthy youngsters.

Those exposed to bromacil — typically used on citrus plants as well as to clear weeds — were 87 percent more likely to develop unilateral retinoblastoma, or the cancer only in the eye.

Acephate — also used on citrus trees — raised the risk of this type by 70 percent.

But kresoxim-methyl exposed children — used on apples to control a fungus — were 60 percent more likely to have all types of retinoblastomas, while those who had contact with pymetrozine — which kills aphids and whitefly on field crops — were 45 percent more likely.

The scientists did not look at what concentrations of the pesticides had a higher association with cancer.

No link was suggested for the other 54 pesticide chemicals included in the study.

Lead author Dr Shiraya Thompson, an epidemiologist, urged farmers to be more conscious about the potential health risks of pesticides they use.

She also urged the EPA to consider limiting the use of harmful chemicals to reduce the risk of cancer.

‘You might have very little control over what’s going on in the cornfields near you,’ she said.

‘And you might not even be aware of what farmers near you are putting down.’

This study was observational, meaning it could not determine whether the chemicals had caused the cancer of it was down to another factor.

But scientists have been warning for years that pesticide exposure raises the risk of cancers in people.

Scientists are not yet clear on what causes retinoblastomas, but the ACS says exposure to chemicals and radiation may raise the risk. Having mothers that eat too little fruit and vegetable could make the cancer more likely.

Pregnant mothers could have been exposed to the chemicals either from run-off from the farmyards or through work.

Statistics show that around six to ten percent of rural-dwellers in the state work in the agricultural sector.