As a trained Army marksman in peak physical condition, Marcus Horton was ready for action in a war zone at a moment’s notice.

But nothing could have prepared him for the agonising battle he faced after waking one morning in January 2017 to find the whole right side of his face had completely collapsed, leaving him drooling, speechless and unable to close his right eye.

‘I was terrified that I’d had a stroke,’ says Marcus, 31, who was serving with the Royal Welsh Regiment at the time. 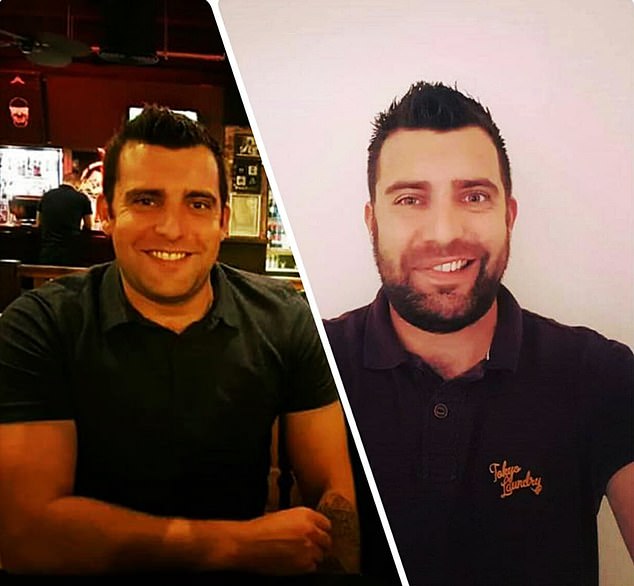 Marcus Horton is pictured left before he suffered from Bell’s palsy. And he’s pictured right afterwards

The surprisingly common condition occurs when the cranial nerve that controls the muscles on one side of the face becomes inflamed. This prevents it from transmitting signals to the muscles around the eyes, nose, mouth, cheeks and forehead, leading to half the face becoming paralysed.

It can affect anyone: Hollywood stars Pierce Brosnan, George Clooney and Angelina Jolie are among those who have had it, and recovered.

Bell’s palsy strikes at least 25,000 people a year in the UK – the equivalent of nearly 70 every day – and is often triggered by something as innocuous as a cold.

Marcus had been bedridden with flu just days earlier.

More than 70 per cent of sufferers make a complete recovery – as long as they are treated with high doses of inflammation-dampening steroid tablets within 72 hours of symptoms appearing.

The drugs work by easing the problematic swelling around nerves in the face. 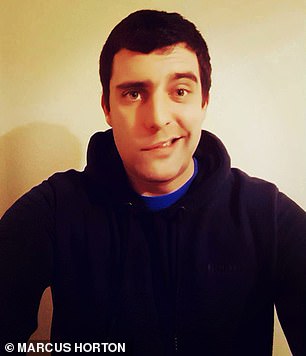 Engulfed by crippling depression, in October 2018, Marcus (pictured with Bell’s palsy) was medically discharged from the Army, signalling the end of his dream career. He postponed his wedding to Hannah – too embarrassed that he would not be able to smile on the big day

But after that window of opportunity, the chances of a full recovery plummet because the nerves and muscles can become so damaged that it is impossible to restore them to their full capacity, often leaving sufferers with permanent facial disfigurement that can wreck their lives.

When Marcus and Hannah got to Salisbury General Hospital near where he was stationed, doctors initially dismissed the couple’s suggestion of Bell’s palsy and tested for meningitis. ‘They drew a complete blank,’ says Marcus. ‘Then, five days after I was admitted, a specialist from Southampton came to see me. The moment she walked in the door, she said I did in fact have Bell’s palsy.’

It was a crushing blow, not least because by then Marcus had missed the vital chance to get the drugs he needed.

Over the next two years, he lost vision in his right eye – as he was unable to blink – and suffered hearing loss and facial pain as a result of the nerve damage. He had to start teaching himself to speak again using YouTube videos.

Engulfed by crippling depression, in October 2018, Marcus was medically discharged from the Army, signalling the end of his dream career. He postponed his wedding to Hannah – too embarrassed that he would not be able to smile on the big day.

‘It felt like nobody could help me,’ he says.

And it seems Marcus is far from alone. In fact, thousands of Britons are at risk of being disfigured for life as they ‘slip through the medical net’ – and don’t receive the right treatment for facial paralysis.

Shocking new figures suggest that almost one in five – equivalent to about 5,000 people across the UK every year – are initially misdiagnosed, delaying their access to vital drugs by weeks or even months and increasing the chances of permanent facial damage. Two-thirds also wait more than a year to see a specialist, despite NHS guidance that patients should be referred within three months.

How Bell’s palsy can hit your eating, speaking and blinking

According to the new survey of more than 400 patients by the charity Facial Palsy UK, more than 40 per cent of patients who pleaded for help found their GPs were unable to refer them for specialist treatment – as they didn’t know which was the right doctor to see them. The poll results back up disturbing findings from a 2013 study in the British Medical Journal, which found that as many as 44 per cent of UK Bell’s palsy patients were not given urgent steroid treatment.

Mr Bill Townley, a consultant plastic surgeon at Guy’s and St Thomas’ NHS Foundation Trust in London and an expert in the condition, says the underlying problem is that many doctors still see it as purely a cosmetic issue when in fact it has devastating physical and mental health consequences.

Mr Townley says: ‘There’s no coherent strategy in place nationally, which means hundreds if not thousands of patients each year are left with lifelong facial palsy that could have been avoided with earlier intervention by specialists.

‘About two-thirds of those who are given steroid treatment early will make a full recovery.’

He says patients who do not respond to rapid steroid therapy can still recover, but this depends on them getting specialist physiotherapy in the first few months after falling ill, when the nerves and muscles in the face are still partially working.

Karen Johnson, deputy CEO of Facial Palsy UK, says special exercises can at least partially reverse much of the damage, even years later.

‘The right kind of facial training is crucial,’ she says.

‘If you suspect you have Bell’s palsy and your GP is reluctant to refer you to a therapist experienced in the management of it, direct him or her to our website. You may need to insist.’

Marcus and Hannah did finally wed, in April 2018, despite his fears about his appearance on the big day.

He says: ‘I just want my story to help someone else with Bell’s palsy get the early treatment they need to make a proper recovery.’