FDA approves first US coronavirus treatment: Doctors across the US can now treat the sickest Americans with plasma from recovered patients

The US Food and Drug Administration on Tuesday approved the first treatment in the US for the coronavirus that has infected more than 50,000 Americans: blood plasma from people who have cleared the infection.

Blood plasma from recovered COVID-19 patients is rich in antibodies their immune system has developed to fight the infection.

China began using the century-old method to treat its patients last month, and New York Governor Andrew Cuomo announced Monday that plasma would be tested there to treat the sickest of the state’s more than 25,000 coronavirus patients.

The treatment may be the best hope for critically ill COVID-19 patients while scientists work to develop new, specific treatments for the disease and test experimental drugs like chloroquine and remdesivir. 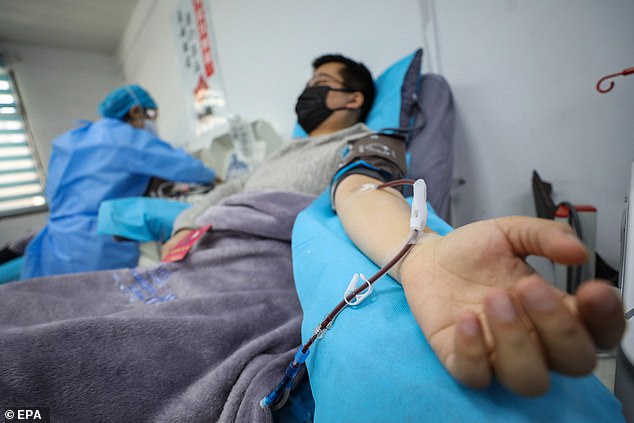 Blood plasma donated from recovered patients can now be used as a treatment for people critically ill with COVID-19, the FDA said Tuesday. The method is already used in China, where recovered people like Dr Yong Yuefeng (pictured) have given plasma to treat others 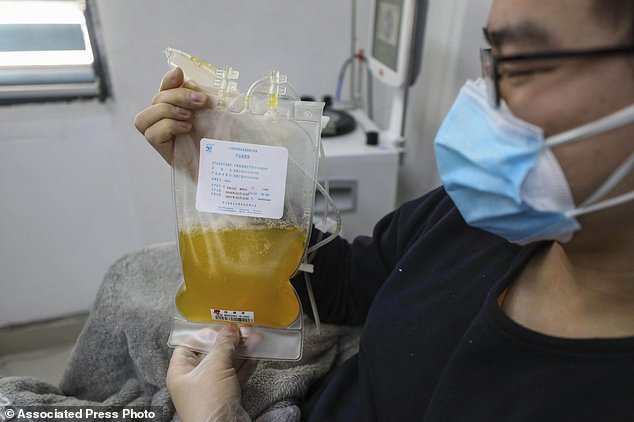 ‘…given the public health emergency that the expanding COVID-19 outbreak presents, while clinical trials are being conducted, FDA is facilitating access to COVID-19 convalescent plasma for use in patients with serious or immediately life-threatening COVID-19 infections,’ the agency said in a statement, although officiails acknowledged that it doesn’t work for every disease.

The treatment was used to fight off flu and measles outbreaks in the days before vaccines, and tried more recently against SARS and Ebola and it just might work for COVID-19, too.

Now a network of US hospitals that has been waiting on permission from the Food and Drug Administration to begin large studies of the infusions both as a possible treatment for the sick and as vaccine-like temporary protection for people at high risk of infection will be able to begin administering it.

There’s no guarantee it will work.

‘We won´t know until we do it, but the historical evidence is encouraging,’ Dr. Arturo Casadevall of Johns Hopkins University´s school of public health told The Associated Press.

Casadevall drew on that history in filing the FDA application. The FDA is ‘working expeditiously to facilitate the development and availability of convalescent plasma’ a spokesman said.

WHAT EXACTLY IS THIS POSSIBLE THERAPY?

It may sound like ‘back to the Stone Age,’ but there is good scientific reason to try using survivors’ blood, said Dr Jeffrey Henderson of Washington University School of Medicine in St Louis, who coauthored the FDA application with Casadevall and another colleague at the Mayo Clinic.

When a person gets infected by a particular germ, the body starts making specially designed proteins called antibodies to fight the infection. After the person recovers, those antibodies float in survivors´ blood – specifically plasma, the liquid part of blood – for months, even years.

One of the planned studies would test if giving infusions of survivors’ antibody-rich plasma to newly ill COVID-19 patients would boost their own body´s attempts to fight off the virus.

To see if it works, researchers will measure if the treatment gave patients a better chance of living or reduced the need for breathing machines.

One caution: While regular plasma transfusions are a mainstay of medicine, very rarely they can cause a lung-damaging side effect.

Sort of, but unlike a vaccine, any protection would only be temporary.

A vaccine trains people´s immune systems to make their own antibodies against a target germ. The plasma infusion approach would give people a temporary shot of someone else´s antibodies that are short-lived and require repeated doses.

Still, if FDA agrees, a second study would give antibody-rich plasma infusions to certain people at high risk from repeated exposures to COVID-19, such as hospital workers or first responders, said Dr Liise-anne Pirofski of New York’s Montefiore Health System and Albert Einstein College of Medicine.

That also might include nursing homes when a resident becomes ill, in hopes of giving the other people in the home some protection, she said. 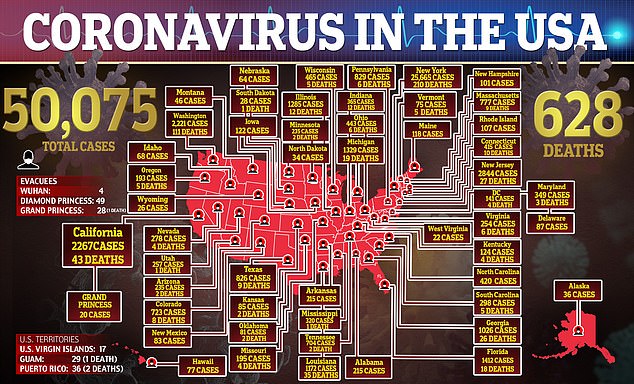 The FDA’s decision comes as US cases surge past 50,000 and doctors become desperate for treatments – including unproven ones like Plaquenil, the anti-malaria drug approved only for experimental ‘compassionate’ use in the US

These plasma infusions were used most famously during the 1918 flu pandemic, and against numerous other infections, such as measles and bacterial pneumonia, before vaccines and modern medicines came along.

Long-ago research is sketchy. But in the Journal of Clinical Investigation earlier this month, Casadevall and Pirofski cited evidence that 1918 flu patients given the infusions were less likely to die.

And a 1935 medical report detailed how doctors stopped a measles outbreak from sweeping through a boarding school using ‘serum’ from prior patients.

The old-fashioned approach still is dusted off every so often to tackle surprise outbreaks such as SARS in 2002, and in 2014 when Ebola survivors´ plasma was used to treat other patients during the West Africa epidemic.

Even during those recent outbreaks, strict studies of the technique were not done, but Casadevall said there were clues that the plasma helped.

Casadevall thinks that when it didn’t work, it may have been used too late. ‘Somebody at the end of their lives, it´s very hard to affect’ any disease at that point, he cautioned.

A more modern approach is to brew this type of antibody in the lab, something Regeneron Pharmaceuticals and other companies are working on.

Using blood from COVID-19 survivors is a decidedly more labor-intensive approach – but researchers could start banking the plasma as soon as regulators give the OK. 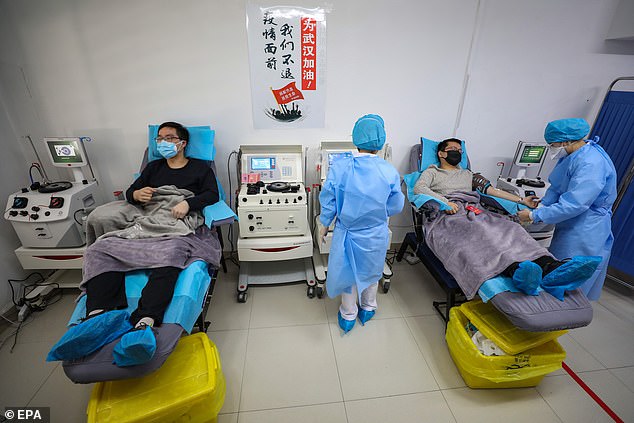 Plasma transfusion has been used to treat infections diseases for 100 years. It doen’t work for every disease but has been employed in China (pictured) to treat its COVID-19 patients

HOW WOULD DOCTORS GET THE PLASMA?

Blood banks take plasma donations much like they take donations of whole blood; regular plasma is used in hospitals and emergency rooms every day.

If someone´s donating only plasma, their blood is drawn through a tube, the plasma is separated and the rest infused back into the donor´s body.

Then that plasma is tested and purified to be sure it doesn’t harbor any blood-borne viruses and is safe to use.

For COVID-19 research, the difference would be who does the donating – people who have recovered from the coronavirus.

Scientists would measure how many antibodies are in a unit of donated plasma – tests just now being developed that aren’t available to the general public – as they figure out what’s a good dose, and how often a survivor could donate.

Researchers aren´t worried about finding volunteer donors but caution it will take some time to build up a stock.

‘I get multiple emails a day from people saying, ‘Can I help, can I give my plasma?´’ Pirofski said.