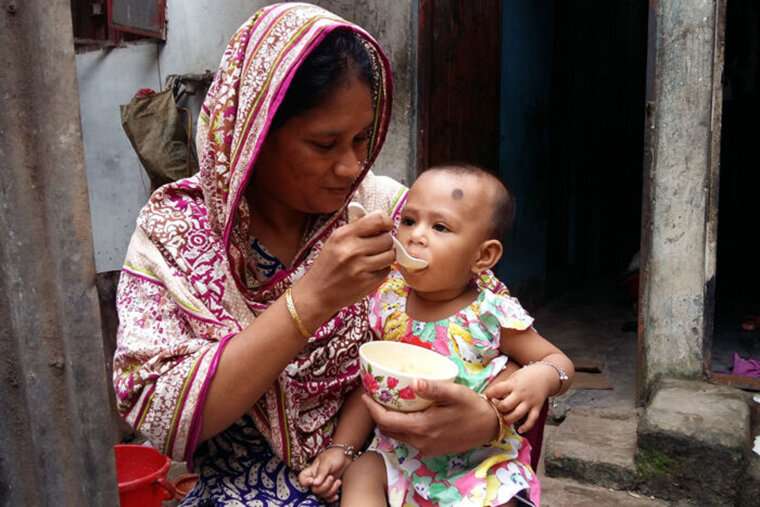 A new type of therapeutic food specifically designed to repair the gut microbiomes of malnourished children is superior to standard therapy in promoting growth, according to the results of a proof-of-concept clinical trial conducted in Bangladesh.

The study, conducted by an interdisciplinary team of researchers from Washington University School of Medicine in St. Louis and the International Centre for Diarrhoeal Disease Research in Dhaka, Bangladesh (icddr,b), was designed to supplement the diet of malnourished children with a formulation that contains locally available, culturally acceptable foods selected based on the ability of the ingredients to boost key growth-promoting gut microbes. The work supports the notion that healthy growth of infants and children is closely linked to healthy development of their gut microbial communities—or microbiomes—after birth.

The results of the study are published online in The New England Journal of Medicine.

Childhood malnutrition is a major global health challenge, affecting over 150 million children under the age of 5 worldwide, with a disproportionate impact in South Asia and Sub-Saharan Africa, according to the World Health Organization. The ongoing COVID-19 pandemic is further exacerbating this problem. Numerous studies have shown that malnutrition is not due to food insecurity alone but instead reflects a combination of factors, including an important role for the gut microbiome, which fails to develop properly during the first two years of life in malnourished children.

“Malnutrition has proven extraordinary difficult to treat—standard calorie-dense therapeutic foods have been shown to prevent the deaths of malnourished children, but have been ineffective in overcoming growth stunting and other damaging effects of malnutrition, including impaired brain development, bone growth and immune function,” said senior author Jeffrey I. Gordon, MD, the Dr. Robert J. Glaser Distinguished University Professor and director of the Edison Family Center for Genome Sciences & Systems Biology at the School of Medicine. “In an attempt to address this problem, we are investigating whether repairing the poorly developed microbial communities of malnourished children will impact their growth. This is the first time that a microbiome-directed therapeutic food has been compared with a standard therapy in malnourished children; moreover, it produced a superior rate of weight gain, the key primary clinical outcome of the trial.”

An earlier, one-month long pilot clinical study conducted by the team in Bangladesh had provided evidence for the benefits of the microbiome-directed therapeutic food in a small number children who received it; however, the study was not sufficiently large or long enough to confirm the effects of the new food on growth. The current three-month long clinical trial, overseen by Tahmeed Ahmed, MBBS, Ph.D., executive director of the icddr,b, involved 118 children ages 12 to 18 months who lived in an urban slum called Mirpur in Dhaka, Bangladesh. All these children had been diagnosed with acute malnutrition, a condition in which the body consumes fat reserves and breaks down muscle, resulting in wasting, or weight loss. The immune system is also weakened, making these children more susceptible to other illnesses.

“This work is based on our studies that have shown that a derangement in the gut microbiome is responsible for malnutrition of children,” Ahmed said. “We have successfully used a food made of local ingredients to repair the deranged gut microbiome and thereby improve the growth of children receiving the food. In an era where we so sadly still have staggering numbers of children suffering and dying from malnutrition, our discovery of the microbiome-directed complementary food can be a game changer.”

The children received 25 grams of their assigned therapeutic foods twice daily for three months. The children’s height, weight and mid-upper arm circumference were measured at regular intervals throughout the intervention period and for one month after cessation of treatment. Blood and stool specimens were also collected at various times to assess changes in the levels of nearly 5,000 proteins in the blood, and to quantify the effects of the therapies on the representation of specific beneficial microbes in stool samples.

The researchers found that the rate of change in the children’s weight and their mid-upper arm circumferences were significantly greater in the group receiving the microbiome-directed food compared with the standard therapeutic food; this growth superiority was sustained even a month after the children had stopped receiving the nutritional intervention, which is the latest time point to be analyzed so far.

“When we look at the standard clinical measurement for assessing acute malnutrition—the weight-for-length z score—the difference between the two treatment groups was even more significant one month after we stopped the treatment,” said co-first author Robert Chen, a doctoral student in Gordon’s lab. “If this rate of growth was maintained for a year, we estimate an improvement in the weight-for-length z score of almost one full standard deviation.

“Children with acute malnutrition typically have declining or in the best case stable weight, so if this extrapolation holds up, it would be a major clinically relevant improvement in growth outcomes,” Chen added.

Said co-first author Ishita Mostafa, an assistant scientist at the International Centre for Diarrhoeal Disease Research: “We continue to monitor and collect samples from these children; this is critical in order to determine if the effects of this new treatment are indeed durable over time, or whether the intervention needs to be sustained for longer periods.”

Further, the researchers found 70 proteins in the blood samples that were positively correlated with increased weight, with greater improvements in their levels occurring after the microbiome-directed treatment compared with the standard intervention.

“These proteins are key regulators of bone biology, neurodevelopment and immune function,” Gordon said. “We discovered that this food can nurture and expand the abundance of beneficial microbes, with accompanying boosts in the levels of beneficial proteins in their human hosts that have impactful effects on growth.

“The rate of improvement in the weight of the children receiving the new therapeutic food designed with healthy gut microbes in mind was significantly greater even though its caloric density was 20% lower than the standard food,” Gordon added. “This suggests that the repair of the gut microbiome, and not just additional calories, is key to healthy growth in these children.”

The teams led by Gordon and Ahmed, funded by the Bill & Melinda Gates Foundation, plan to initiate further studies into whether therapeutic foods that nurture beneficial gut microbes can help malnourished children in other parts of the world. This involves a program of developing microbiome-directed foods that contain distinct but functionally “biosimilar” ingredients that are readily available, affordable and culturally acceptable to parents and children living in these other countries. Also, Gordon and his colleagues plan to investigate whether repairing dysfunctional gut microbial communities at younger ages and over longer timeframes could have an even greater impact.

“After the six-month period of breastfeeding recommended by the World Health Organization, we think there may be an early window to introduce these types of microbiome-directed therapeutic foods and potentially have a bigger effect,” said co-author Michael J. Barratt, Ph.D., associate professor of pathology and immunology and executive director of the Center for Gut Microbiome and Nutrition Research at Washington University.

The researchers also are planning studies to investigate the benefits of microbiome-directed therapeutic foods during pregnancy to determine whether they can not only improve the gut microbiomes of the malnourished mothers but also foster the transmission of healthy gut microbial communities to their infants and thus help break the devastating intergenerational cycle of malnutrition.