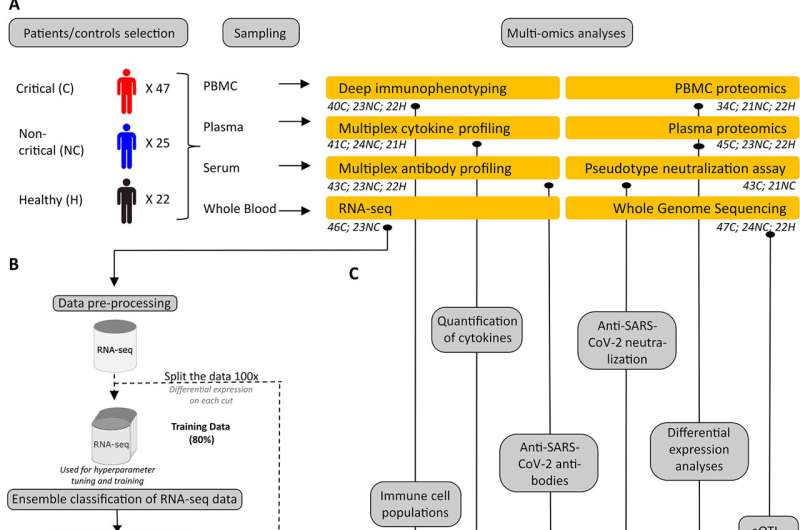 An international team of researchers has isolated five genes that are more active in young people with severe COVID-19 symptoms than in those with less severe symptoms. In their paper published in the journal Science Translational Medicine, the group describes their genetic analysis of young infected people with no known contributing factors for the disease.

Some healthy young people, despite having no apparent underlying conditions, still develop very serious COVID symptoms. Why this happens remains a mystery. In this new effort, the researchers found a possible clue—genes that appear to reduce the body’s ability to fight the disease when activated.

The work involved collecting plasma samples from 72 young, hospitalized COVID patients, 47 of whom were critically ill. None of those sampled had any underlying conditions that might explain their symptoms. The team also collected samples from 22 infected young people who had few or no symptoms to serve as a control group. The researchers noted at the outset that those patients who were the most ill also suffered from increased inflammation and coagulation. They then conducted whole-genome sequencing on the samples, along with RNA sequencing, cell proteomics, cytokine profiling and immunophenotyping. They also used a machine-learning application to spot patterns in the genes. Their analysis revealed five genes that were more active in the patients with severe symptoms. One, ADAM9, was found to be the most prevalent.