Girl, seven, with agonising headaches is diagnosed with a golf ball-sized brain tumour after a trip to Specsavers

A seven-year-old girl was diagnosed with a brain tumour after a trip to Specsavers.

Roxanne Knight started suffering from headaches in December, which left her feeling like she had been ‘punched in the head’.

Doctors dismissed it as just a migraine and prescribed painkillers – despite the discomfort leaving her unable to sleep or eat.

Sensing something was seriously wrong, Roxanne’s mother Irene, 45, took her to have her eyes tested in April.

An optometrist noticed swelling around the youngster’s optic nerve during a check-up, which was later found to be a tumour. Headaches are a common sign of brain tumours.

Roxanne, of Wickersley, Rotherham, endured a six-hour operation to remove the golf ball-sized benign mass in May and is back to her ‘brilliant’ self. 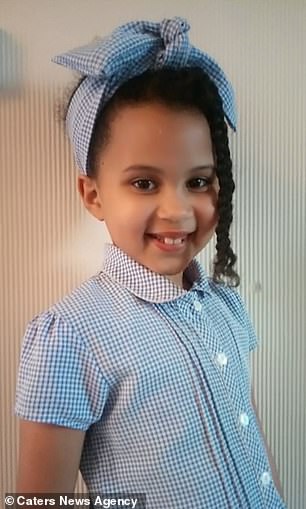 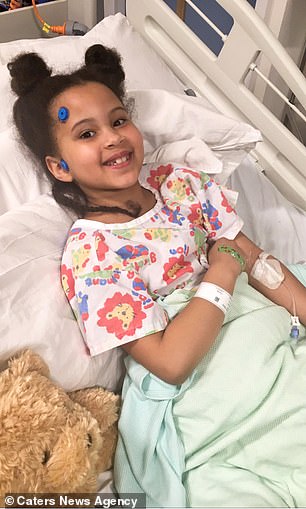 Roxanne Knight (left) was diagnosed with a brain tumour during a check-up at Specsavers. The youngster is pictured right in hospital in May after she endured a six-hour operation to have the golf-ball sized mass removed. She is now back to being her ‘old self’ again 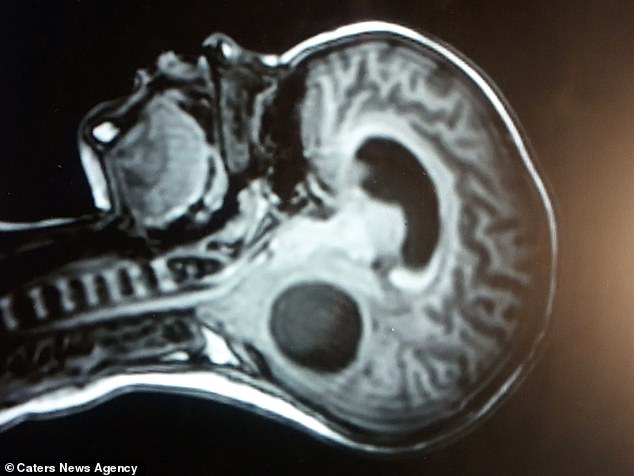 Scan shows the ‘massive’ black, circular tumour at the back of Roxanne’s head. This was ‘pressing forward’ and causing the agonising headaches doctors dismissed for months

Speaking of her daughter’s symptoms, Mrs Knight said: ‘She had really strong headaches, they would last for quite a long period of time.

‘It became an everyday thing, the headaches became more frequent.’

Roxanne added: ‘It felt like someone was punching me in the head. I just wanted something to make it go away.’

Doctors prescribed painkillers and told Roxanne to keep track of her symptoms throughout the day, but were largely unconcerned.

Mrs Knight, who is also mother to a nine-year-old boy called Ayden, said: ‘The doctors told me it was a migraine but I didn’t think so.

‘It affected every aspect of her life, she couldn’t sleep or eat properly. Each time she had a headache, she was panicking and crying, she wouldn’t sleep.’

It was not until Roxanne developed a pronounced vein on the side of her head that Mrs Knight, who shares her children with her husband Steve, 62, realised something was seriously wrong.

‘The doctors told me it was a migraine but I didn’t think so,’ Mrs Knight said. ‘That’s when it came to me to get her eyes tested.

‘There was no way I was going to sit at home and wait for the tablets to work.’ 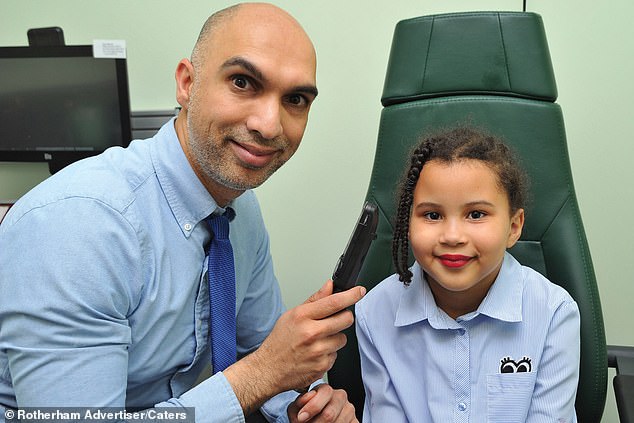 Optomertrist Saj Hussain (pictured with Roxanne) spotted the tumour after the youngster’s mother took her to have her eyes tested. This led to her being immediately referred for a hospital appointment, where a scan confirmed the mass inside her brain 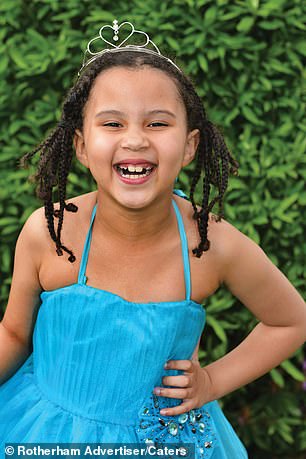 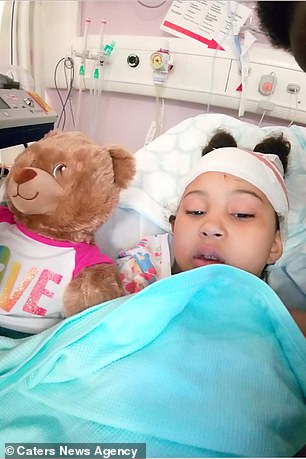 After months of struggling to eat and sleep due to the pain, Roxanne is pictured left laughing on June 19, one month after her operation. Nobody expected the youngster (pictured right in hospital) to require surgery when she turned up for her eye exam

HOW DO EYE EXAMS PICK UP ON BRAIN TUMOURS?

Brain tumours can cause changes to vision.

A patient’s eyesight may be blurred, restricted or just abnormal.

Some also ‘see double’ or experience ‘clouds of grey’ when they try to stand.

These symptoms can occur due to the optic disc at the back of the eye becoming swollen as a result of increased pressure within the skill.

The optic disc is positioned on the retina where the optic nerve enters the eye from the brain.

This intracranial pressure can be picked up during routine eye examinations, even before symptoms begin.

If the tumour goes undetected and is allowed to grow, it can squeeze healthy brain tissue, including the main cranial nerves.

This can affect how the nerves function, leading to reduced vision.

Symptoms vary depending on the tumour’s position.

Those in the occipital lobe at the back of the brain can lead to vision loss and difficulty identifying colours or objects.

Whereas those in the brain stem can cause double vision, as well as unsteadiness and facial weakness.

If you think you may have a brain tumour, speak to your GP and book an eye test.

While at her Specsavers’ appointment, the seriousness of Roxanne’s condition became clear.

‘I certainly didn’t expect what they did tell me.’

The optometrist, called Saj Hussain, reportedly told Mrs Knight he only sees cases like this every 10-to-15 years.

‘The doctors explained [the tumour] had been pushing to the front and causing the headaches,’ Mrs Knight said.

‘If the pressure had been in a different direction it could have affected her speech, her heart or her spinal cord.’

Once at hospital, medics carried out a scan on the youngster’s head, with her parents seeing the size of her tumour for the first time.

‘It was massive,’ Mrs Knight said. ‘It was so scary to think this massive thing was in my child’s head.’

Doctors then broke the news Roxanne would have to go under the knife to have the tumour removed.

‘I was in a very big shock,’ Mrs Knight said. ‘I didn’t know what to do, knowing your child is going to have such a serious surgery.’

Medics only discovered after the tumour had been removed that it was benign and not cancerous.

Despite Mrs Knight’s concerns, the operation was a success and Roxanne is back to her ‘old self’.

‘She’s brilliant now,’ Mrs Knight said. ‘She is well, she hasn’t had any headaches at all, and she’s sleeping well and her eyes are perfect.’ 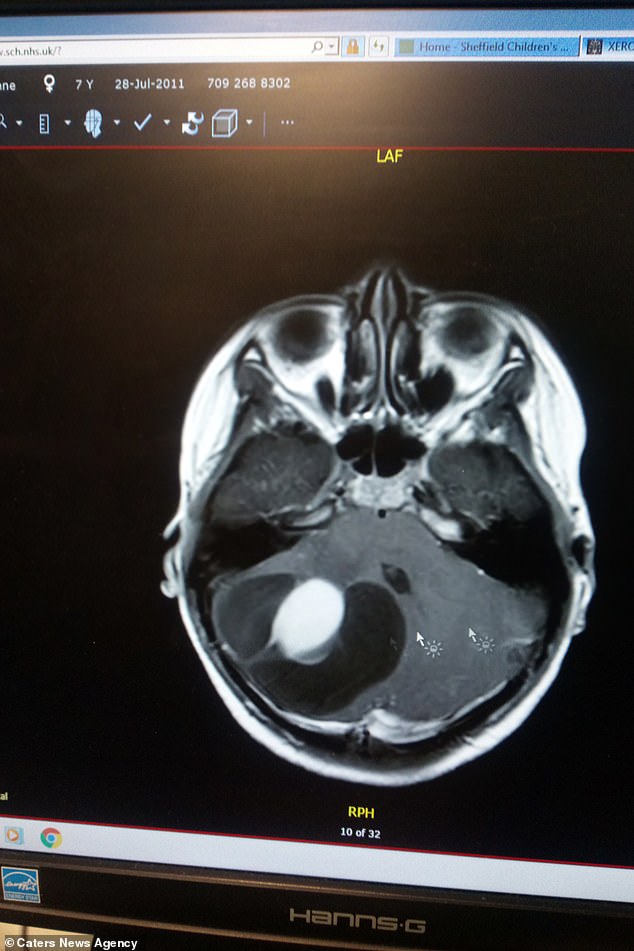 The tumour is pictured as a white, circular mass before Roxanne had it removed 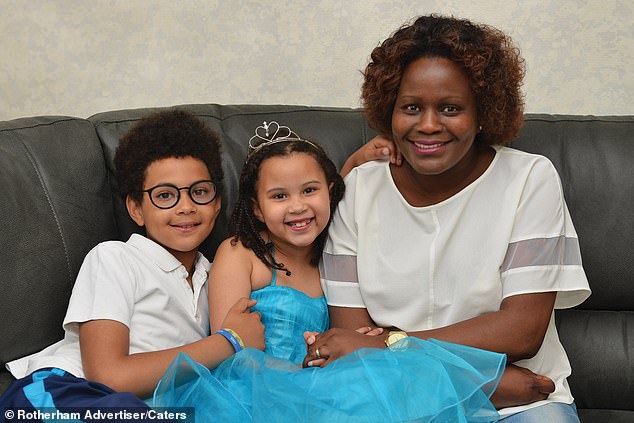 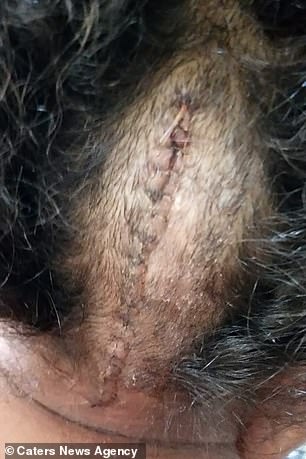 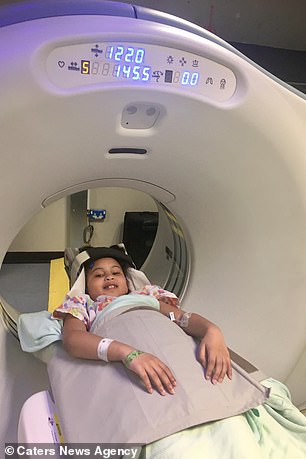 Pictured left is the scar across Roxanne’s head after she went under the knife. The youngster required a full-body scan (seen right) to get to the bottom of what was causing her headaches 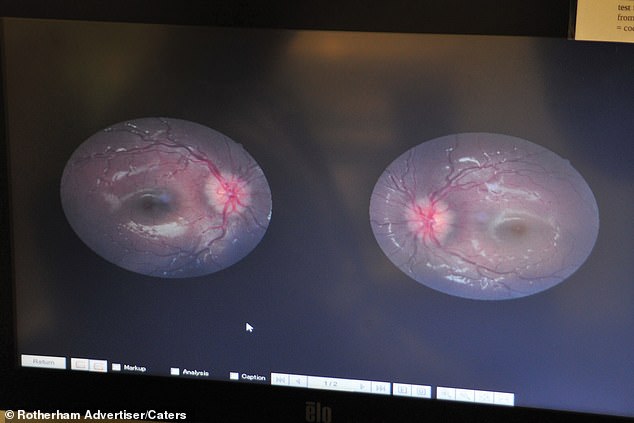 Mr Hussain noticed increased pressure around Roxanne’s optic nerve, which was caused by the tumour. Pictured is a snapshot of the youngster’s inner eye, which led to her diagnosis

Roxanne’s parents claim they ‘can’t thank Saj enough’ for spotting the tumour when he did.

‘It’s so scary to think what could have happened if Saj hadn’t seen it,’ Mrs Knight said.

‘He treated me like his own family, he was just the hero of the day. I can’t thank that man enough.’

Had Mr Hussain not noticed Roxanne’s tumour, things could have taken a dramatic turn for the worse.

‘Roxanne asked me, “mum am I okay to think something bad would have happened if the optician hadn’t seen this?”,’ Mrs Knight said. ‘I had to be honest with her.’

The youngster even insisted on writing the optometrist a card and buying him chocolates.

‘It was evident Roxanne’s case was extremely serious and the family were right in thinking that something was wrong with her,’ he said.

‘It’s testament to the rigour of our training that it helps us identify issues, and the quality of equipment which let us identify problems in more detail than ever before.

‘We’re just delighted we managed to spot this issue for Roxanne early and she’s had a happy ending.’