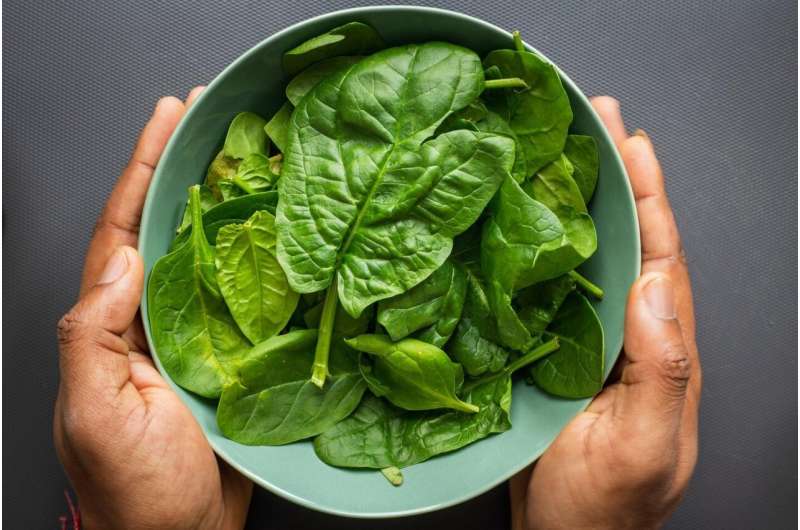 The study, published today in the Journal of Nutrition, found that people who consumed a nitrate-rich diet, predominantly from vegetables, had significantly better muscle function of their lower limb.

Poor muscle function is linked to greater risk of falls and fractures and is considered a key indicator of general health and wellbeing.

Researchers examined data from 3,759 Australians taking part in Melbourne’s Baker Heart and Diabetes Institute AusDiab study over a 12-year period. They found those with the highest regular nitrate consumption had 11 percent stronger lower limb strength than those with the lowest nitrate intake. Up to 4 percent faster walking speeds were also recorded.

“Our study has shown that diets high in nitrate-rich vegetables may bolster your muscle strength independently of any physical activity,” he said.

“Nevertheless, to optimize muscle function we propose that a balanced diet rich in green leafy vegetables in combination with regular exercise, including weight training, is ideal.”

“With around one in three Australians aged over 65 suffering a fall each year, it’s important to find ways of preventing these events and their potentially serious consequences,” said Dr. Sim.

While leafy greens may be some of our least favorite vegetables, they could be the most important, according to Dr. Sim.

The research found nitrate-rich vegetables, such as lettuce, spinach, kale and even beetroot, provided the greatest health benefits.

“Less than one in ten Australians eat the recommended five to six serves of vegetables per day,” Dr. Sim said.

“We should be eating a variety of vegetables every day, with at least one of those serves being leafy greens to gain a range of positive health benefits for the musculoskeletal and cardiovascular system.”

“It’s also better to eat nitrate-rich vegetables as part of a healthy diet rather than taking supplements. Green leafy vegetables provide a whole range of essential vitamins and minerals critical for health.”

The study, a collaboration with Deakin University’s Institute of Physical Activity and Nutrition and the Baker Heart and Diabetes Institute, builds on Dr. Sim’s previous research into nitrate and muscle function in older women.

It also adds to growing evidence linking vegetables with cardiovascular health, including a recent ECU study into cruciferous vegetables and blood vessel health.

Dr. Sim said the next step of his research will be exploring strategies to increase leafy green vegetable consumption in the general population.