One week ago, I sent out two tweets describing my deep concern about patients and their families turning to crowdfunding to cover the costs of surgical treatment.

Together, these tweets triggered a storm of abuse and name calling through social media, email and even telephone calls. 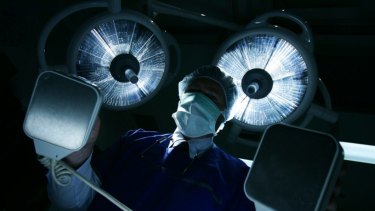 Online, the discussion quickly leaves science, and instead becomes deeply personal and malicious.Credit:AFR

My first tweet read: “Something must be seriously wrong if a terminally ill girl with a brain tumour has to raise $120,000 to have surgery Dr Charlie Teo has offered do for $60-80K. If it was valid surgery, it could/should be performed in the public system under Medicare.”

I had just read an article about the Lucas family who were raising money for urgent surgery with Charlie Teo for their 12-year-old daughter, but it was also disturbing to see increasing crowdfunding to meet the out-of-pocket costs of cancer treatment.

“On a search on GoFundMe for Charlie Teo, there are 113 campaigns listed that mention him as the surgeon for which donations are sought to pay for his services. I find this really disturbing,” read my second tweet.

Before long, the online abuse was deafening, exacerbated by a Northern Beaches Councillor not only sharing my email address on Twitter, but encouraging others to send me emails.

These unpleasantries echo the anti-vaxx movement where discussion quickly leaves science, and instead becomes deeply personal and malicious with the aim of silencing critics.

While this has been a harrowing experience, it has also been a greatly humbling one. I have received a phenomenal number of messages of support, with virtually all of these coming from fellow members of the medical profession.

Many colleagues expressed reluctance to openly express their views due to fear of public backlash as Dr Teo is deemed untouchable and charismatic with powerful media allies. He is also perceived to have a large financial capacity to litigate.

As a urologist, I am not motivated by jealousy. I have dedicated my life to improving outcomes for patients with cancer. I am a Professor of Surgery at the University of Sydney and have reached the pinnacle of my profession. My motivation was to stimulate discussion about a highly emotive subject – fees surrounding cancer care and the place of the public health system.

Dr Teo repeatedly states that he has offered to teach colleagues how to perform his brand of surgery, but nobody is taking up his offer. It is naive to suggest that his colleagues know less than he does. The elephant in the room is whether the surgery is actually valid or not?

Estimating prognosis for terminally ill cancer patients can be challenging. Professor Martin Stockler from the University of Sydney suggests we consider “best”, “typical” and “worst-case” scenarios for survival; this allows patients to “hope for the best”, “prepare for the worst” and to “expect the typical”. If a patient is prepared with an expectation of a “typical case scenario outcome” but a “best-case scenario outcome” is achieved, these patients are often keen to seek attribution for the “better-than-expected outcome”.

In the setting of terminal cancer, “worst-case scenario outcome” patients cannot seek attribution for their unexpected adverse result and their families are often not emotionally or psychologically positioned to advocate on their behalf.

A large crowd of “best-case scenario” supporters citing anecdotal “best-case outcomes” is not evidence of benefit.

If surgeons are performing surgery that does not have clear evidence for outcomes, their data needs to be collected and peer review undertaken. This is what the public expects of professional conduct.

Producing evidence will always win over the staunchest critic. I don’t know if we are seeing this happen. What I do know is that it would be preposterous to suggest that every other neurosurgeon in this country will not adopt Dr Teo’s surgical approach due to jealousy and ego.

For the case of the Lucas family, Dr Teo has stated that he receives $8000 of the $40,000 medical fee and the rest distributed amongst the anesthetist, assistant, radiographer, radiologist and pathologist.

Those familiar with usual levels of remuneration would consider this distribution likely improbable. Dr Teo states the cost of the private hospital care is $80,000 but private hospitals say that it is half this.

I have no doubt that the Lucas family are genuine and honest in their dealing, but when donations are being made to crowdfunding campaigns there needs to be transparency about exactly where these funds are going and who is financially benefiting. This is very much in the public interest.

I care deeply about access to healthcare. My two tweets were an expression of how incomprehensible I find the practice of crowdfunding for life saving, or life prolonging, surgery given that we have a superb, world class, universal health care system called Medicare to look after all Australians, irrespective of their financial position. This is what the conversation needs to be about.

Henry Woo is a urological surgeon and Professor of Surgery at the University of Sydney.