HEALTH NOTES: Surfing the web comes of age in lockdown as study finds it boosts mental health of older people

Surfing the web boosted the mental health of older people during lockdown.

A University of Surrey study found that 55-to 75-year-olds who used the internet once a day or more had much lower levels of depression than those who used it once a week or less.

Researchers who analysed 3,000 participants believe the web allowed older people to stay in touch with family and friends.

But they also found those who used it to search for health-related information reported higher levels of depression. 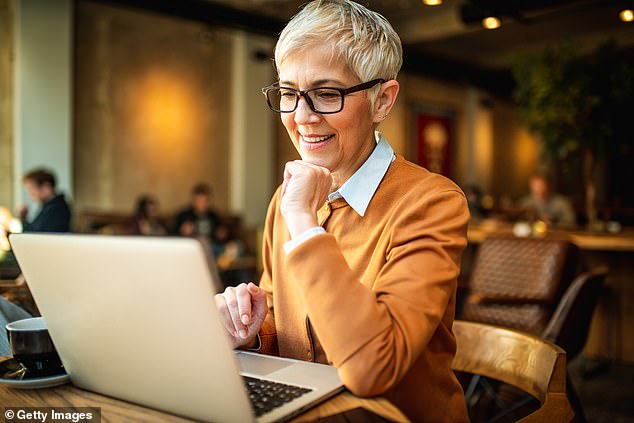 Surfing the web boosted the mental health of older people during lockdown, a study has found

Kidney-failure patients are given dialysis, which removes waste products from the blood. But it can lead to scarring of the heart, which can accumulate over time and lead to heart failure. Only a quarter of kidney failure patients survive for longer than a decade after diagnosis.

Researchers at the University of Leicester found that patients who used specially adapted bicycles during their dialysis sessions boosted blood flow around the heart. As a result, they suffered less scarring.

Professor James Burton, the chief investigator on the study, said: ‘Significant improvements to the heart health of dialysis patients may have a major impact on their outlook.’

Heartburn drugs taken by millions of Britons could make the problem worse, according to a new study by British gut experts.

Researchers found that in two-thirds of patients, proton pump inhibitors (PPIs), the most popular form of heartburn medication, led to increases in gases in the gut that cause the characteristic burning feeling in the chest.

The potent pills reduce the production of stomach acid – but this is key for killing off nasty bacteria in the gut. Over time, gut bugs accumulate, releasing harmful gases that push stomach juices up the food pipe, causing heartburn.

Nick Boyle, consultant gastrointestinal surgeon and study leader, said: ‘There is a perception that these drugs have only benefit and can be taken long term without consequence.’

Brain injuries can cause a stroke even five years after the damage happens, a study found.

A blow to the head can damage the blood vessels that supply the brain. When it does not get a steady supply of oxygenated blood, a stroke can occur.

Researchers at the University of Birmingham concluded that while the risk of a potentially fatal stroke is highest in the four months after an injury, the risk remains high for five years.

Scientists also found that traumatic brain injuries raised the risk of stroke by 85 per cent.