Is the the end of glaucoma? How the world’s tiniest implant which you cannot see with the naked eye can stop you going blind

Little bigger than a grain of sand, this is officially the world’s smallest medical implant. Yet the tiny device is set to transform treatment for tens of thousands in the UK who are at risk of blindness due to glaucoma.

The £900 i-Stent – a hollow metal tube about ten times smaller than a grain of rice – is so minuscule it can only be implanted in the eye using a high-powered microscope.

Once in place, it drains off harmful fluid that accumulates in the eyeball and which puts pressure on the optic nerve, potentially causing irreversible vision loss. 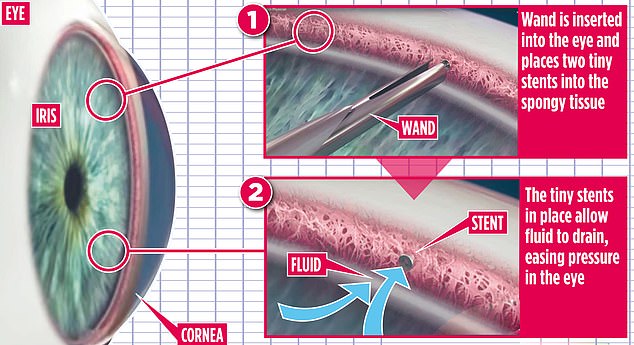 The £900 i-stent can be inserted into the eye,allowing harmful fluid to drain off 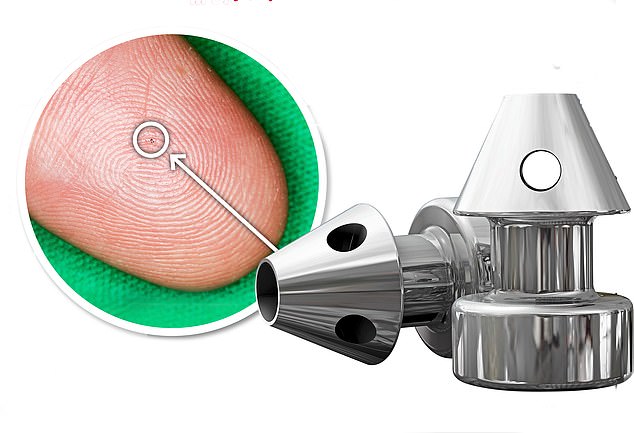 Hundreds of patients have already benefited from the implant, which takes less than 30 minutes to fit. Many people have since been able to discard the drops they took up to three times a day to keep their condition under control.

Thousands more could now be in line for the microscopic implants after the devices were approved by the NHS spending watchdog, the National Institute for Health and Care Excellence (NICE).

Eye surgeons are hopeful the procedure could revolutionise glaucoma treatment. ‘It’s early days but so far we have been getting very good results,’ says consultant ophthalmologist and glaucoma specialist Madhu Nagar, who has pioneered use of the i-Stent at Mid Yorks Hospitals NHS Trust. ‘I have done about 100 cases and between 60 and 70 per cent have seen a significant drop in pressure.’

Glaucoma affects at least 600,000 people in the UK and is responsible for more than ten per cent of blindness cases. One person in 50 over the age of 40 has early signs of the condition, although the vast majority go undetected at this stage. That figure rises to one in ten of those aged over 75. The number of people affected is expected to increase in the next few years due to an ageing population.

In a healthy eye, fluids packed with important nutrients flow through the eye to ‘feed’ the various structures within, and then drain away naturally. In glaucoma sufferers, the drainage channels become blocked and the fluid gradually accumulates, pressing on the optic nerve. It leads first to tunnel vision, then total blindness.

It can be inherited but is also triggered by injuries to the eye or inflammation. Ageing is also a major risk factor. Regular checks are crucial to detect it, and patients are usually given drops to help excess fluid drain away, or, in more severe cases, laser surgery to increase the drainage of fluid. But many patients often forget to put their drops in at the right time, or put too little in. Missing drops regularly, or even just delaying them, can increase the risk of glaucoma getting worse.

Meanwhile, laser surgery is a fairly complex procedure not always suitable for patients, so the i-Stent could provide a simple and permanent solution.

It is normally carried out at the same time as patients have cataract surgery. Once doctors have anaesthetised the area, they make a tiny incision in one corner of the eye. Using an ultra-thin needle, they then inject a miniature stent into the Schlemm’s canal – a tiny draining channel in the front of the eyeball. The process is repeated on the other side of the eye.

The implants are made from titanium, which is not rejected by the body’s defences. They remain in place permanently and are so small that patients are unable to feel them in their eyes. Ms Nagar says although the implant is not guaranteed to work, success rates so far are fairly impressive. ‘Some patients never need drops again, and others can significantly reduce the amount they need,’ she adds.

Retired engineer Ronald Bretherton, from Wakefield, was one of the first glaucoma patients in the UK to receive the miniature stent.

Doctors had warned Ronald, 88, his glaucoma was no longer responding to drops to reduce intraocular pressure. He says: ‘I was diagnosed with glaucoma nearly 20 years ago and had been putting in drops twice a day.

‘But when doctors said my pressure readings were rising and the drops were no longer working, I knew there was a risk I could go blind.

‘It was worrying, not least because I cannot walk far these days and need to drive to get around.’

Ronald had an operation on one eye in February 2018 at Pontefract Hospital at the same time as cataract surgery, and the other a few months later. ‘They froze the eye and injected a stent in each corner,’ he says. ‘I didn’t feel a thing – it’s far worse going to the dentist.’

Checks have revealed the pressure in his eyes has stabilised. His glaucoma is no longer progressing and he is still able to drive. ‘I needed eye drops for a couple of weeks until the stents were working fully but I’ve not taken any since,’ he says. ‘In fact, I’ve now thrown them away – hopefully for good.’