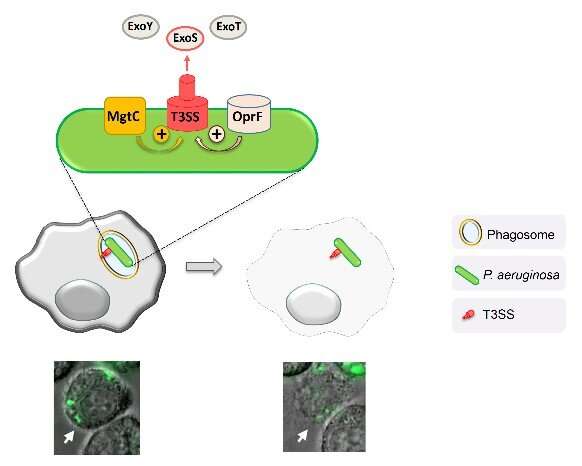 A bacterial pathogen that typically multiplies outside of host cells can enter and induce the destruction of cells called macrophages, according to a study published June 20 in the open-access journal PLOS Pathogens by Anne-Béatrice Blanc-Potard of the Université de Montpellier in France, and colleagues.

In the new study, Blanc-Potard and her colleagues visualized the fate of P. aeruginosa within macrophages. P. aeruginosa first resided in vesicles called phagosomes and subsequently could be detected in the cytoplasm, indicating that the pathogen had escaped degradation within the phagosomes. The intracellular bacteria could eventually induce cell lysis—the disintegration of a cell through membrane rupture. Two bacterial molecules, MgtC and OprF, recently identified to be important for the survival of P. aeruginosa in macrophages, were found to activate intracellular production of type III secretion system (T3SS), which in turn was found to be involved in bacterial escape from the phagosome as well as in cell lysis caused by the bacteria. According to the authors, the transient stage in which P. aeruginosa resides inside of macrophages could contribute to bacterial dissemination during infection.