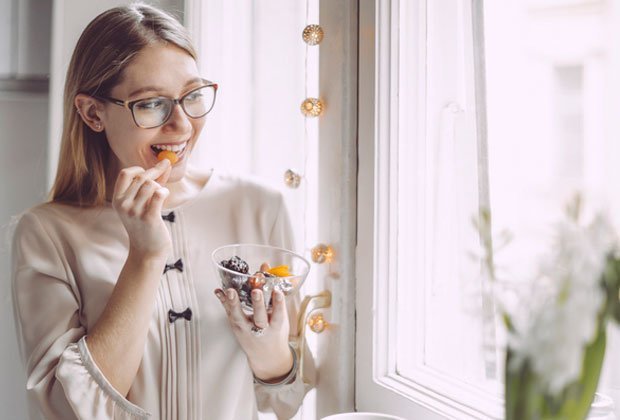 There’s plenty of ways to lose weight fast, but a good starting point is to obviously cut out those unhealthy snacks.

However, the problem isn’t necessarily the fact people are snacking, but rather that as a nation we’re snacking on completely the wrong food.

In fact, new research suggests that 81% of Brits snack every day, but rarely on fruit or veg.

Unsurprisingly crisps, chocolate and biscuits were top of the list of the nations favourite nibbles to reach for when they’re hungry.

Just to prove the point, it was also revealed that 2.6m (4%) of Brits devoured over 10 Easter eggs during the Easter bank holiday weekend!

Instead, you could (and probably should) be eating some of these healthy snacks under 100 calories or even these seven protein snacks to help you lose weight and build muscle.

Alternatively, you know you could also try dried fruit? Which funnily enough, a lot of people are overlooking completely for all the wrong reasons.

Whilst many of us will be familiar with the old adage ‘an apple a day’, new research by the Dried Fruit Alliance found that those surveyed didn’t actually recognise the health benefits of traditional dried fruit.

Alarmingly they also revealed a number of common misconceptions about the health benefits of traditional dried fruit.

For instance, a quarter of Brits (26%) believed that dried fruit does not have similar nutritional value when compared to fresh fruit.

Although the truth is that dried fruit is just as healthy and packed with the same nutrients needed for a healthy diet.

On top of this, the research revealed a third of shoppers believe dried fruit is higher in sugar than fresh fruit, but again, this isn’t the case.

In response, healthcare professionals reviewing the evidence on dried fruit and public health have supported a role for dried fruit in a healthy diet.

“With our snack consumption on the rise and 96% of Brits not eating their recommended five-a-day, there is a growing need to inspire the nation on how to make small changes to their diets in order maintain a healthy lifestyle,” argues Simon Melik, Chairman of the National Dried Fruit Trade Association.

“Substituting unhealthy snacks for healthier alternatives such as fresh or dried fruit is a great way to do this, but despite a lack of supporting evidence, there is still a number of common misconceptions around dried fruit as a healthy snack option,” continued Melik.

“Since dried fruit is a nutritious, high fibre food, people could switch from traditional snacks, to make a healthier choice.

“A recent report in the International Journal of Food Sciences and Nutrition around dried fruit and public health includes a review of the dental health evidence and the paper concludes that there is limited medical evidence to support the effect of dried fruit and the health of your teeth.

“The report also highlights that 30g of dried fruit qualifies as one of your five-a-day.”

So there you have it. If you want to take your weight loss journey seriously, consider fitting more dried fruit into your daily diet.