Travellers on indirect flights from China will be forced to take Covid tests before departing from tomorrow, Government officials have confirmed.

No10 is bringing back travel restrictions for passengers from the Chinese mainland — apart from Hong Kong — amid a surge in cases that is blighting the nation.

Concerns had been raised people flying from the country could avoid a pre-departure test via a ‘loophole’ allowing them to board a flight to another nation first.

But in an update to restrictions issued last night, the Government said transiting passengers will not be exempt from the rules. 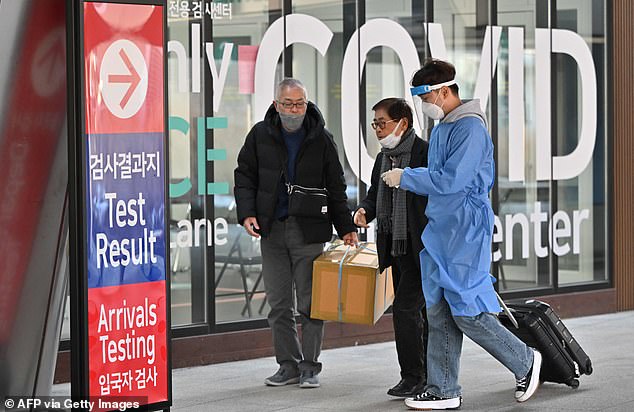 Travellers on indirect flights from China will be forced to take Covid tests before departing from tomorrow, UK Government officials have confirmed. Pictured: A health worker guides travellers arriving from China in front of a Covid-19 testing centre at Incheon International Airport in South Korea yesterday 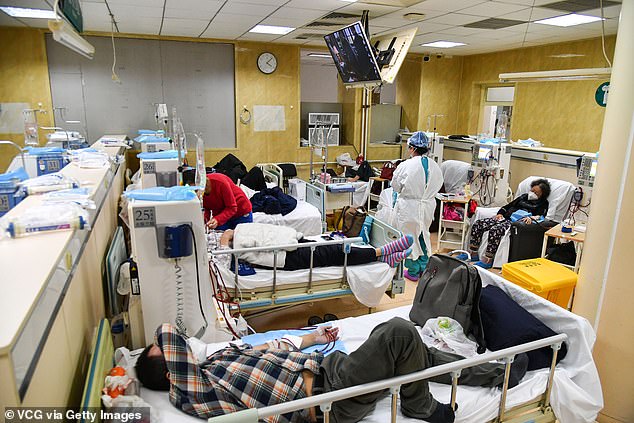 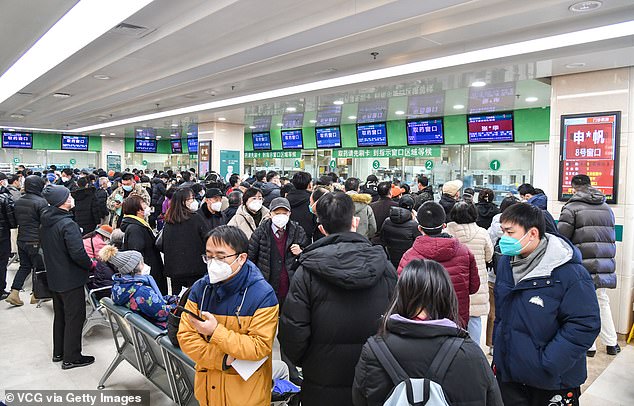 Should passengers test positive before flying, they will not be allowed to travel.

The joint statement from the Department for Transport and Department of Health and Social Care read: ‘From January 5, 2023, there are different rules if you travel to England from mainland China.

‘You will need to take a Covid test no more than two days before you travel.

‘Children aged 11 and under do not have to take a Covid test before travelling to England from mainland China.

‘This applies to all direct and indirect flights originating from mainland China.

‘An indirect flight involves stops in one or more other countries or territories before arriving in England. This includes if you are travelling through Hong Kong or Macao.’

The update also said voluntary tests on arrival to track for new variants will not start until January 8.

Ministers have said they plan to test a ‘sample’ of passengers on arrival in the UK to check for dangerous strains — such as XBB.1.5, which has been nicknamed ‘the Kraken’.

But passengers arriving in Britain will not be forced to take the tests, which are only available at London Heathrow — one of two airports direct flights from China arrive at, alongside Manchester.

And even if passengers do take them and test positive, they will not have to self-isolate, the Transport Secretary admitted yesterday.

The new travel restrictions were first announced on December 30 because of fears China’s outbreak could introduce a deadly strain in the UK.

Other countries — including the US, Canada, Italy, Japan, India, Spain, South Korea, Malaysia and France — all brought in similar measures to deal with the threat of potential doomsday variants.

Covid is currently overwhelming hospitals in China after cases surged in the country when Beijing’s controversial ‘zero-Covid’ policy was lifted last month.

But they also fear the latest wave — which is thought to be causing more cases than ever in the country — could spawn the perfect breeding ground for a new variant. 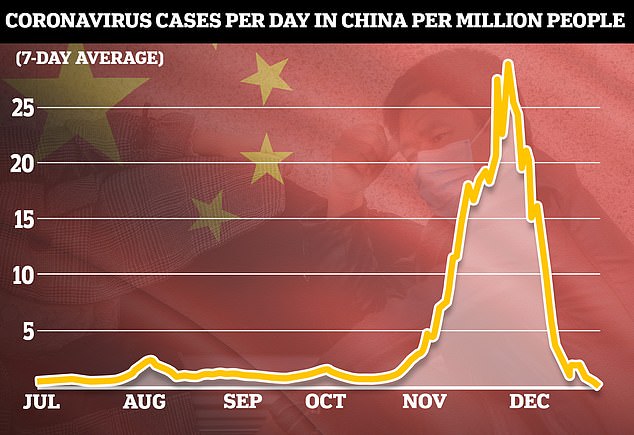 The Our World in Data graph shows the daily confirmed Covid cases in China. The Chinese Center for Disease Control and Prevention last week stopped reporting daily cases, without providing a reason. It reported around 5,000 cases per day last week and a small number of deaths. However, some estimates suggest China is actually experiencing one million cases per day and 5,000 deaths 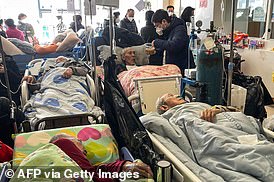 Chinese officials have admitted that the country’s total number of Covid-related deaths is ‘huge’. Pictured: Patients on stretchers at Tongren hospital in Shanghai

China has also been accused of under-reporting its cases and withholding virus samples, reducing the likelihood of any new variant being spotted.

XBB.1.5 has already caused alarm in the US over its quick spread and a recent rise in hospital admissions. It is behind four in ten cases in the country, up from two a week ago.

The variant, which is a version of Omicron, has mutations that help it dodge protection from vaccination and prior infections.

It has been spotted in Shanghai but it is not clear yet how dominant it might be in the country because of low testing.

In a separate bid to track any new variants, hospitals in Britain are being asked to identify and test Covid patients who arrived from China in the last fortnight.

Health chiefs have written to trusts asking them to take the ‘precautionary measure’ so it can ‘undertake enhanced surveillance’ on the variants circulating in China.

In a letter signed by NHS England’s national medical director Professor Sir Stephen Powis, deputy chief medical officer Dr Thomas Waite and Professor Susan Hopkins, chief medical advisor with the UK Health Security Agency, they warn China is in the midst of its ‘most serious Covid-19 wave since the start of the pandemic.’

They said the limited evidence coming from China suggests the new wave is due to Omicron sub-variants, which have been widely detected in other countries including the UK.

But they are wary a new variant could surface, with the more Covid circulating, the greater the risk of the virus mutating.

In the ‘urgent public health message’ sent by the UK Health Security Agency to NHS staff yesterday, they wrote: ‘If new sub-lineages or variants emerged which evaded the immune response of highly vaccinated individuals, they could pose a threat if they were successful enough to outcompete other variants and spread internationally.

‘As a precautionary measure, we are therefore requesting your assistance in the coming weeks to identify any Covid-19 hospitalised cases who have arrived from China in the preceding 14 days for sequencing.

‘This will allow us to undertake enhanced surveillance on the variants circulating in China.’ 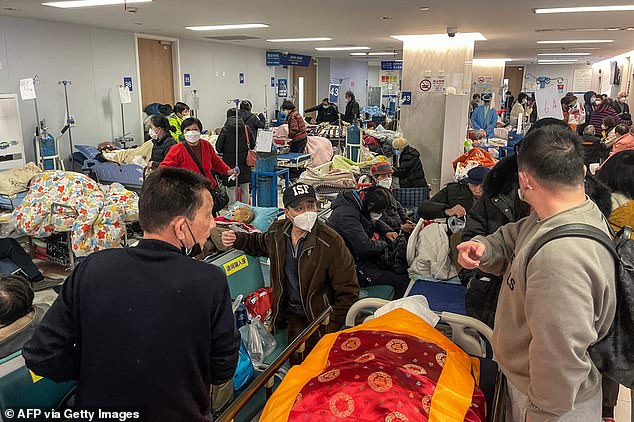 Tongren hospital in Shanghai, pictured, has been overwhelmed by patients after Beijing’s ‘zero-Covid’ hardline approach was abruptly loosened last month

Which, if any, Covid-era measures should return? Vote here and tell us why… 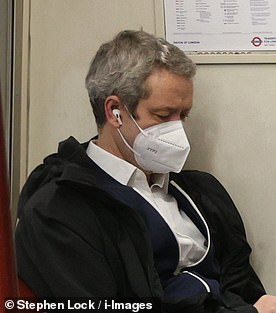 Pictured: People wearing face masks on the London Underground on January 4 after new advice has been given to curb rising infections as flu and Covid number increase

Experts believe that at least 18million Chinese were infected with Covid in December, causing 100,000 deaths.

However, health officials have shut down testing sites and have reported only a few thousand cases.

One doctor said as many as 70 percent of Shanghai’s 25 million residents may have been infected.

However, state media in China played down the severity of infections to its own residents on the same day.

The People’s Daily, the Communist Party’s official newspaper, cited Chinese experts as saying the illness caused by the virus was relatively mild for most people.

‘Severe and critical illnesses account for 3 per cent to 4 per cent of infected patients currently admitted to designated hospitals in Beijing,’ Tong Zhaohui, vice president of the Beijing Chaoyang Hospital, told the newspaper.

Kang Yan, head of West China Tianfu Hospital of Sichuan University, said that in the past three weeks 46 patients had been admitted to intensive care units, representing about 1 per cent of symptomatic infections.

But the World Health Organization invited Chinese scientists to present detailed data on viral sequencing at a technical advisory group meeting on the same day.

The global body asked China to share data on hospitalizations, deaths and vaccinations.

A spokesperson said the agency expected a ‘detailed discussion’ about circulating variants in the country, and globally.

‘We are willing to improve communication with the world,’ foreign ministry spokeswoman Mao Ning told reporters in Beijing.

‘But […] we are firmly opposed to attempts to manipulate the epidemic prevention and control measures for political purposes.’

While travel to the UK from China is currently low, it is likely to increase once quarantine requirements on return to China are removed, they said.

Healthcare professionals are being asked to collect samples of patients who have travelled back from China in the last 14 days.

NHS labs should identify swabs from these patients, then send them to UKHSA labs for expedited genome sequencing to identify strains.