Could this lead to a ‘flab jab’? Experts discover a protein which triggers fat burning in the body and ‘could banish the belly even WITHOUT exercise’

Turkey, chocolate and cheese will have most people feeling full around the middle this week.

But scientists may have found a way to burn off your belly without lifting a finger in future – using only an injection.

Researchers discovered a protein which is naturally boosted during a workout and may be a trigger for the fat burning process.

And they now hope to try injecting the protein – named interleukin-6 – to see if it can burn off flab without any exercise at all. 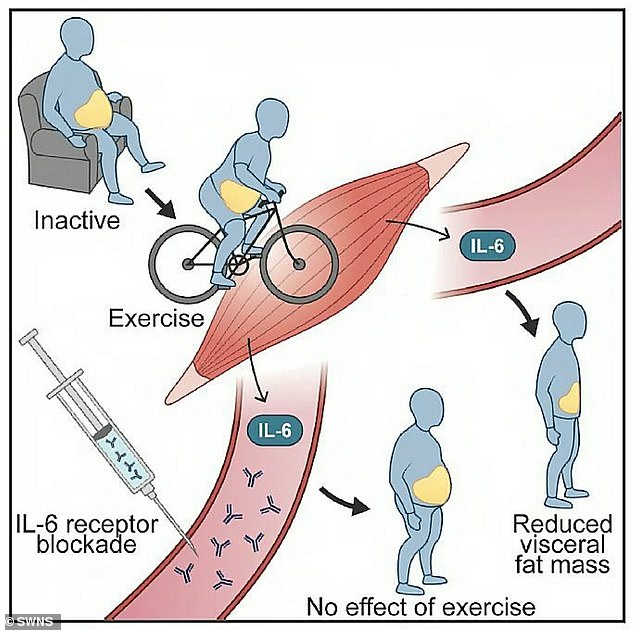 Researchers compared the effects of exercise between people who were given interleukin-6 blockers and those who weren’t. They found people without the drugs lost eight per cent of the fat around their organs, whereas those taking the protein-blocker gained fat instead

Scientists from the University of Copenhagen in Denmark said interleukin-6 is a ‘signalling molecule’, which helps the body’s cells to communicate.

It is thought to be what tells the body to start burning energy stored in fat when someone is exercising.

When study participants took a medicine to stop the action of interleukin-6, it stopped their bodies burning belly fat during exercise.

So the researchers suggested injecting the molecule to raise levels of it – the effect working out has – could trigger fat burning, even if someone is sitting on the sofa.

‘We need a more in-depth understanding of this role of interleukin-6,’ said study author and PhD student Anne-Sophie Wedell-Neergaard.

The fat studied by Ms Wedell-Neergaard and her team was visceral fat – that which builds up around the internal organs and can trigger disease.

People taking the interleukin-6 blocking drug ended up with higher cholesterol, suggesting the protein could also be used for people with high cholesterol levels.

But the researchers said their discovery was no excuse for people to sit around waiting for a miracle jab, and urged people to be active.

‘The take home for the general audience is “do exercise”,’ Ms Wedell-Neergaard said. 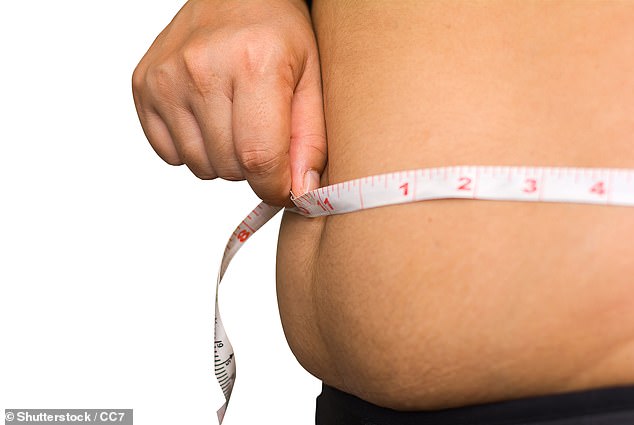 Scientists have found a protein which, they believe, might be able to trigger the body’s fat burning process when it is injected, even if the person isn’t doing any exercise

WHAT IS THE GLOBAL OBESITY CRISIS?

Almost a quarter of the world’s population will be obese in less than 30 years, according to research published in May.

If obesity trends continue, 22 per cent of people around the world will be severely overweight by 2045, up from 14 per cent last year, a study found.

One in eight people, rather than today’s one in 11, are also expected to develop type 2 diabetes, the research adds.

Lead author Dr Alan Moses, from the Denmark-based pharmaceutical company Novo Nordisk, said: ‘These numbers underline the staggering challenge the world will face in the future in terms of numbers of people who are obese, or have type 2 diabetes, or both.

‘As well as the medical challenges these people will face, the costs to countries’ health systems will be enormous.’

People with type 2 diabetes have an average life expectancy of just 55 due to them being at a much higher risk of heart attacks, stroke and kidney disease.

Tam Fry, a health campaigner from the National Obesity Forum said the findings were ‘desperately sad’.

The scientists suspected interleukin-6 was involved in losing fat because it regulates energy metabolism.

It also stimulates the breakdown of fats in healthy people, and is released from skeletal muscle during exercise.

But unhealthy people – such as those with severe obesity, type 2 diabetes and heart disease – also have naturally higher levels of interleukin-6.

And it is believed to be a trigger of painful swelling in people with rheumatoid arthritis, suggesting it has negative effects on the body as well as fat loss.

‘So interleukin-6 may act differently in healthy and diseased people.’

In the 53-person study, the researchers compared the effects of exercise between people who were given interleukin-6 blockers and those who weren’t.

They found people without the drugs lost eight per cent of the fat around their organs, whereas those taking the protein-blocker gained fat instead.

The researchers want to, in future, test if interleukin-6 decides whether the body burns fat or carbohydrates for energy.

The study was published in the journal Cell Metabolism.