It’s not just what you eat, but WHEN you eat that matters: Researchers discover how late night meals throw our body clock out of sync

The time you eat is just as important as the contents of your plate, new research shows.

Scientists at the University of Manchester studied cultured cells and mice to analyze how the internal body clock (or, circadian rhythm) affects metabolism and digestion.

They found that when we eat and the body releases insulin, it has an impact on the body’s clock and how all of our cells work together.

Eating at the ‘wrong’ biological time – i.e., late at night – threw off that rhythm, triggering a release of insulin that stimulated proteins at times when they don’t need to be active.

The results add weight to a growing body of research showing that our body clocks could play a significant role in the risk of developing diabetes, obesity, metabolic disorders, or heart problems. 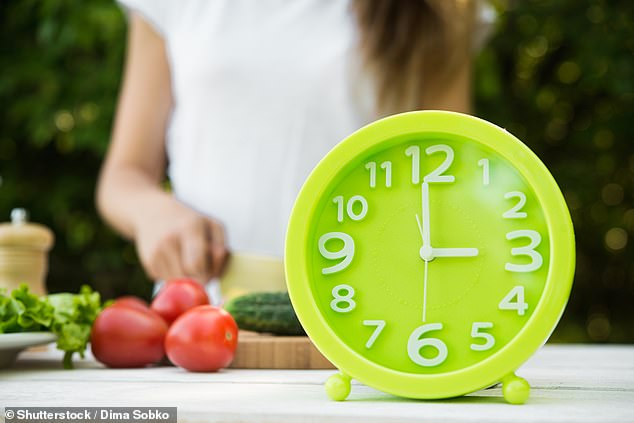 Now that we have electricity that allows us to be active and productive round-the-clock, we can flout that rhythm. But our bodies work best in sync with the sun

‘We already know that modern society poses many challenges to our health and well-being – things that are viewed as commonplace, such as shift-work, sleep deprivation, and jet lag, disrupt our body clock,’ Dr David Bechtold, a senior lecturer at the university who worked on the study, said.

‘It is now becoming clear that circadian disruption is increasing the incidence and severity of many diseases, including cardiovascular disease and type 2 diabetes.’

All life – plants, fungi, animals, humans – has evolved to be in sync with the sun.

Now that we have electricity that allows us to be active and productive round-the-clock, we can flout that rhythm.

But our bodies work best in sync with everything else.

In a healthy person, levels of cortisol (the stress hormone) peak at around 8am, giving us a rush of energy to wake us up (in theory). Those levels drop to their lowest at 3am the next day, before rising back to its peak five hours later at 8am again.

Ideally, this 8am peak will be triggered by exposure to sunlight, if not an alarm. When it does, the adrenal glands and brain will start pumping adrenalin.

By mid-morning, the cortisol levels start dropping, while the adrenalin (for energy) and serotonin (a mood stabilizer) keep pumping.

At midday, metabolism and core body temperature ramp up, getting us hungry and ready to eat.

After noon, cortisol levels start their steady decline. Metabolism slows down and tiredness sets in. Gradually the serotonin turns into melatonin, which induces sleepiness. Our blood sugar levels decrease, and at 3am, when we are in the middle of our sleep, cortisol levels hit a 24-hour low.

Disrupting that rhythm disrupts the delicate balance of hormones and sugar levels in our body – and it starts to show on your skin, in your digestion, in your stress levels.

It’s been a boon for bogus supplement, serum and ‘wellness’ brands, which market their products as a silver bullet for balancing your system.

But a growing swell of research – including the 2017 Nobel Prize winner for Medicine – shows that going with the flow could be a far easier, far more effective, and less costly fix.

Dr Michael Crupain, MD, MPH, a board-certified preventive medicine physician who consults on The Dr Oz Show, has written a book on this very topic.

His research shows eating with the sun makes or bodies work more efficiently.

‘Eat with the sun, that’s what sets your circadian rhythm, which is your body’s clock, to get your body ready to run more efficiently,’ Dr Crupain told DailyMail.com.

‘Our body in the morning wants to process carbs, and at night you’re kind of throwing a wrench in the works if you start eating. You start storing food rather than using it for energy.’

Dr Crupain, who now eats breakfast around 8am, did not always follow this lifestyle.

In fact, until he started writing this book a few years ago, he was in the habit of eating big dinners, and skipping breakfast altogether – something a recent study found to be dangerous, raising the risk of heart disease.

‘I started off training to be a neurosurgeon and I was on the night float so it just became easy to have that meal,’ he explains. 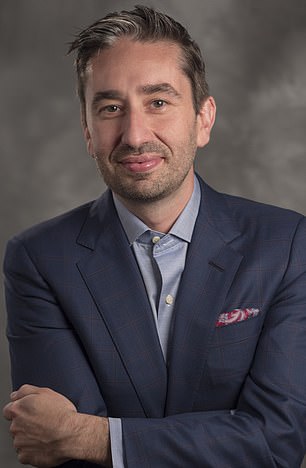 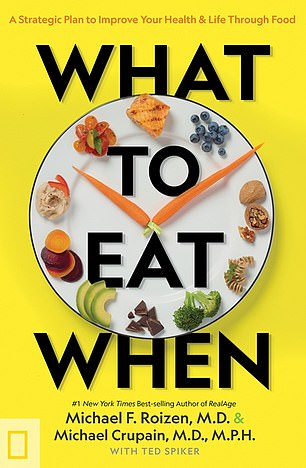 Dr Michael Crupain, MD, MPH, a board-certified preventive medicine physician who consults on The Dr Oz Show, has written a book (right) on this very topic. His research shows eating with the sun makes or bodies work more efficiently

‘I just got into that habit and it worked for me. And then I started doing the research for this book.’

Switching over, he says, was ‘shockingly easy’. It took him about a month – as he now recommends to his readers, with a 31-day plan that closely mimics what he went through to shift over.

‘I started to take that dinner and save a little bit for the next day,’ Dr Crupain, who is partial to cold pasta for breakfast (‘your body digests cold carbs better than hot’), explained.

Every day he would save another eighth of that big bowl of pasta for the next morning, until eventually he had a large breakfast, and a very small dinner.

‘You should get about 75 percent of your calories before 3 o’clock,’ he says.

As for people working the night shift, Dr Crupain says he understands how difficult it can be. It’s difficult to recommend an eating plan when, really, we shouldn’t be awake then.

But he says the best thing you can do is to plan your meals and snacks to avoid the inevitable vending machine dinner or pizza slice at 3am.

‘It’s easy at night to eat things that aren’t good for you. Working the night shift you have to plan a little more than other people would. Have your largest meal before you go to work and pick some healthy snacks to have during the shift, then have a light meal when you get home.’