January diets are a ‘marketing ploy’ and are ‘destined to FAIL’ because the human brain is hard-wired to resist change, claims neuroscientist

Dieting is one of the most common New Year’s resolutions.

But a leading neuroscientist has slammed the entire concept of January diets, insisting they are merely a ‘marketing ploy’.

Dr Jason McKeown, a visiting scholar at the University of California, San Diego, claimed all attempts are ‘destined to fail’.

He warned cutting back on calories – as millions do in desperation of shedding the Christmas bulge – is a particularly unsuccessful method. 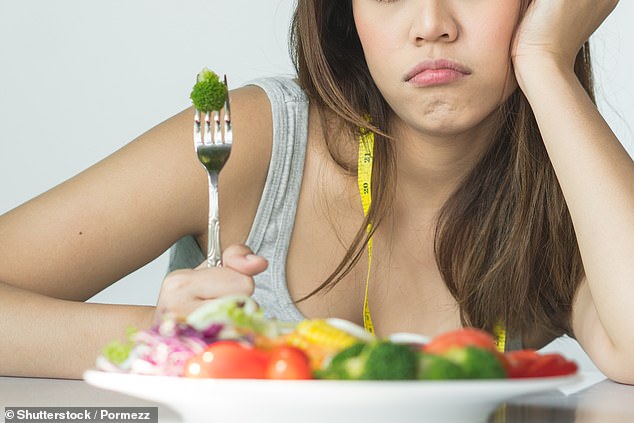 Dieting is one of the most common New Year’s resolutions. But a leading neuroscientist has slammed the entire concept of January diets, insisting they are merely a ‘marketing ploy’

Dr McKeown told MailOnline: ‘This is likely going to make you so unhappy and hungry that you’ll give up and quickly regain the weight.’

He added: ‘Diets in January can often end up being more of a marketing ploy than a success, they are destined to fail – even for the strongest of minds.

‘The human brain is well known to be very resistant to change, and unfortunately that includes your sudden January diet.’

However, he did say there is a way around the ‘catch-22 situation’ – through activating the areas of the brain responsible for appetite and cravings.

HOW MANY CALORIES DO I NEED EACH DAY?

The basic amount of calories an average adult needs per day is 2,000kcal for women or 2,500kcal for men.

This is based on the amount of energy the body needs to carry out basic functions and to walk and work throughout the day.

People who exercise a lot need to eat more calories to fuel their efforts, and young people and children burn more energy, too.

If you eat more calories than you burn in a day, you will get fatter.

Eating fewer calories than you burn will make you lose weight.

Foods which are processed and have high levels of carbohydrate, sugar and salt have higher calorie numbers than fresh fruit and vegetables.

Dr McKeown said: ‘When this is done, losing-weight is totally transformed and becomes something which people find a lot easier to do.’

The 31-year-old has a medical degree from Queen’s University, Belfast.

He made the claims on the back of a survey of 2,000 people conducted by his company on the nation’s thoughts on January diets as a whole.

The poll by Neurovalens – behind a device that claims to help people lose weight – found around a quarter of the UK made plans to diet during the first month of 2019.

And it also revealed that nearly three quarters of respondents put on weight during previous January attempts to scale back on food.

Dr McKeown became the youngest ever visiting scholar to be invited to study under a leading neuroscientist in the US five years ago.

He received the invite from Professor Vilayanur Subramanian Ramachandran – considered to be one of the most influential people in the world.

Modius, the gadget owned by Neurovalens, stimulates part of the brain that controls fat storage, called the hypothalamus.

It does this by sending low-level electrical pulses to the vestibular nerve, located close to the skin’s surface behind the ear.

The stimulation is interpreted by the brain as the body being more physically active, triggering the hypothalamus to reduce fat storage.