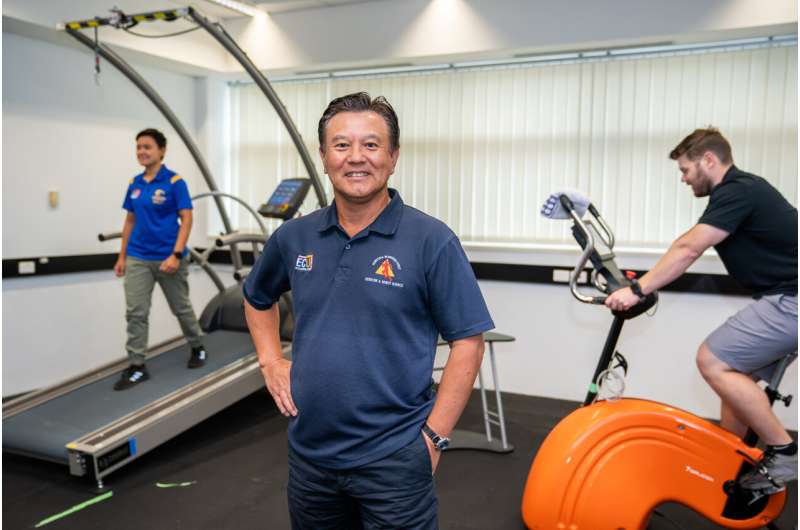 Good news for those who struggle to fit a gym workout into their day: you may be able to cut your weights routine in half and still see the same results.

New research from Edith Cowan University (ECU) has shown one type of muscle contraction is most effective at increasing muscle strength and muscle size—and rather than lifting weights, the emphasis should be on lowering them.

The team, which also included researchers from Niigata University and Nishi Kyushu University in Japan and Brazil’s Londrina State University, had groups of people perform three different types of dumbbell curl exercise and measured the results.

It found those who only lowered a weight saw the same improvements as those who raised and lowered weights—despite only performing half the number of repetitions.

ECU’s Professor Ken Nosaka said the results reinforced previous research indicating a focus on “eccentric” muscle contractions—in which activated muscles are lengthened—is more important to increasing strength and size of muscles, rather than the volume.

“This latest study shows we can be far more efficient in the time we spend exercising and still see significant results by focusing on eccentric muscle contractions.

“In the case of a dumbbell curl, many people may believe the lifting action provides the most benefit, or at least some benefit, but we found concentric muscle contractions contributed little to the training effects.”

The study consisted of three groups who performed dumbbell curls twice a week for five weeks, plus a control group who did nothing.

All three saw improvements in concentric strength, but this was the only improvement for the concentric-only group.

“With the small amount of daily exercise needed to see results, people don’t necessarily even have to go to the gym—they can incorporate eccentric exercise into their everyday routine.”

Putting it into practice

So how can we put this knowledge to use in the gym?

Using a dumbbell, Professor Nosaka recommends using two hands to help with the concentric (lifting weight) phase, before using one arm for the eccentric phase (lowering weight), when performing:

Happily, Professor Nosaka says you don’t need gym weights to apply the same principles to a workout and has come up with several simple exercises one can do at home.

In the exercises, feel that the contracting muscles are gradually stretched from the start to the end of the range of motion.

Repeat 10 times for each exercise.

Chair sit: From a half-squatting position, sit down slowly on a chair in three seconds, (narrower and wider stances will create different effects). If this is easy, try to sit down with one leg.

Chair recline: Sit on the front of a chair to make a space between your back and the backrest, recline back slowly in three seconds (arms can be crossed at the chest or hold at the back of a head).

Uneven squat: Stand behind a chair, lean to one side to put more weight on one leg, then squat down in three seconds.

Heel down: Still behind a chair, lean forward and raise your heels. Then, lift one leg off the ground and lower the heel of the other leg in three seconds.

Wall kiss: Lean against a wall with both arms fully extended. Bend the elbow joint slowly over three seconds until your face gets close to the wall.

Front lunge: Place one leg in front of the other and bend the knees deeper over three seconds.

“Comparison between concentric-only, eccentric-only and concentric-eccentric resistance training of the elbow flexors for their effects on muscle strength and hypertrophy” was published in the European Journal of Applied Physiology.