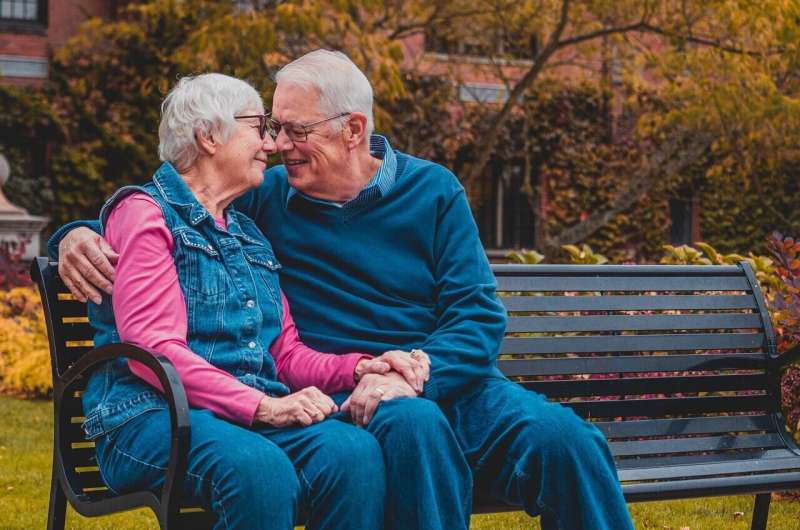 Men have a high probability of outliving women—especially those who are married and have a degree—reveals a statistical analysis spanning 200 years across all continents of the globe and published in the open access journal BMJ Open.

Between 25% and 50% of men have outlived women, challenging the received wisdom that men simply don’t live as long as women, say the researchers, who point out that sometimes large differences in life expectancy mask substantial overlap in lifespan between the sexes.

The female survival advantage has been observed over time across many different populations. But sex differences in survival are often identified by comparing life expectancy, which summarizes the average length of life, rather than years lived, and this has been interpreted as “men do not live as long as women,” explain the researchers.

They wanted to quantify the probability that males outlive females over time and across populations; and to explore the impact of changes in life expectancy and variations in lifespan between the sexes.

They used a particular statistical approach—the “outsurvival” statistic—-to study sex differences in deaths in 199 populations from every continent over a period of 200 years.

The researchers drew on life tables by sex and individual years for 41 countries from the Human Mortality Database, plus separate data for East and West Germany, and for the 4 countries of the UK.

They also used abridged life tables from the World Population Prospects 2019. This provides sex-specific life tables for 199 countries by 5-year age groups and 5-year periods from 1950–54 to 2015–19.

Finally, they compared the probability of men outliving women by education level and marital status, using national US statistics on deaths and population counts.

The data analysis showed that since 1850 the probability of males outliving females has, at all points in time and across all populations, varied between 25% and 50%, with only a few values above 50% in different countries at different times.

In other words, the data show that between 1 and 2 (25%-50%) out of every 4 men have outlived women for the past 200 years, challenging the received wisdom that men simply don’t live as long as women, say the researchers.

In developed countries, the probability of males outliving females fell until the 1970s, after which it gradually increased in all populations. The rise and fall in sex differences in life expectancy were mainly attributed to smoking and other behavioral differences.

The probability of males living longer than females is generally higher in low- and middle-income countries, but this doesn’t necessarily mean greater gender equality in survival, note the researchers.

They highlight South Asian countries, where values were above 50% for men in the 1950s and 1960s. The death rate for children under 5 in India was higher for girls than for boys and has remained higher for girls in recent years.

But fewer girls than boys above the age of 15 have died since the 1980s, “balancing out” the disadvantage at younger ages, they explain.

Certain external factors seem to have a key role. For example, between 2015 and 2019, the probability of males outliving females was 40% across the entire US population.

What’s more, married men with a degree have an advantage over unmarried women educated only to high school level. Couples influence each other’s health, and this is particularly true for men, who benefit more than women from being in a stable relationship, point out the researchers.

“A blind interpretation of life expectancy differences can sometimes lead to a distorted perception of the actual inequalities [in lifespan],” they write.

“Not all females outlive males, even if a majority do. But the minority that do not is not small. For example, a sex difference in life expectancy at birth of 10 years can be associated with a probability of males outliving females as high as 40%, indicating that 40% of males have a longer lifespan than that of a randomly paired female,” they explain.

“Not all males have a disadvantage of 10 years, which is overlooked by solely making comparisons of life expectancy. However, a small number of males will live very short lives to result in that difference. For example, more baby boys die than baby girls in most countries,” they add.

The data nevertheless show that the death rate has fallen faster for women, overall, than for men under the age of 50, especially in the first half of the 20th century, largely as a result of improvements in infant and child deaths.

And men have not only maintained their survival disadvantage at younger ages, but at older ages too. They are more prone to accidents and homicides in their 20s and 30s, and they tend to smoke and drink more, leading to higher cancer prevalence and death in their 60s.