How the menopause might ruin your MARRIAGE: Seven in ten women with marital difficulties say going through ‘the change’ put extra strain on their relationship, finds poll

Hot flushes, mood swings and reduced libido may not only be classic symptoms of the menopause.

But a divorce might be another, a poll suggests.

Seven out of 10 women with marital difficulties — such as being divorced or going through a separation — blamed going through ‘the change’ for their love woes.

Some claimed their situation triggered more arguments and even left them victims of domestic abuse.

The respondents did not detail why they thought menopause had such a negative effect on their marriage.

But common symptoms of the condition, like mood swings, reduced sex drive, and increased irritability from a lack of sleep could partly be to blame for putting relationships under duress. 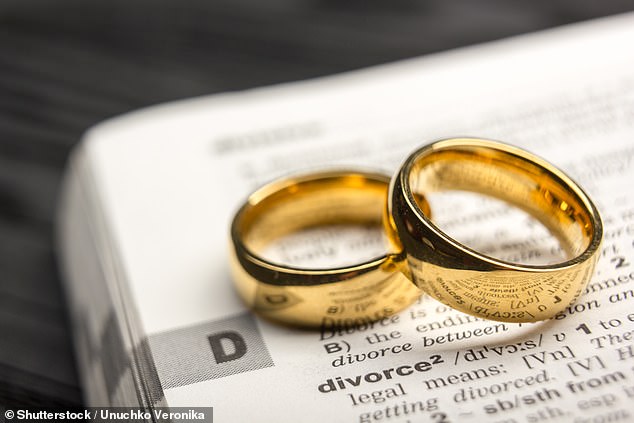 Only a third of the women surveyed said they have been offered treatment such as hormone replacement therapy (HRT) to help relieve their menopause symptoms.

And the majority thought that getting support or treatment could have potentially saved their marriage.

The findings were based on a poll of 1,000 women who were divorced or currently separating, conducted by the Family Law Menopause Project and Newson Health Research and Education.

All women had likewise either gone through or were going through the menopause.

Menopause occurs when a woman stops having periods, meaning she is no longer able to get pregnant naturally.

The process — triggered by the ovaries producing less oestrogen — is a natural part of ageing and usually occurs between the ages of 45 and 55.

All you need to know about the menopause

Menopause is when a woman stops having periods naturally and is no longer able to get pregnant naturally.

It is a normal part of ageing and usually happens between the ages of 45 and 55 when a woman’s levels of the sex hormone oestrogen drop.

Women are advised to see their GP if their symptoms are difficult to manage.

Treatments doctors can provide include hormone replacement therapy, such as tablets, skin patches and gels that replace oestrogen.

HRT is one way of treating the symptoms. It restores the levels of female hormones, bringing relief to hundreds of thousands of women each year.

Dr Louise Newson, a GP and menopause specialist, who runs Newson Health, said the mental aspects of the change were frequently overlooked.

‘Whilst the physical symptoms of the menopause are well-known and often discussed, the mental health impact is often ignored and can be catastrophic for many women, having a deeply negative effect on their work, relationships and finances as a result,’ she said.

Farhana Shahzady, founder of the Family Law Menopause Project, added the survey was concerning given how menopause also damaged women’s savings and income, which could add further hardship to a divorce.

‘Of deep concern to me is that more than half of the respondents said perimenopause or menopause had (or will) make it harder for them to save for retirement and/or reduce their ability to save into pensions,’ she said.

‘This means that women may face real financial hardship as they approach retirement, post-divorce/separation.’

The poll was carried online via Dr Newson’s website and the Family Law Menopause Project.

It comes as the International Menopause Society (IMS) published research raising awareness of brain fog in both menopause and perimenopause.

It said symptoms include difficulty remembering words and numbers, forgetting where objects were placed, trouble concentrating, difficulty switching between tasks as well as forgetting appointments and events.

According to the IMS, scientists believe that memory complaints may be caused by rising and falling hormones levels, especially oestrogen, and by hot flushes, sleep disturbances and changes in mood.

Dr Nicole Jaff, co-author of the paper, said: ‘Research studies find that a woman’s memory does change at menopause and “brain fog” is common.

‘While this can temporarily affect a woman’s quality of life, the good news is that symptoms are generally mild and resolve post-menopause,’ she said.

‘Women are often concerned that these memory issues are an early symptom of Alzheimer’s disease or dementia, but these conditions are very rare in midlife.

‘Women should be reassured that most memory problems before and during menopause will typically get better over time.’

Access to HRT has been hit and miss for many women over the past year, with tens of thousands struggling to get hold of the medication due to supply shortages.

While supplies have improved since the start of September, a dozen or so products are still classified as being in severe shortage by the NHS.

This classification limits pharmacists to only issue out three months worth of supply and allow them to provide alternative medications if they are out of a particular brand.

The serious shortage protocols are set to be reviewed on October 28.