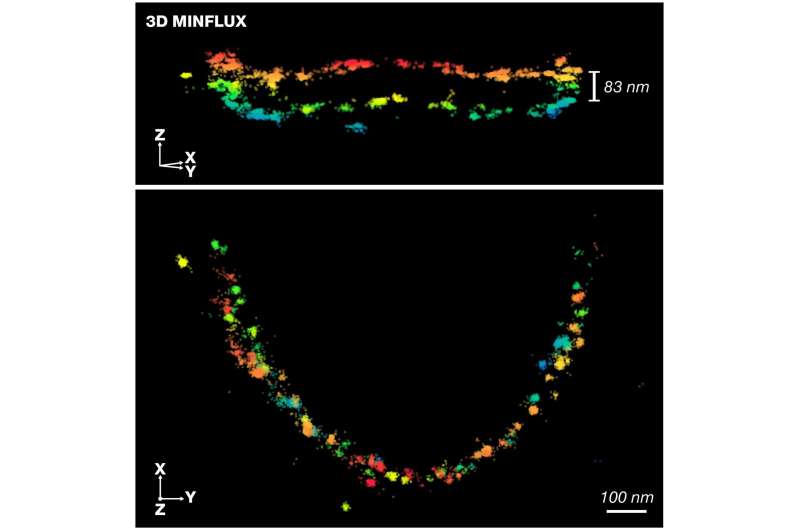 Scientists at the Institute for Auditory Neuroscience, UMG, the Max Planck Institute for Multidisciplinary Sciences and the Abberior Instruments GmbH have applied high-resolution 3D-MINFLUX technology for precise 3D representation of the molecular organization in the active zone of rod photoreceptor cells.

For the processing of sensory stimuli, the concerted interaction between nerve cells is crucial. Only a fast and efficient transmission of stimuli from the environment enables the body to initiate an adequate response, such as rapidly closing the eyelids or catching a flying ball. Years of research in molecular neurobiology have shown that nerve cells have developed strategies to optimize the processes of signal transmission at their synapses, the contacts between nerve cells. In the active zone of transmitter release from chemical synapses, the components required for signal transmission are brought into close spatial proximity and assembled into so-called macromolecular signaling complexes. The exact molecular organization of the active zone of synapses, where the release of neurotransmitters for signal transduction takes place, has not yet been clarified.

Researchers led by Prof. Dr. Tobias Moser, director of the Institute for Auditory Neuroscience at the University Medical Center Göttingen (UMG) and spokesperson of the Multiscale Bioimaging Cluster (MBExC), have now gained fascinating insights into the molecular organization in the active zone of rod photoreceptor cells. In collaboration with scientists at the Max Planck Institute for Multidisciplinary Sciences (MPI-NAT), the Collaborative Research Center 1286 and the company Abberior Instruments GmbH they succeeded in combining ultra-high-resolution 3D MINFLUX nanoscopy with a novel tissue immobilization technique. This allowed three-dimensional detail images of the active zone of the synapse to be obtained with a precision of a few nanometers. In this way, the researchers were able to decipher the molecular map of the active zone of photoreceptors. The images and findings were published in Science Advances.

The active zone of chemical synapses plays a major role in the perception and transmission of signals from the environment. When a nerve cell is excited by an external stimulus, transporter structures, so-called synaptic vesicles, fuse with the membrane in this special release zone. Neurotransmitters are released in the process. These chemical messengers pass through the synaptic cleft to a downstream nerve cell and thus transmit the stimulus information. Exactly what the organizational structure of the active zone looks like was not known until now.

In a joint effort, Prof. Moser, his team and the team at Abberior Instruments have now succeeded in visualizing these for the first time and created a molecular map of the synaptic active zone of rod photoreceptor cells from the retina of the eye. Rod cells play a role in image perception and their complex morphology makes them an attractive target for the use of high-resolution 3D imaging techniques.

“Via a novel sample immobilization technique, we call heat-assisted rapid dehydration (HARD), a thin layer of synaptic rod terminals from fresh retinal sections is deposited onto glass coverslips,” says Chad Grabner, scientist at the MPI-NAT and the UMG and one of the two first authors. “The combination with the optical 3D-MINFLUX nanoscopy technology, developed by Nobel laureate Stefan W. Hell from the MPI-NAT, can image proteins that are important for signal transmission in 3D at the ribbon-shaped active zones of the previously fluorescently labeled rod synapses with unprecedented precision,” says co-author Isabelle Jansen from the Abberior Instruments GmbH. The combined method enabled spatial imaging of about a thousand single-molecule fluorescence events at a resolution of four to six nanometers in less than 30 minutes.

The scientists moreover showed for the first time that the active zone proteins are arranged over about one micrometer like train tracks in parallel rows on both sides of the ribbon-like zone. A continuity that suggests that the vesicle release sites are arranged serially at regular intervals along the active zone. At the same time, the proteins in the adopted vesicle release sites appear to be only a few nanometers apart. “This is a very important finding. It provides new insights into the structure and function of the rod synapse and the active zone in general,” Prof. Moser says. “Our study further demonstrates that the combination of MINFLUX and HARD technology is a powerful approach to decipher the structure of synapses and other nanoscale functional units of cells in a near-tissue context.”