Cancer-stricken mother, 26, defies the odds to survive after doctors warned she had just four weeks to live when she was diagnosed

A cancer-stricken mother who was given just four weeks to live has defied the odds to survive.

Varrie Dunlop was diagnosed with stage four non-Hodgkin’s lymphoma in November, after doctors initially dismissed her fatigue as a viral infection.

The now 26-year-old, mother to four-year-old Lana, was told her blood cancer was so advanced she would die within a month unless she began treatment immediately.

Miss Dunlop, of Ringwood, Hampshire, endured 13 rounds of chemotherapy, which caused her to lose her hair and spend 21 days in hospital.

Her treatment was a success and she was given the all-clear last month. 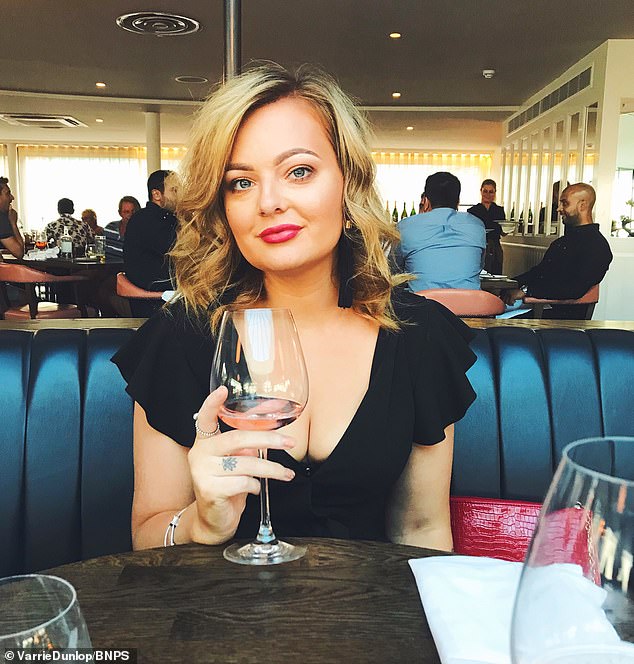 Varrie Dunlop was given just four weeks to live when she was diagnosed with stage four non-Hodgkin’s lymphoma last November. Pictured before her diagnosis, she immediately began 13 rounds of chemotherapy. Against the odds, the mother-of-one has been given the all-clear 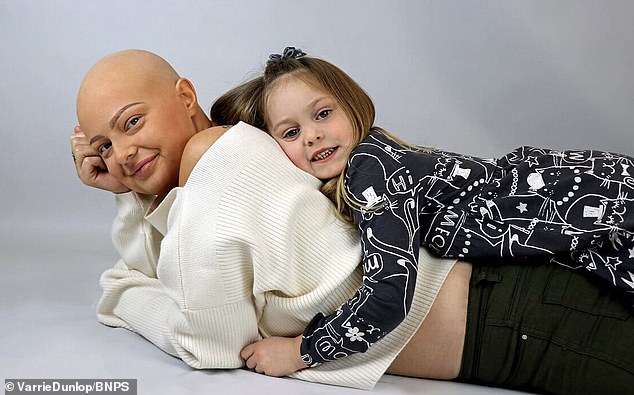 Pictured with her four-year-old daughter Lana, Miss Dunlop lost her hair due to chemotherapy

Miss Dunlop, who works as an insurance clerk, saw her GP after she developed extreme fatigue over Easter last year.

She was initially told it was likely a viral infection. However, when her symptoms failed to improve, she was admitted to hospital with sepsis a few months later.

While at hospital Miss Dunlop underwent a biopsy, which revealed she had advanced cancer.

Although devastated, she admits it was ‘a strange relief’ to finally know what was wrong.

However, things took a turn for the worse when doctors revealed the cancer had spread to her spinal cord and brain fluid.

‘I was told it was serious and within four weeks my organs would likely start to shut down because of the strain,’ Miss Dunlop said.

She also had a resting heart rate of 106 beats per minute (bpm), with a healthy person’s ranging from 60bpm to a maximum of 100bpm.

With no choice but to start treatment immediately, Miss Dunlop endured nine rounds of chemotherapy directly to her spine to stop the cancer fully entering her brain.

‘I’ve gone through intensive chemotherapy but being in remission now is amazing,’ she said.

‘I did always believe I would come through it because I’m a fighter but it was tough.’ 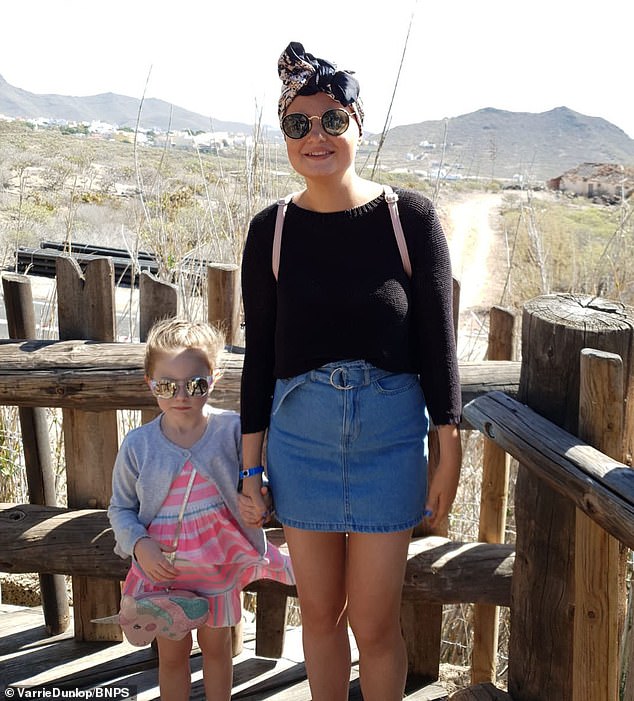 Pictured with Lana while battling the disease, Miss Dunlop was determined to fight her cancer for her daughter. Doctors warned her organs would shut down without imminent treatment 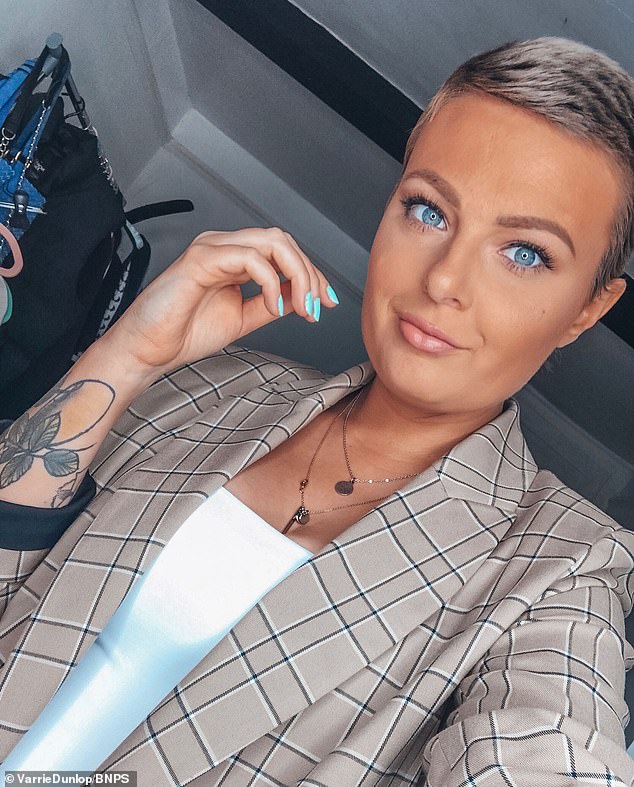 Pictured after being given the all-clear, Miss Dunlop wants to raise aware of cancer symptoms

Miss Dunlop, who lives with her parents and daughter, was determined to beat the disease for her Lana.

‘I’ve got a little girl so I was determined not to go anywhere,’ she said.

‘At first I wasn’t going to tell her but in the end my specialist said I should sit down and explain it to her because I’d be losing my hair and things like that.

‘I was in hospital for 21 days but my family rallied around me and it’s such an amazing relief I’m still here for my daughter.’

Miss Dunlop is speaking out to encourage others to be aware of non-Hodgkin’s lymphoma’s symptoms, which is most commonly a painless swelling in a lymph node.

Other symptoms can include night sweats, unexplained weight loss, fever, breathlessness and persistent itching all over the body. Fatigue, an increased risk of infections and excessive bleeding, such as nose bleeds, can also occur.

‘I thought I was tired because I was working hard and I had night sweats because it was summer,’ she said.

‘I would encourage people to insist on getting anything unusual checked out, even if they are not what you would normally link to cancer.

‘Insist your doctor takes you seriously.’

WHAT IS NON-HODGKIN LYMPHOMA?

Non-Hodgkin Lymphoma (NHL) is a type of cancer that starts in white blood cells called lymphocytes.

It affects the lymph system, which is involved in fighting infections and helping fluid move through the body.

NHL can start anywhere where lymph tissue is found, such as lymph nodes, spleen, bone marrow, tonsils and the digestive tract. It differs from Hodgkin’s lymphoma due to the type of immune cells it affects.

NHL is one of the most common types of cancers in the US, making up four per cent of all forms of the disease. Around 74,200 Americans will be diagnosed with the condition this year, according to Cancer.Net.

And it is the sixth most common cancer in the UK, with 13,682 cases in 2015, Cancer Research UK statistics show.

NHL is grouped depending on how quickly it grows and spreads. Indolent NHL grows slowly and may not require treating straight away. Aggressive NHL spreads quickly and requires immediate treatment.

Anyone can develop NHL, however, most cases occur in people in their 60s or older. For unclear reasons, it is also more common in men.

Some studies have suggested that exposure to certain weedkillers and pesticides may increase the risk, as do chemotherapy drugs and some arthritis medications. More research is required to determine this.

Patients treated with radiotherapy for other cancers are slightly more at risk of NHL in later life. Those with a weak immune system, such as HIV patients or people who have recently had an organ transplant, are also more susceptible.

A family history of NHL and being overweight are also linked to the condition.

Although rare, some women with breast implants develop a type of lymphoma in their breasts, which seems to be more common if the implants have a rough texture.

NHL treatment depends on how advanced a patient’s disease is but might include chemo, radiotherapy, a stem cell transplant or, in rare cases, surgery.