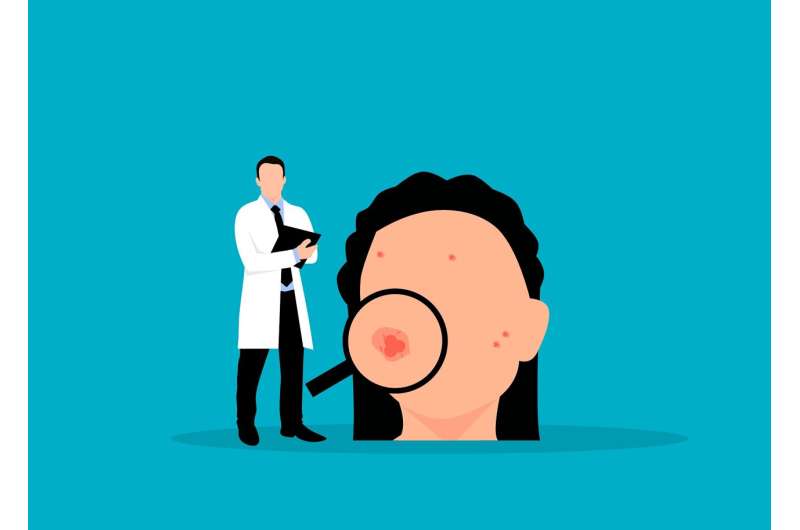 A new drug touted as the first real breakthrough in acne treatment in decades has been available for months in the United States, but when it will hit the shelves in Europe and elsewhere remains unclear.

The topical cream clascoterone could give fresh hope of respite from the red pimples and oily skin that plagues around three quarters of all teenagers—as well as many adults.

Despite being such a common affliction, new drugs to treat acne have been rare—though recent research has revealed the role played by diet.

But experts have hailed clascoterone as the first new type of acne treatment in nearly 40 years.

“What is so exciting about clascoterone is that it is a completely new mechanism of action that addresses the fundamental hormonal (causes) underlying all acne,” US dermatologist John Barbieri told AFP.

There have long been two main types of acne treatment. One uses antibiotics to target the bacteria that causes acne, while the other stops dead skin cells from building up.

Clascoterone however makes the cells less receptive to the hormones that produce sebum, an oily substance that normally keeps skin moist but which acne sufferers produce in excess.

There are pills that also target these hormones. But they are often contraceptive pills, so are only prescribed for women. And by directly affecting the body’s hormone production, they can have far worse side effects.

A 2020 study published in the journal JAMA Dermatology found that clascoterone was more effective than a placebo—and did not have significant side effects.

The study was enough to convince US authorities to approve the treatment, which US doctors have been able to prescribe since the end of last year.

French dermatologist Emilie Sbidian cautioned that the study did not compare clascoterone to existing treatments, “so we don’t really know where to place it”.

However she said the cream was “very interesting” because it could give a new option to patients reluctant about other drugs—or be used in conjunction with those other treatments.

However people with acne in Europe are unlikely to get their hands on the drug any time soon.

The wait is not due to any reluctance on the part of the health authorities. The European Medicines Agency told AFP it has not even started evaluating the drug.

The time frame instead comes down to the company that produces the drug, Switzerland’s Cosmo Pharmaceuticals.

“As a very small company, we were focused first on the biggest market of the world, which was the US,” said Diana Harbort, the head of Cosmo’s dermatology division.

Searching for a partner

She told AFP that “there isn’t one big company who has interest in acne around the world”, pointing out that big pharma firms like Pfizer, Sanofi and Novartis do not sell acne drugs.

This means that Cosmo needs partners to distribute the drug in each new world region. In the US, clascoterone is distributed by the firm Sun Pharma.

In its latest financial statement released this week, Cosmo announced it has found a distribution partner in China.

It has also agreed to a deal with Sun Pharma to expand into Japan, Brazil, Mexico, Russia, Australia and New Zealand.

So why is it taking so long to find a European partner? Cosmo pointed to the COVID-19 pandemic, saying it had slowed the market for such drugs.

However financial analyst Jamila El Bougrini said “the dermatology market is rather buoyant”.

“I think there have been errors in the group’s strategy,” she told AFP.

The analyst found it hard to understand why Europe’s medicine authorities had not started evaluating clascoterone.

She also pointed out that in recent years Cosmo had tried to sell its dermatology division—whose only product is clascoterone—but failed due to a lack of interest.