A newly developed sensor patch worn on the back of the neck may be helpful in predicting the risk of concussion in high-impact sports such as American football or judo, according to new research. The study, published in Scientific Reports, reports that the small and flexible device is able to detect sudden neck strain, such as whiplash, in a test dummy.

Collisions and non-collision accidents in contact sports can cause high speed neck movements that may lead to concussion. There are already devices available to help predict concussion, such as accelerometer-based sensors that detect motion when placed in an athlete’s helmet. However, these devices are bulky and can give false readings when the helmet moves on the person’s head.

Nelson Sepúlveda and colleagues developed a novel patch sensor using a film layer of thermoplastic material (known as a ferroelectret nanogenerator) that produces electrical energy when physically touched or pressure is applied. The electrical signal produced is proportional to the physical strain on the neck and can be used to estimate the acceleration and velocity of sudden neck movement, two important markers for predicting concussion.

To test the sensor patch, the authors applied the device to the back of the neck of a dummy that had accelerator-based sensors and a gyroscope inside the head. The authors then dropped the dummy from a suspended height of 61cm to simulate whiplash, and found that the sensor patch output had a strong positive correlation of 90% with results from the sensors inside the head. The authors report that there was on average less than 10% variation in the sensitivity of readings across different patch sensor devices.

The authors conclude that their device can potentially be used to measure whiplash and could be developed further to help detect concussion. However, further testing in human athletes and sports players is required. 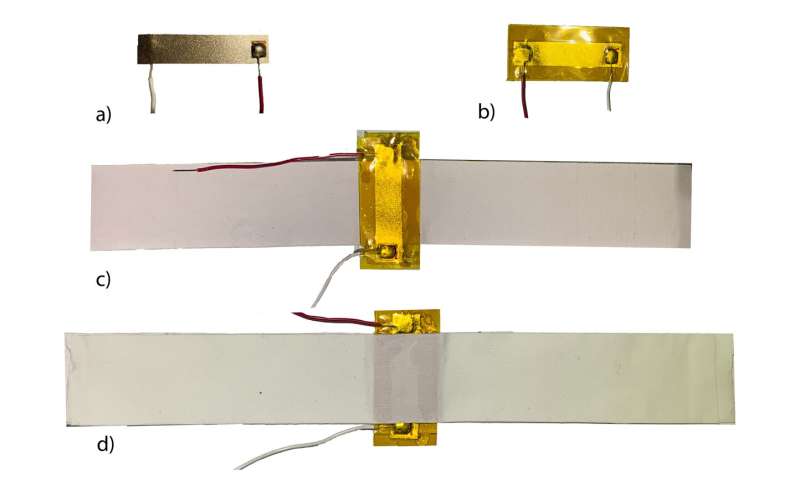