The NHS should give more overweight people gastric bypass surgery if they want it, campaigners say.

Research has shown the operations – which close off part of the stomach to reduce how much people eat – can reverse type 2 diabetes in three quarters of patients.

The call goes against experts’ past advice that NHS money would be better spent on trying to prevent obesity in the first place.

But the appeal of the procedure, believed to cost around £10,000 a time, could be broad – a quarter of British adults are obese and have diabetes. 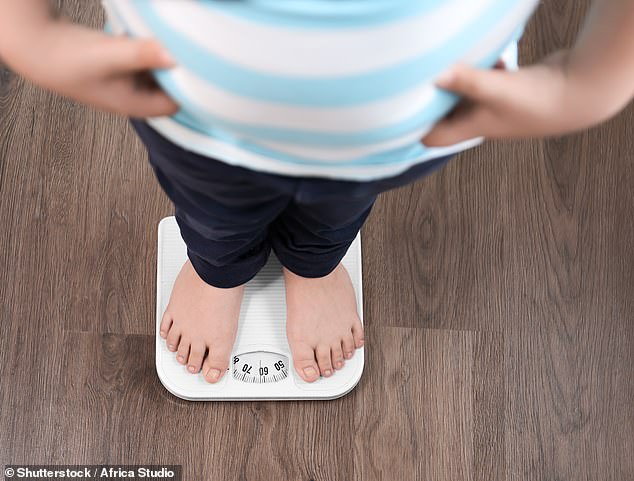 A quarter of British adults are obese and more than three million people have been diagnosed with type 2 diabetes, which, if left untreated, can lead to leg amputations, blindness, heart disease and stroke. Being overweight is a major risk factor for the condition (stock image)

The study, by scientists at Aarhus University Hospital in Denmark, looked at 1,111 type 2 diabetics who had a gastric bypass between 2006 and 2015.

They compared them to 1,074 patients who did not have the surgery, which is only offered to people who are morbidly obese.

Some 73 per cent of the surgery patients were free of diabetes – they had normal blood sugar and didn’t need medicine – for at least five years after their procedure.

‘The lack of bariatric surgery services in the UK means very few people can actually access this treatment and have the opportunity to put their type 2 diabetes into remission,’ Dr Emily Burns, from Diabetes UK, told The Times.

‘Even though not everyone who qualifies for bariatric surgery will want it, we believe the option should be there for those who do.’

Type 2 diabetes is rising in the UK as people continue to live less active lives and eat junk food – around 3.3million people are believed to have been diagnosed with it.

Obesity is a leading cause of the condition which, untreated, can lead to leg amputations, blindness, heart disease and stroke.

Gastric bypass surgery has been a controversial subject in the past, with the former chief executive of Diabetes UK, Baroness Barbara Young, saying the NHS should spend its money on prevention.

She said in 2014: ‘Give me the 5,000 quid that you would spend on an operation and put it into a weight reduction programme earlier on and we could win,’ The Telegraph reported.

Baroness Young added: ‘I don’t think that bariatric surgery should be an option for 800,000 people.

‘The more important thing is that we actually make sure that people who begin to develop overweight and head for obesity get effective interventions long before they fall within the criteria that would justify bariatric surgery.’

One gastric bypass operation is now estimated to cost between £8,000 and £15,000 if performed privately, according to the NHS.

In the Danish university’s study results showed 65 per cent of patients when into remission from diabetes within six months of the operation.

This rose to 74 per cent after six months, and remained almost the same for the next five years.

The patients were given a procedure called Roux-en-Y Gastric Bypass, which reduces the useable part of the stomach to a small pouch about the size of an egg.

A total of 7.5 per cent of the patients were readmitted to hospital because of complications – something the scientists said patients should be warned about.

Under-60s were more likely to go into remission after the operation, as were people whose diabetes had not been bad enough for them to have regular insulin injections.

The research was published in the journal Diabetologia.

WHAT IS A GASTRIC BYPASS?

It involves creating a small pouch in the stomach that restricts food intake and reduces nutrient absorption.

The pouch also limits food from coming into contact with the upper or lower intestine, further preventing absorption.

The operation involves five-to-six incisions in the abdomen.

Surgeons then staple the top portion of the stomach to separate it from the bottom, creating a pouch.

A small section of the small intestine is then attached to the pouch, allowing food to bypass to the lower stomach.