NHS workers have been told to keep an eye out for possible Ebola cases in Britain in travellers from Uganda as the African nation’s outbreak continues to grow.

No cases of the killer virus have been detected in the UK yet.

But in a public health alert issued last night, the UK Health Security Agency (UKHSA) urged medics to remain ‘vigilant’ for potential cases. Trusts have been told to ensure they have enough PPE.

The warning came as US authorities introduced airport screening for people arriving from Uganda, restricting their entry to major travel hubs. 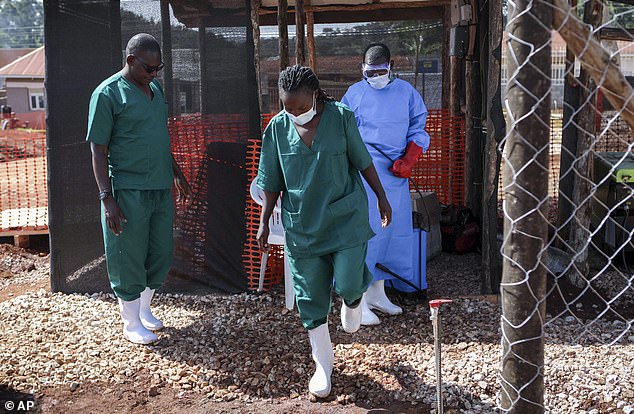 Ebola can be spread via contaminated bodily fluids or surfaces. Here a medical attendant disinfects the rubber boots of medical staff before they leave the Ebola isolation section of Mubende Regional Referral Hospital in Uganda 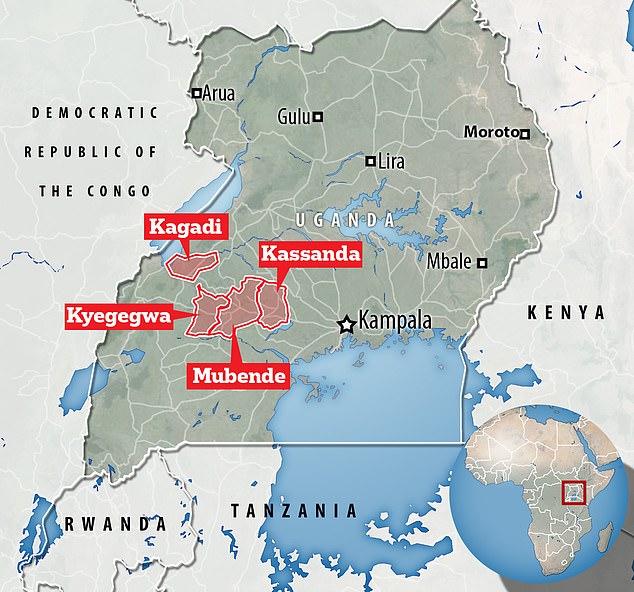 Since the initial outbreak of the virus was discovered in the central district of Mubende, cases have now been found in Kassanda, in the east, as well as in Kyegegwa, Kagadi, and Bunyangabu to the west

Ebola, a haemorrhagic fever, killed at least 11,000 across the world after it decimated West Africa and spread rapidly over the space of two years.

That epidemic was officially declared over back in January 2016, when Liberia was announced to be Ebola-free by the WHO.

The country, rocked by back-to-back civil wars that ended in 2003, was hit the hardest by the fever, with 40 per cent of the deaths having occurred there.

Sierra Leone reported the highest number of Ebola cases, with nearly of all those infected having been residents of the nation.

WHERE DID IT BEGIN?

An analysis, published in the New England Journal of Medicine, found the outbreak began in Guinea – which neighbours Liberia and Sierra Leone.

A team of international researchers were able to trace the epidemic back to a two-year-old boy in Meliandou – about 400 miles (650km) from the capital, Conakry.

Emile Ouamouno, known more commonly as Patient Zero, may have contracted the deadly virus by playing with bats in a hollow tree, a study suggested.

HOW MANY PEOPLE WERE STRUCK DOWN?

Figures show nearly 29,000 people were infected from Ebola – meaning the virus killed around 40 per cent of those it struck.

Cases and deaths were also reported in Nigeria, Mali and the US – but on a much smaller scale, with 15 fatalities between the three nations.

Health officials in Guinea reported a mysterious bug in the south-eastern regions of the country before the WHO confirmed it was Ebola.

Ebola was first identified by scientists in 1976, but the most recent outbreak dwarfed all other ones recorded in history, figures show.

HOW DID HUMANS CONTRACT THE VIRUS?

Scientists believe Ebola is most often passed to humans by fruit bats, but antelope, porcupines, gorillas and chimpanzees could also be to blame.

It can be transmitted between humans through blood, secretions and other bodily fluids of people – and surfaces – that have been infected.

IS THERE A TREATMENT?

The WHO warns that there is ‘no proven treatment’ for Ebola – but dozens of drugs and jabs are being tested in case of a similarly devastating outbreak.

Hope exists though, after an experimental vaccine, called rVSV-ZEBOV, protected nearly 6,000 people. The results were published in The Lancet journal.

Medics should look out for possible symptoms of the highly contagious virus in people returning from Uganda’s affected regions, UKHSA bosses said.

Tell-tale signs of Ebola, which kills up to half of people who get infected, include a fever, vomiting, bleeding from orifices and diarrhoea.

Hospitals and GP practices were also advised to ensure they have adequate infection prevention and control measures for the virus.

This includes having adequate supplies of personal protective equipment, such as masks, aprons, and visors.

The UKHSA insisted the risk to the public is ‘very low’, however.

The foreign office estimates that around 15,000 travel to Uganda every year.

More than 40 cases of Ebola have already been detected in five areas of Uganda, with nine confirmed fatalities and 20 more probable.

It is the East African nation’s worst Ebola outbreak in two decades.

Medics on the frontline feat the situation will only get worse in the coming days.

The UK warning comes as the US rams up its precautions towards the virus, imposing airport screening on travellers returning to America who have been in Uganda within the last 21 days.

This means people coming from Uganda to the US will need to go through five major US airports to ensure they are examined by health professionals on their arrival.

While the screening was introduced at these airports yesterday, it is understood the funnelling of travellers to these airports from elsewhere in the US will start in the coming week or so.

An estimated 140 people who had recently been in Uganda arrive daily in the US, with 62 per cent currently landing at one of the five airports.

The US introduced similar measures for travellers who had been in the Democratic Republic of the Congo and Guinea in March last year over concerns over an Ebola outbreak at the time.

On March 2021, the Centres for Disease Control began funnelling people who had been to the Democratic Republic of the Congo and Guinea within the prior 21 days to six US airports to address Ebola concerns.

Dr Michael Osterholm, an infectious disease expert at the University of Minnesota, said Ebola can be handled safely but health care professionals needed to be aware someone could the virus as soon as possible,

‘We can handle Ebola safely in the hospital setting and provide best care to the patient, but you have to be aware that it might even be a possibility,’ he said.

‘The key message is if you see someone with clinical illness and they had a history of being in Uganda, that’s where you want to concentrate your efforts.’

In the UKHSA alert Dr Meera Chand, the body’s director of clinical and emerging infection, said: ‘We are aware of an outbreak of Ebola cases in Uganda and are monitoring the situation closely.

‘The risk to the public in the UK is very low.’

No airport screening measures for the UK have been announced.

Ugandan health officials are desperately trying to contain the killer virus, which began spreading in the East African nation about a fortnight ago.

Of the nine confirmed fatalities in the country, at least are known to be in healthcare workers.

Since the initial outbreak was discovered in the central district of Mubende, cases have been found in Kassanda, in the east, as well as in Kyegegwa, Kagadi and Bunyangabu, to the west.

Ebola is an often-fatal viral haemorrhagic fever named after a river in Democratic Republic of Congo (DRC), where it was discovered in 1976.

The virus is mainly transmitted through exposure to bodily fluids between people or contaminated surfaces.

It naturally resides in fruit bats, monkeys and porcupines living in the rainforest, and can also be transmitted through eating uncooked ‘bushmeat’.

Ebola outbreaks are difficult to contain, especially in urban environments.

People who are infected do not become contagious until symptoms appear, which is after an incubation period of between two and 21 days.

The virus began spreading in Uganda in late September when the first fatality, a 24-year-old man, was recorded in the central district of Mubende, located 90 miles (145km) west of the capital, Kampala.

The victim tested positive for the Sudan strain of the virus — which Uganda hasn’t detected since 2012.

There are currently no licensed medications to prevent or treat this strain of Ebola.

Uganda, which shares a porous border with the DRC, has experienced several Ebola outbreaks, most recently in 2019 when at least five people died.

The DRC last week declared an end to an Ebola virus outbreak that emerged in eastern North Kivu province six weeks ago.

In previous Ebola outbreaks, high-risk individuals have been vaccinated with the Ervebo vaccine.

The WHO said ring vaccination — when cases and their close contacts receive the jab — had been highly effective in controlling Ebola’s spread in recent outbreaks.

But this jab had only been approved to protect against the Zaire strain, which is not responsible for the recent surge in cases.

Another vaccine made by Johnson & Johnson may be effective but has yet to be specifically tested against the Sudan strain.

Ebola has never spread between people in the UK.

But it was imported by a healthcare worker returning to the UK from Sierra Leone in 2014, amid intense transmission in West Africa. They fully recovered.