Quadruple-vaccinated Pfizer boss, 60, tests positive for Covid for the second time in a MONTH

Pfizer boss Dr Albert Bourla has tested positive for Covid for the second time in a month.

The 60-year-old — who has been vaccinated four times with his company’s shot — last had the virus in mid-August.

He revealed on Twitter Saturday he had tested positive again but was ‘feeling well and symptom-free’.

Dr Bourla revealed he had not yet had Pfizer’s new bivalent vaccine which is designed to work better against Omicron variants.

He used his back-to-back positive tests to warn people not to be complacent, adding: ‘While we’ve made great progress, the virus is still with us.’

It is unusual for someone to catch Covid twice in such a short time period as natural infection is thought to provide strong protection for several months.

A faulty test or leftover virus from the previous infection are normally the reasons people test positive in quick succession.

However, a small number of people do suffer genuine reinfections within short time periods. Those with weakened immune systems are thought to be at higher risk. 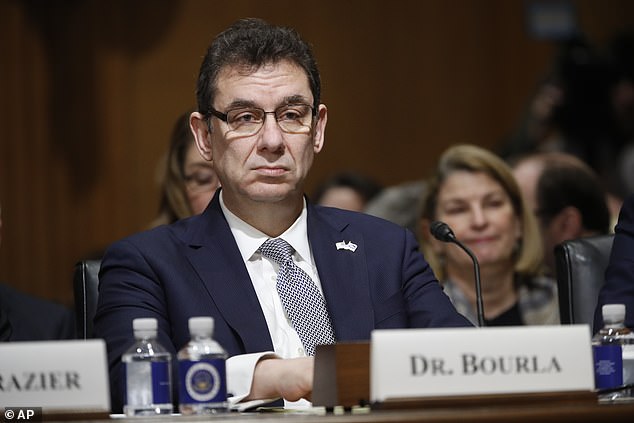 Pfizer CEO Bourla has tested positive for Covid for the second time in a month. Pictured: about to testify on drug prices before the Senate Finance Committee, on Capitol Hill in Washington in February 2019 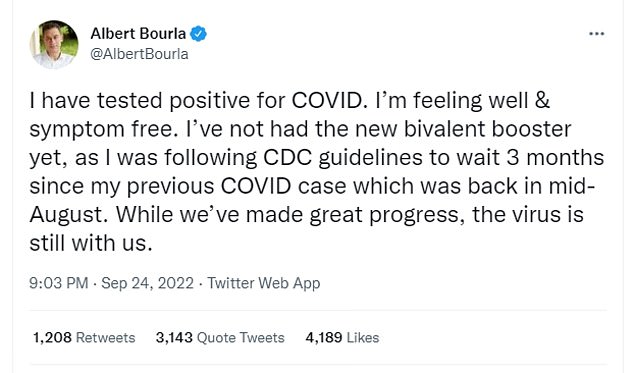 Bourla tweeted to his 55.3K followers to let them know of his positive test and warn them not to be complacent

Dr Bourla said he had not got his fifth vaccine because Centers for Disease Control and Prevention (CDC) guidelines say people should wait three months after a Covid infection.

During his infection last month, the CEO was given a course of Pfizer’s oral Covid antiviral treatment Paxlovid.

US health officials say 4.4 million Americans have rolled up their sleeves for the updated COVID-19 booster shot.

The Centers for Disease Control and Prevention posted the count Thursday.

The White House said more than 5 million people received the new boosters by its own estimate that accounts for reporting lags in states.

Health experts said it is too early to predict whether demand would match up with the 171 million doses of the new boosters the US ordered for the fall.

‘No one would go looking at our flu shot uptake at this point and be like, ‘Oh, what a disaster,’ said Dr David Dowdy, an infectious disease epidemiologist at Johns Hopkins Bloomberg School of Public Health. ‘If we start to see a large uptick in cases, I think we’re going to see a lot of people getting the (new COVID) vaccine.’

Paxlovid is an antiviral medication that is used to treat high-risk people, such as older patients.

In his tweet on Saturday, Dr Bourla said: ‘I have tested positive for Covid. I’m feeling well & symptom free.

‘I’ve not had the new bivalent booster yet, as I was following CDC guidelines to wait three months since my previous Covid case which was back in mid-August.

‘While we’ve made great progress, the virus is still with us.’

The comments appear to be in reaction to President Joe Biden’s comments last week that the Covid pandemic is ‘over’.

Biden’s remarks took officials even in his own administration by surprise and led to questions about why the government continues to enforce federal mandates and seek more funding to fight the disease.

In August, the FDA authorized Pfizer and Moderna’s updated booster shots that target the dominant BA.4 and BA.5 subvariants.

A federal health agency said this week that over 25 million doses of the so-called bivalent shots had been sent out.

But just 4.4million Americans have received the updated shot, according to the latest CDC data.

This number represents just 1.5 per cent of people currently eligible to receive the booster in the US.

The White House said more than 5 million people received the new boosters by its own estimate that accounts for reporting lags in states.

Health experts said it is too early to predict whether demand would match up with the 171 million doses of the new boosters the US ordered for the fall.

A temporary shortage of Moderna vaccine caused some pharmacies to cancel appointments while encouraging people to reschedule for a Pfizer vaccine.

The issue was expected to resolve as government regulators wrapped up an inspection and cleared batches of vaccine doses for distribution.

Overall, around 109million Americans have received at least one booster dose.

That represents just 35 per cent of the total US population over the age of five and less than half of those who were double-vaccinated.

The new bivalent Covid booster is a half and half vaccine, made from the genetic material of the original Wuhan Covid strain and Omicron.

This differs from the last generation of jabs that were based solely on the first Covid strain and are less effective against newer variants.