Pharmacists will be trained to spot signs of cancer in a bid to boost early detection and improve survival rates.

Customers who repeatedly come in for cough medicine or other drugs that could be a sign of more serious illness will be sent for cancer checks without having to see a GP first.

Those with symptoms including a persistent cough, difficulty swallowing or blood in their urine will be referred to hospital for further tests as part of a pilot scheme starting in Cornwall next month.

If successful, it will be rolled out nationwide in an attempt to ensure more cancers are caught early, giving people the highest chances of survival. 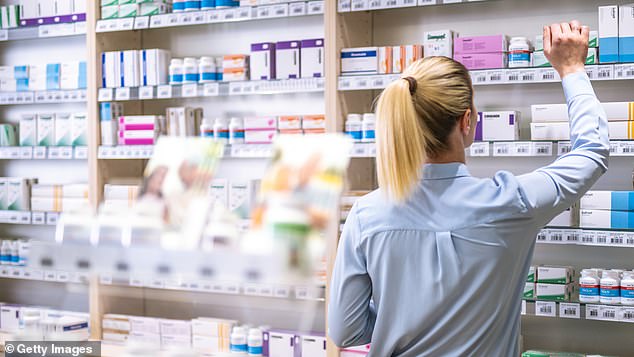 Pharmacists will be able to refer people with a persistent cough, difficulty swallowing or blood in their urine will to hospital for further tests. More than 11,000 pharmacies in England can now access training to spot signs of cancer as part of a new drive to catch tumours earlier when they are easier to treat

‘Detecting cancer earlier is vital for giving people the best chance at having successful treatment,’ he said, adding: ‘Encouraging people who would not normally seek help is yet another example of the NHS doing all it can to make getting potentially lifesaving tests and checks as convenient as possible.’

More than 11,000 pharmacies in England can now access training to spot signs of cancer as part of a new drive to catch tumours earlier when they are easier to treat.

Officials hope it will ease pressure on GPs, with latest data suggesting a further 500 full time family doctors have left the profession in the last year alone. 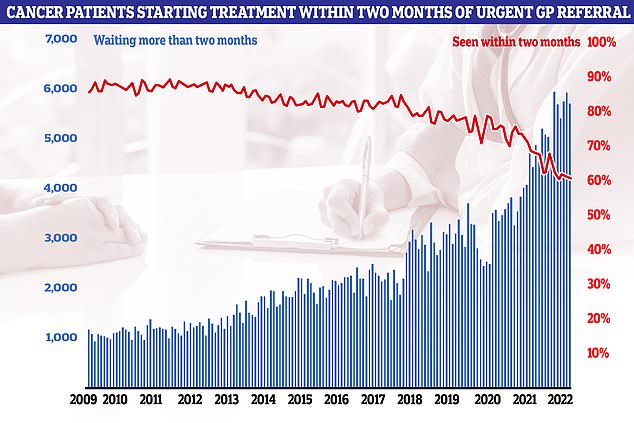 Cancer performance data shows that just six in 10 cancer patients started treatment in October within two months of an urgent referral from their GP (red line). The figure is the second-lowest logged since records began in 2009. NHS targets set out that the figure should be at least 85 per cent. It means 5,728 people waited more than eight weeks to start cancer treatment (blue bars)

A cancer vaccine that uses the same technology as Covid shots has been shown to slash the risk of tumors returning in advanced melanoma patients.

The shot, combined with an immunotherapy drug, reduced the chance of relapse or death in sufferers after surgery by 44 percent, compared to the drug on its own.

Using pieces of genetic code from patients’ tumors, the vaccine effectively ‘teaches’  the body to fight off cancer.

Every shot is tailored to a specific patient, meaning no two will be the same.

Pharma giants Merck and Moderna – who are co-developing the technological advance – heralded the results as a ‘tremendous step forward’ and a ‘new paradigm’ moment.

They will now ‘rapidly’ seek approval for a final stage clinical trial that will confirm the vaccine’s efficacy on a much larger group of patients.

If successful, it could be approved within six months of the study’s end.

It comes after leading oncologists and doctors warned cancer care was at a ‘watershed moment’ and called for action to tackle the crisis engulfing UK cancer services.

Writing in the Lancet earlier this month, they cited European research data suggesting there has been a 17 per cent increase in UK cancer deaths due to delays in diagnosis and treatment.

NHS data from November showed in the last 12 months, 69,000 patients in the UK waited longer than the recommended 62 days from suspected cancer referral to the start of treatment – twice as many than in 2017-18.

Meanwhile, a league table drawn up by leading international researchers earlier this year found the UK is lagging behind many comparable countries in cancer survival rates

More than half a million people have so far received a lifesaving heart blood pressure check at their local pharmacy, preventing an estimated 3,700 strokes and 2,500 heart attacks and saving around 2,000 lives in five years.

And more than 440,000 people have been treated for a minor illness at their local pharmacy in 2022, after a referral from NHS 111 or their GP practice.

He said: ‘Not only could this benefit people who might not otherwise have asked for help but it will also help ease pressures on GPs’.

It comes as a poll found nine in ten people were happy with the advice they received from their pharmacists.

An Ipsos survey of 2,000 adults found 91 per cent of those who had used a community pharmacy in the previous year for advice about medicines, a health problem or injury, or what health service they should use said they received good advice.

Scientists say the chemicals routinely added to bacon, ham and deli meats should be banned after research suggests it raises the risk of cancer

Women who think they have long Covid could actually be suffering from the menopause and need HRT, experts say