The milk aisle of the supermarket is a very different place to what it was at the start of the century. Beside the classic cartons of cow’s milk you’ll find soy, almond, oat, rice and coconut milks. Even macadamias, hemp seeds, cashews and hazelnuts are being turned into the breakfast staple.

One of the biggest reasons driving people to drink plant-based milk is environmental. Others choose to because they want to avoid animal products, or they think it’s healthier with their daily coffee. 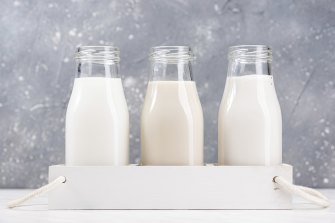 Plant-based milks are all the rage.Credit:iStock

But the sheer volume of milks out there can be overwhelming – so how do you choose one that ticks the boxes?

First, a look at what’s in dairy milk. Accredited practising dietitian Jane Freeman says that it brings several health benefits, the most important being calcium and protein. It’s also a source of vitamins A, D and B12, and zinc. It tends to be higher in saturated fat than plant-based alternatives, but you can buy reduced fat dairy milk.

Freeman, a spokeswoman for Dietitians Australia, warns that as it is, a lot of us are already missing out on important nutrients: only one in 10 Australians are meeting the recommended two or three daily servings of dairy and its alternatives. So she advises anyone choosing not to drink cow’s milk to ensure they’re not missing out on the key nutrients it offers, most notably calcium, which is vital for bone health.

On dairy milk’s environmental footprint, Curtin University professor of sustainability Dora Marinova says it’s indisputable that it’s worse for the planet than plant-based milk. A 2018 Oxford University meta-analysis estimates that a glass of dairy milk results in almost three times more greenhouse gas emissions than non-dairy, though Australian milk is thought to fare a bit better. It also requires up to nine times more land and much more water: almost double the amount of almond and 13 times more than oat. But of course, not all milk alternatives are equal. Ahead, we examine the most purchased varieties.

This one is the popular alternative. Freeman says it’s very low in kilojoules and saturated fat, but it has very little protein, despite raw almonds being a good source of this. That’s because it’s mostly water: some products contain as little as 2 per cent almonds, which are ground and soaked to make the milk. Sweetened versions are higher in kilojoules, so look out for added sugars on the ingredients list, such as rice syrup. Freeman recommends buying almond milk that is calcium-fortified and has added vitamins.

From an environmental standpoint, almond milk hasn’t had a great rap lately. It doesn’t require much land, but it’s the thirstiest of the plant-based milks to produce, Marinova says, with one kernel requiring about 12 litres of water. Put another way, a glass of almond milk will have required more than 70 litres of water. “In a continent like Australia, we have to be more cautious with how we use our water,” she says. Then there’s the bees issue. In California, which produces 80 per cent of the world’s almond supply, bees are used to cross-pollinate the trees, but billions are dying likely due to pesticides. Marinova says the industry is smaller in Australia so doesn’t have the same problems, so if you’re going to drink almond milk, stick to brands made with Australian nuts.

It’s the original milk alternative, made by soaking and grinding soybeans, and Freeman says it has a lot to offer: “I would rank is as the better of the dairy-free options.” A 2017 study found that soy was nutritionally the best alternative to cow’s milk when compared with almond, rice and coconut. It’s a great source of protein, containing similar levels to cow’s milk, and the kilojoules are comparable, but it has much less saturated fat. Freeman recommends looking for one that’s fortified with calcium and vitamins, and avoid added sugars. Some fear that phytoestrogen, an oestrogen-mimicking compound contained in soy, increases the risk of cancer, but Freeman (who works with cancer patients) says the science doesn’t back this.

On the eco front, soy milk uses amongst the least amount of water, Marinova says, and its land use and emissions are also relatively low. But she warns that a lot of land is being cleared overseas, particularly in Brazil where the Amazon is being deforested, to grow soybeans largely to feed livestock. She recommends people stick to soy milk made with Australian soybeans.

While almond is still on top, oat – made by straining oats blended with water – is rapidly growing. In the US, it overtook soy to become the second biggest plant-based milk. It’s the only milk to contain fibre, which can help lower cholesterol, and it’s very low in saturated fat. Freeman says it has slightly higher protein than almond, but it’s still low. It’s also naturally sweet – it contains about 50 per cent more carbohydrate than dairy, while kilojoules are similar. Again, Freeman recommends looking for a brand fortified with calcium and vitamins.

Marinova says that oat is similar to soy, in that it’s overall a good environmental option. But, she says most oat production is for livestock and grown as part of large-scale monoculture operations in North America, which affects the surrounding natural ecosystem. So, the best bet is to buy milk made with Australian oats.

Freeman says rice milk, which is made from milled brown rice blended with water, is the highest in carbohydrate – more than double the amount of dairy – because it has natural sugars. It has only slightly fewer kilojoules, very low protein and almost no saturated fat. It also has a high glycaemic index, meaning it can cause blood sugar spikes, which can be a worry for people with diabetes. “Nutritionally I wouldn’t rate rice milk highly,” Freeman says, adding the only benefit is that it’s lowest in allergens, but people should only buy calcium-fortified brands.

Environmentally, rice milk isn’t quite as thirsty as almond milk, but it’s definitely up there. Marinova says it also contributes more to greenhouse gases than the other milks because the roots of the plant develop a bacteria that emits methane.

Freeman says this milk – made from grated coconut flesh and water – is best reserved for the odd smoothie rather than as a daily staple. It has less saturated fat than full-fat dairy, but double that of low-fat dairy and far more than any of the plant-based alternatives. She adds that it’s very low in protein, has no calcium and while it’s naturally low in carbohydrate, some brands add sugar, which lifts the kilojoules.

The environmental footprint of coconuts isn’t too bad, Marinova says. Coconut farming doesn’t require a huge amount of water and its impact on the land isn’t so bad, but she adds that there are concerns that with more demand for coconut products, rainforests in tropical parts of Asia are being destroyed. Again, buy Australian if you can.

The big takeaway from a nutrition perspective is that plant-based milk is fine to have in your diet if you’re reading the labels, Freeman says. Check what you’re buying is fortified with calcium and avoid added sugars. “Don’t blindly assume that these milks are halo milks,” she says. And if you’re not drinking dairy or soy milk, then make sure you’re getting enough protein in other ways.

Marinova’s message is that any plant-based milk is much better for the environment than dairy. She encourages people to buy brands made with Australian produce, and organic is also better for the planet. Importantly, though, she urges people to diversify rather than getting attached to just one type of milk, because when demand surges, there’s a risk of other problems associated with industrial-scale growth.

Make the most of your health, relationships, fitness and nutrition with our Live Well newsletter. Get it in your inbox every Monday.

Most Viewed in Lifestyle