‘The skin was like thick leather…my legs became almost totally black’: Postman has BOTH feet removed after severe ‘flu’ turned into deadly sepsis

A postman who lost both of his feet after ‘flu’ developed into deadly sepsis has revealed how he was just hours from death.

But, rising the next day at 5.30am, he woke with aching bones and flu-like symptoms – fluctuating between sweats and chills – and was forced to quit his round half way through.

Soon, the father-of-two began to shake uncontrollably, his face became covered in a rash and his feet turned freezing cold.

They are all classic symptoms of sepsis, a serious complication of an infection, which causes the immune system to attack the body’s tissue and organs.

Mr Nulty, of Horsham, West Sussex, who lives with his girlfriend, Shaaron Sargent, 45, revealed his feet became ‘totally black’ as his body fought against sepsis. 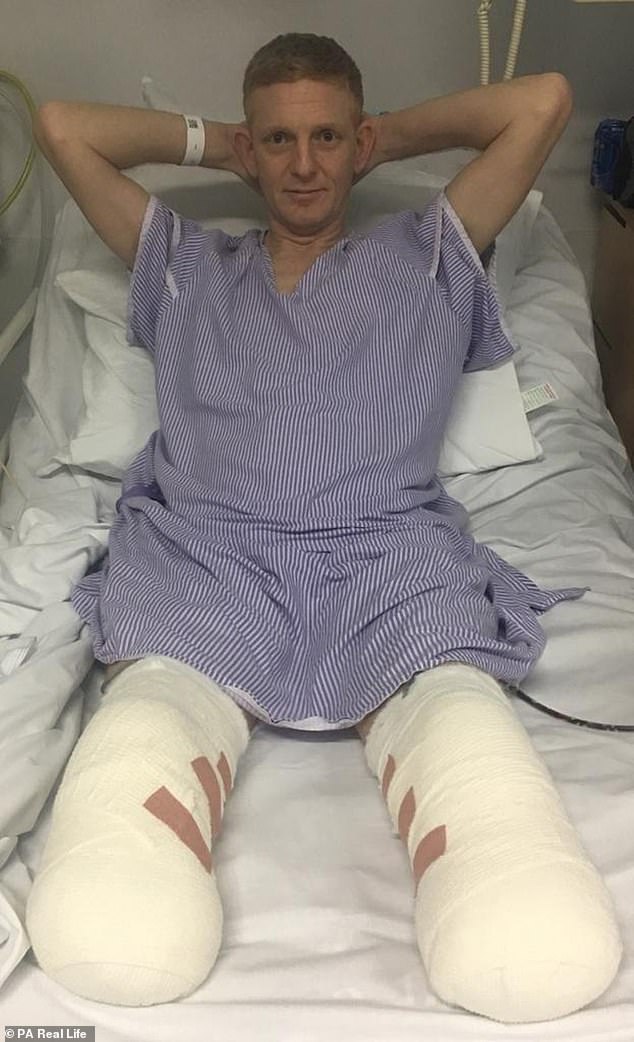 Life-changing: Ryan Nulty, 46, of Horsham, West Sussex, pictured shortly after his dramatic double amputation, which saw him lose both feet in 2018 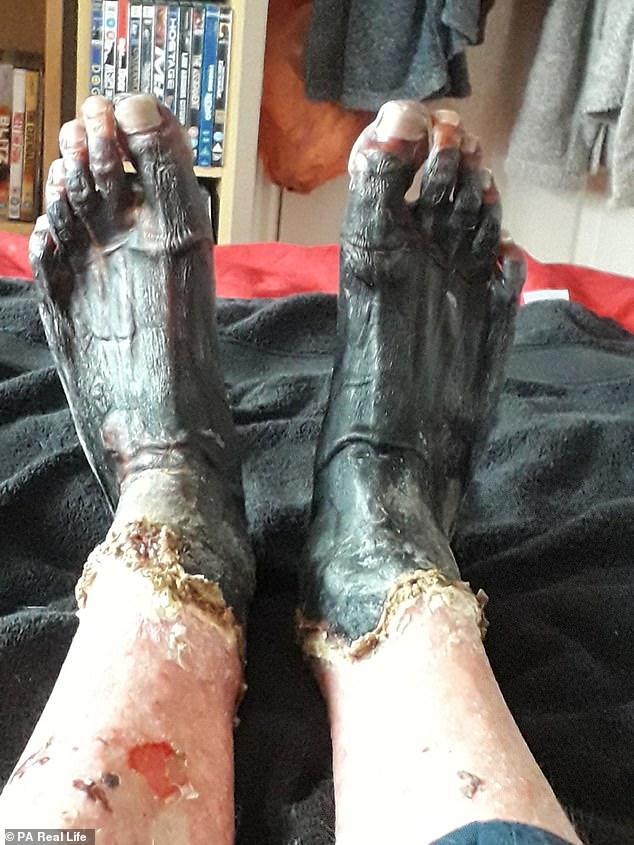 Deadly: The 46-year-old’s feet turned ‘black and leathery’ as the tissue was effectively dead, because of a lack of blood supply, causing gangrene

Slipping in and out of consciousness, Mr Nulty was rushed to Redhill’s East Surrey Hospital.

He was immediately put into an induced coma in the intensive care unit to help protect his organs from sepsis, which was by then attacking his system.

Recalling the build-up of events, Mr Nulty, who has a daughter Sophie, 22, and a son Joseph, 19, from a previous relationship, said: ‘On the Saturday, I felt pretty terrible, but as all men do, I just went home, ran a bath and got into bed, hoping I’d be able to sleep it off.

‘Then the next morning, I woke up feeling far, far worse and I remember my feet being so cold that I had to put Shaaron’s fluffy pink slippers on.’

When he finally came to eight days later on October 22 – after being brought out of the coma – he had no idea where he was or what had happened, becoming very delusional and unable to distinguish dreams from reality.

He explained: ‘I had all sorts of crazy ideas going through my head, like that there was some kind of big conspiracy going on within the NHS and I was there to expose it. I was totally out of it.’

With the sepsis still in his body, on November 3 he was transferred to an intensive care unit at St Helier Hospital in Sutton, as it was closer to home, where he was given dialysis for six hours each day for three days to help his failing kidneys filter the blood. 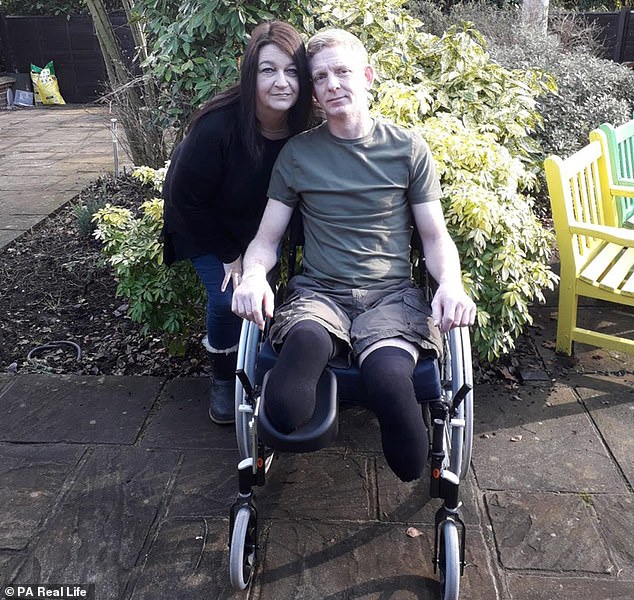 Support: Mr Nulty lives with his girlfriend, Shaaron Sargent, 45, who has helped him to cope with the ordeal – and first suspected that his life was in danger 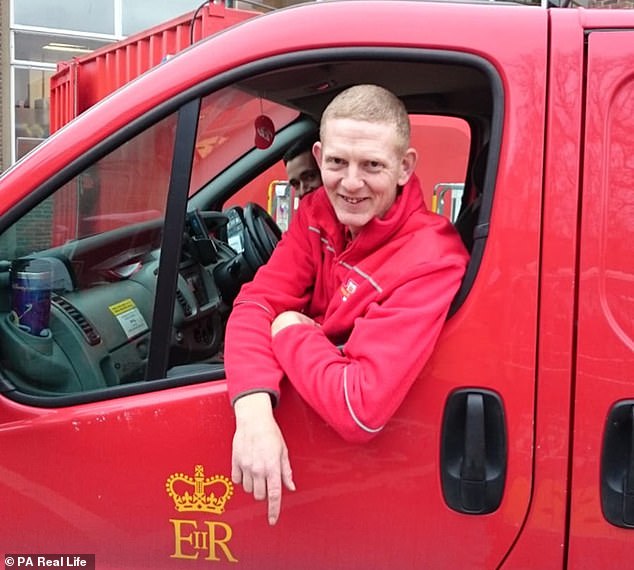 Before the incident: Mr Nulty photographed on one of his Royal Mail delivery rounds  in Redhill’s East Surrey, where he’s known to the community 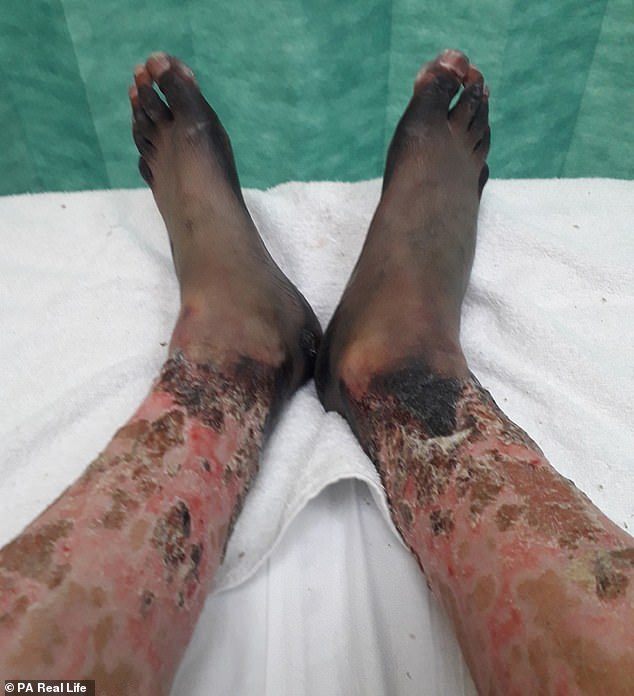 Suffering: While his body had fought to protect his vital organs, the extremities were neglected – leaving the doctors no choice but to amputate

Gradually, he began to get better as the sepsis – which doctors put down to a latent case of meningitis, which Mr Nulty had not realised he had – began to recede.

But his ordeal had taken a terrible toll during his two-month hospital stay, which ended on December 4.

While his body had fought to protect his vital organs, the extremities were neglected and his feet were ‘black and leathery’ as the tissue was effectively dead, because of a lack of blood supply, causing gangrene – leaving the doctors no choice but to amputate.

‘By the time the doctors said when I was at St Helier that I’d have to have my feet cut off, I wasn’t really that shocked as they were in a terrible state,’ he said.

‘Nevertheless, though, it was still distressing.’

With the operation booked for January 31 at the Royal Sussex County Hospital in Brighton, Mr Nulty was allowed to return home for a few weeks, where he was nursed by his girlfriend, who had quit her job to look after her partner of three years.

‘Shaaron was wonderful,’ he recalled. ‘She helped me dress, gave me baths and took me around in a wheelchair. Without her, I don’t know what I’d have done.’

While Mr Nulty admits there were nights when he and Shaaron would burst into tears at the thought of what life would be like for him without feet, as the operation drew nearer, he became more accepting of his fate.

He said: ‘I called my feet my Saxon boots because they had become rock hard and they were almost totally black. The skin was like thick leather.

‘I knew they had to go and by the time I had the operation I just wanted them off. I went into the operating theatre with a smile on my face and I came out two and a half hours later with a smile, too.

‘I felt relieved, even though it was very peculiar to look down and see the space where my feet had been.’ 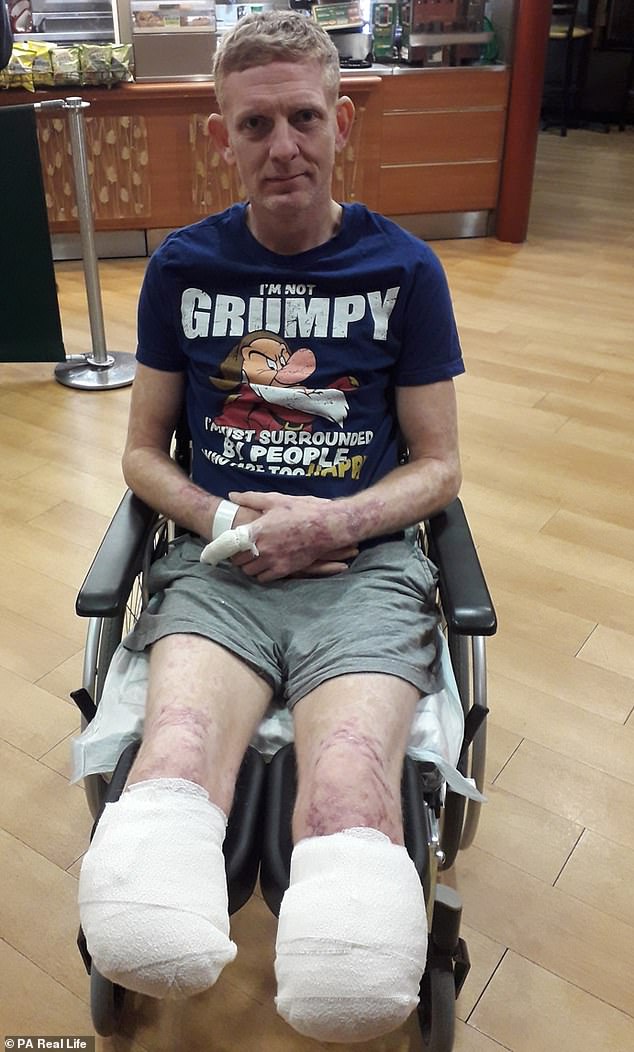 Strong: While Mr Nulty admits there were nights when he and Shaaron would burst into tears at the thought of what life would be like for him without feet, as the operation drew nearer, he became more accepting of his fate 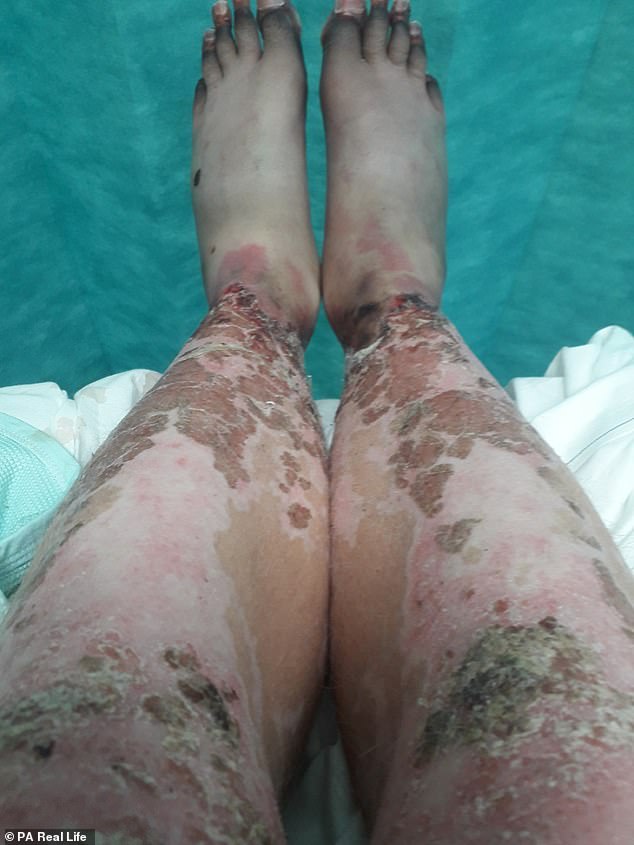 Tough: He will not be able to return to his job as a postman, he still hopes to work in a different capacity for the Royal Mail, and despite all he has been though is optimistic about the future 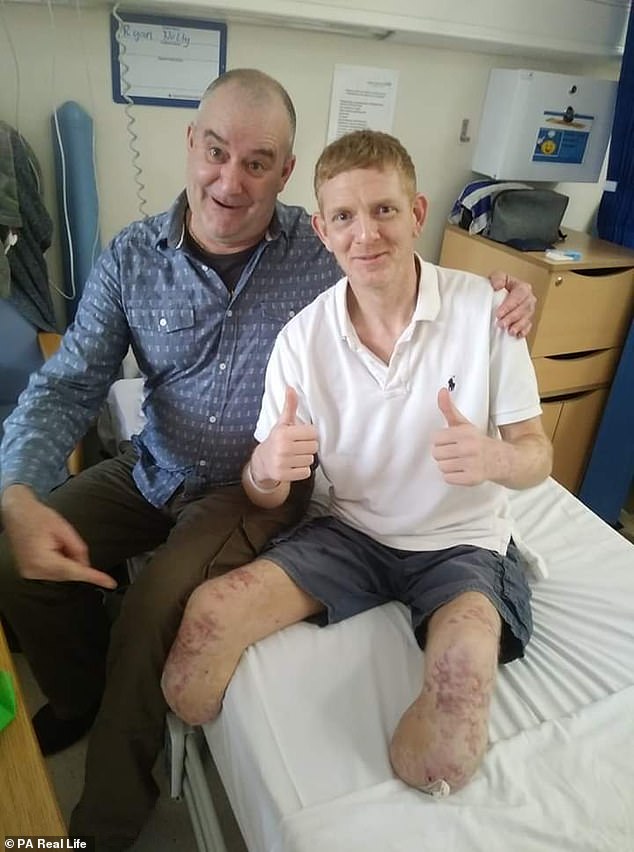 Awareness: Mr Nulty, pictured with his brother-in-law Paul, has launched a GoFundMe page to raise money for mobility equipment and to raise awareness for the condition

Now recuperating from the operation – which involved amputating his feet at the shin – in a recovery unit at Horsham Hospital, Mr Nulty is building up his strength in preparation for being fitted with two prosthetic legs which will enable him to walk again.

Though he will not be able to return to his job as a postman, he still hopes to work in a different capacity for the Royal Mail, and despite all he has been though is optimistic about the future.

‘My life has been turned upside down in the blink of an eye, but I don’t feel any self-pity or bitterness in any way,’ he said.

‘It could really have been catastrophic, but luckily I have a loving family who supported me all the way through this.

‘And Shaaron, in particular, was incredible. When a lot of partners might have turned heel, she was with me throughout.

‘It’s created a bond between us that’s stronger than I could have ever imagined, and together I feel like we’re about to embark on a new chapter of our lives.

‘Things may be difficult for me in the future, but I have every confidence that I will conquer it all. I have plans to mow my lawn this summer and take my Staffordshire Bull Terrier dog for his walk – and I intend to keep them.’

Ms Sargent, who was told on several occasions by doctors to prepare herself for the worst, has nothing but praise for her courageous partner.

‘I cannot describe how emotional it was to be told that Ryan may not make it – I felt like my heart was physically breaking.

‘It has been humbling how brave and positive Ryan has been throughout this all. He’ been absolutely astonishing.’

The UK Sepsis Trust, a charity founded with the aim of stopping preventable sepsis deaths, said: ‘Sepsis can arise in the body as a result of any infection.

‘Although only about one per cent of sepsis cases arise from meningitis, this case demonstrates that sepsis can strike indiscriminately, at any time.

‘If you or someone you know shows signs of infection it’s crucial to seek urgent medical help. With each hour that passes before the right antibiotics are administered, risk of death increases.’

What are the symptoms of sepsis?

Sepsis, known as the ‘silent killer’, strikes when an infection such as blood poisoning sparks a violent immune response in which the body attacks its own organs.

It is the leading cause of avoidable death, killing at least 44,000 a year.

If caught early, the infection can be controlled by antibiotics.

But the early symptoms of sepsis can be easily confused with more mild conditions.

A patient can rapidly deteriorate if sepsis is missed early on, so quick diagnosis and treatment is vital – yet this rarely happens.

In the early stages, sepsis can be mistaken for a chest infection, flu or upset stomach.

The six signs of something potentially deadly can be identified by the acronym ‘SEPSIS’: