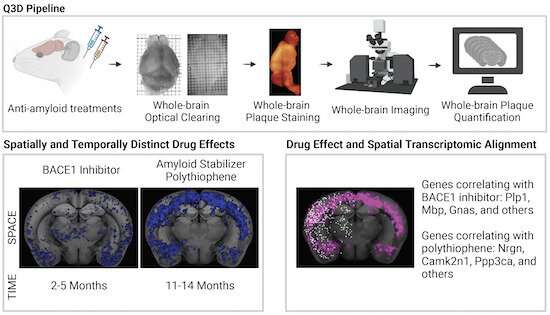 “Even though I’m a professor now, I still spend a lot of time in the lab, as I know that when I’m at the microscope, working hands on, that’s when I get the new ideas,” says Peter Nilsson, professor of organic chemistry at Linköping University (LiU) in Sweden. He develops tracer molecules that can recognize different proteins. The molecules are used in research, including Alzheimer’s disease studies. Interdisciplinary collaboration is one of the keys to his success.

Looking down at us from a shelf in Nilsson’s office is Jimi Hendrix, a cigarette in the corner of his mouth. The miniature electric guitar in front of him hints at the type of music often played here. Music has played a role in Peter focusing his research on neurodegenerative diseases, which break down the brain. Many such diseases are linked to proteins that assemble into aggregates that can damage cells.

“As a Ph.D. student, back in the early 2000s, I was tasked with using the precursors to the tracer molecules we have today. I sat in the lab, listening to hard rock. That’s how I met Per Hammarström, also a hard rock fan, who had recently come back to LiU after a postdoctoral in San Diego. He was working on protein aggregates. We started talking about the molecules and realized that wow, they can probably be used on protein aggregates.”

More than 20 years later, they are still close colleagues. Making strong bonds seems to be a recurring theme for Nilsson. Growing up, he was attracted to team sports, and now sees research as a team effort too. He is inspired by people who build a good team that manages to accomplish more than they thought possible.

“Cooperation is what makes science fun. Together, we keep coming up with things we can test in the lab.”

When Nilsson began working on tracer molecules, they consisted of small chemical parts that built themselves into long chains, known as polymers. Since then, the researchers have reconstructed the tracer molecules with molecular precision, so that they know the exact location of each and every atom.

“Every new step we have taken has involved more organic chemistry. Polymers, which build themselves, work well for looking at things in test tubes. But if we want to use them for diagnosis and treatment, the tracer molecules must be very specific and able to find one particular molecule among thousands,” he says.

The tracer molecule’s ability to recognize a specific protein is what makes it useful to researchers worldwide. Once the tracer molecule has found its target protein, it binds to it and, thanks to its bendable spine, can mold to it. The clever thing is that when the researchers shine a light on the tracer molecules, they shine back. This phenomenon is called fluorescence. Depending on the twist of its spine, a molecule can give off different colors. Thanks to this, researchers can study the shape of the harmful protein aggregates, which could be a key to understanding Alzheimer’s disease and other types of dementia.

Once the LiU researchers have found a well-functioning molecule, they modify it in various ways, not only to make it work better, but also to understand exactly which details of it are necessary for its function.

They have now started to develop tracer molecules that bind only to aggregates found in Alzheimer’s disease, and not to similar plaque in closely related diseases. This opens up the possibility of using tracer molecules on humans, to find the harmful protein aggregates and give a specific diagnosis.

“We have found molecules that we want to develop for diagnosis. We could perhaps label the molecules with radio isotopes so that they can be detected using hospital PET scans. I think that within the next 5–10 years, we may have developed molecules that can be tested for diagnosis,” says Nilsson.

In the last few years, the researchers have seen that the tracer molecules can also potentially be used as treatment. Their study, recently published in EMBO Molecular Medicine, used mice with an Alzheimer-like disease, where misfolded variants of the amyloid-beta protein assemble to form brain plaque. The misfolded proteins can also convert normal variants into the harmful form, resulting in increasing amounts of protein aggregates.

In the study, led by researchers at the University of Zürich, the mice that had received the LiU researchers’ tracer molecule had less amyloid plaque. The researchers believe that the fateful chain reaction is blocked when the tracer molecules bind to the harmful protein aggregates.

“In contrast to other treatment strategies being researched for Alzheimer’s disease, it seems like our molecule works on mice of various ages, not only on the young individuals at the initial stage of disease. This is interesting, as it is thought that the aggregates formed in neurodegenerative diseases are formed approximately ten years before any symptoms are noticed. That’s why it’s interesting to find treatments that could potentially work even when the process has been going on for a long time, and the disease is discovered,” says Nilsson.

Nilsson enjoys international interdisciplinary collaboration with researchers at, for example, Indiana University, the MRC Laboratory of Molecular Biology in Cambridge, the University Hospital in Zürich, and the German Center for Neurodegenerative Diseases.

“These collaborations include researchers in theoretical physics, organic chemistry and medicine. We’re at the center of this and can talk to and understand the researchers from various fields. We often function as scientific interpreters between participants in various projects.”

He has participated in many of these collaborations for more than ten years. Continuity is important. Through their postdoctoral periods abroad, the group’s researchers have built a network that lives on.

“In interdisciplinary collaboration, boundaries between chemistry, physics and medicine are blurred. I personally enjoy learning new things from others. For interdisciplinary collaboration to work, you must be able to say ‘I don’t understand this,’ and then your colleagues will have to explain in another way, so that we can really talk to each other. This can be a bit difficult sometimes,” he says, laughing.

He also believes that another success factor is that this collaboration involves an exchange.

“We send them molecules and they send us tissue and material, which helps us develop the tracer molecules. This exchange enables us to do so much more. We can confirm each other’s data and we also find new things to study more closely.”

Interdisciplinary collaboration leads to new research ideas. Nilsson comes back to the idea that it is important to dare to keep trying new things.

“In our field of research, it’s all about doing the experiments. Many times you don’t think it’s going to work, but then you look at the test and see a result that you didn’t think possible—something that you could not predict. It’s by doing the experiments that you find things to investigate further. Even though I’m a professor now, I still spend a lot of time in the lab, as I know that when I’m at the microscope, working hands on, that’s when I get the new ideas.”